A Song-by-Song Look at What Made George Martin the Fifth Beatle. Ringo Starr played drums on the first issue of the single version. 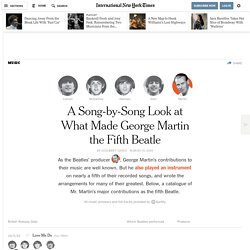 Beatles movies & footage. Picture yourself on a boat... Paperback Web Writer. Beatles & Sciences. Abbey road studio. The Beatles Never Broke Up... The Beatles Complete On Ukulele. Philip Goldberg: Beatles in India: The Retreat That Reverberates Across the Universe. Forty five years ago, the Beatles were settling into the ashram of their new guru, Maharishi Mahesh Yogi, in Rishikesh, India. 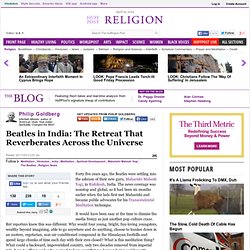 The news coverage was nonstop and global, as it had been six months earlier when the lads first met Maharishi and became public advocates for his Transcendental Meditation technique. It would have been easy at the time to dismiss the media frenzy as just another pop culture craze. But reporters knew this was different. Why would four young, bright, fun-loving youngsters, wealthy beyond imagining, able to go anywhere and do anything, choose to hunker down in an austere, vegetarian, non-air-conditioned compound in the Himalayan foothills and spend large chunks of time each day with their eyes closed? What is this meditation thing? Questions like those turned what might have been a brief media burst into a watershed moment in cultural history. The Beatles took to meditation like they had taken to Chuck Berry and Little Richard. This Day in Music Spotlight: I Want to Hold Your Hun. Special thanks to ThisDayinMusic.com. 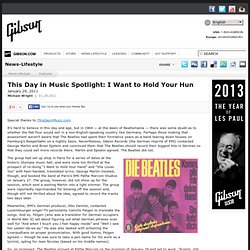 It’s hard to believe in this day and age, but in 1964 — at the dawn of Beatlemania — there was some doubt as to whether the Fab Four would sell in a non-English-speaking country like Germany. Perhaps those making that assessment weren’t aware that The Beatles had spent their formative years as a band tearing down houses on Hamburg’s Reeperbahn on a nightly basis. Nevertheless, Odeon Records (the German imprint of EMI) contacted George Martin and Brian Epstein and convinced them that The Beatles should record their biggest hits in German so that they could sell more records there. Martin and Epstein agreed. The Beatles did not. The group had set up shop in Paris for a series of dates at the historic Olympia music hall, and were none too thrilled at the prospect of re-doing “I Want to Hold Your Hand” and “She Loves You” with ham-handed, translated lyrics. 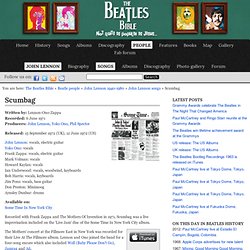