Securing modern web apps: A case for framework-aware SAST. If you were to write a web application entirely by yourself, it would be a rather daunting task. 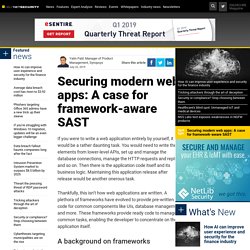 You would need to write the UI elements from lower-level APIs, set up and manage the database connections, manage the HTTP requests and replies, and so on. Then there is the application code itself and its business logic. Maintaining this application release after release would be another onerous task. Agile Teams – ASTQB. How Agile Teams Can Build Continuous Software Quality How can your Agile team work together to produce quality software products that meet requirements the first time around? 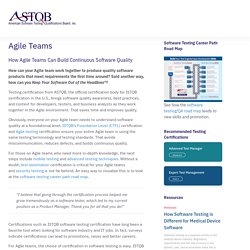 Said another way, how can you Keep Your Software Out of the Headlines®? Testing certification from ASTQB, the official certification body for ISTQB certification in the U.S., brings software quality awareness, best practices, and context for developers, testers, and business analysts as they work together in the Agile environment.

That saves time and improves quality. Obviously, everyone on your Agile team needs to understand software quality at a foundational level. For those on Agile teams who need more in-depth knowledge, the next steps include mobile testing and advanced testing techniques. “I believe that going through the certification process helped me grow tremendously as a software tester, which led to my current position as a Product Manager. Not sure where to start? The Pros and Cons of a Serverless DevOps Solution. The dream of any product owner is fully customizable production software without the expense of paying for the hardware it rests upon. 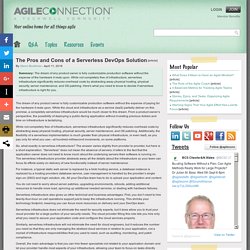 Microservices and Docker at Scale: The PB&J of Modern Systems. Summary: After predominantly being used in the build/test stage, Docker has matured and is expanding into production deployment. 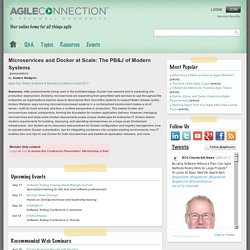 Similarly, microservices are expanding from greenfield web services to use throughout the enterprise as organizations explore ways to decompose their monolithic systems to support faster release cycles. Anders Wallgren says running microservices-based systems in a containerized environment makes a lot of sense—both for build and test, and from a runtime perspective in production. This makes Docker and microservices natural companions, forming the foundation for modern application delivery. JUnit tutorial. JUnit is a unit testing framework for the Java programming language. 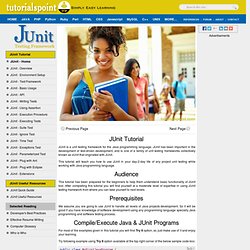 JUnit has been important in the development of test-driven development, and is one of a family of unit testing frameworks collectively known as xUnit that originated with JUnit. This tutorial will teach you how to use JUnit in your day-2-day life of any project unit testing while working with Java programming language. This tutorial has been prepared for the beginners to help them understand basic functionality of JUnit tool. After completing this tutorial you will find yourself at a moderate level of expertise in using JUnit testing framework from where you can take yourself to next levels.

We assume you are going to use JUnit to handle all levels of Java projects development. For most of the examples given in this tutorial you will find Try it option, so just make use of it and enjoy your learning. Try following example using Try it option available at the top right corner of the below sample code box: 3 - Java Tutorials. Unit Testing with JUnit. Copyright © 2007, 2008, 2009, 2010, 2011, 2012 Lars Vogel Unit testing with JUnit This tutorial explains unit testing with JUnit 4.x. It explains the creation of JUnit tests and how to run them in Eclipse or via own code. This tutorial is part of this Kindle book: 1. 1.1.

A unit test is a piece of code written by a developer that executes a specific functionality in the code which is tested. Unit tests ensure that code works as intended. Typically unit tests are created in their own project or their own source folder to avoid that the normal code and the test code is mixed. 1.2. JUnit unit test in version 4.x is a test framework which uses annotations to identify methods that specify a test. The following code shows a JUnit test method which can be created via → → → . @Test public void testMultiply() { MyClass tester = new MyClass(); assertEquals( "10 x 5 must be 50" , 50 , tester.multiply( 10 , 5 )); } JUnit assumes that all test methods can be executed in an arbitrary order. Portal:Software Testing. From Wikipedia, the free encyclopedia The Software Testing Portal Software testing is the process used to measure the quality of developed software. 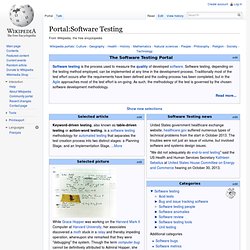 FitNesse Testing Framework. JUnit. LISA Features: Automated UI Testing. Automated UI Testing for RIA and Web 2.0 User Interface (UI) testing is one of the most prevalent forms of software testing, however it is often approached from a manual "screen-level" testing perspective.

This one was recommended by Gopal! – kobda

Increased automation of UI testing can provide important time savings and productivity gains to any QA organization, allowing an increased focus on new functionality that needs to be validated. 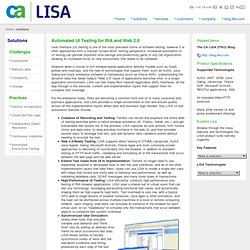 However when it comes to rich browser-based application delivery models such as SaaS, portals and mashups, and the new UI technologies that support them, such as AJAX, Java Swing and many enterprise software UI frameworks (such as Oracle ADF), understanding the dynamic data that feeds today's "Web 2.0" types of applications becomes vital. In a single application environment, LISA can test these Rich Internet Application (RIA) interfaces, all the way through to the services, content and implementation layers that support them for complete test coverage.