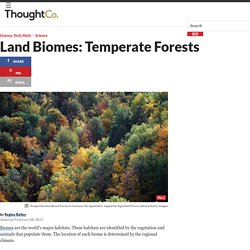 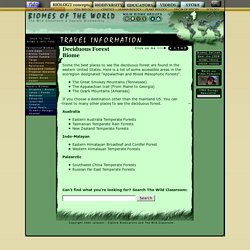 Here is a list of some accessible areas in the ecoregion designated "Appalachian and Mixed Mesophytic Forests". The Great Smokey Mountains (Tennessee) The Appalachian trail (From Maine to Georgia) The Ozark Mountains (Arkansas) If you choose a destination other than the mainland US. You can travel to many other places to see the deciduous forest. Australia. What are deciduous forests places of interest. What is the tourist activities for a deciduous forest. Biology of Plants: Plant Adaptations. Temperate Forest Trees and Plants.

Trees are the most important plants in temperate forests. 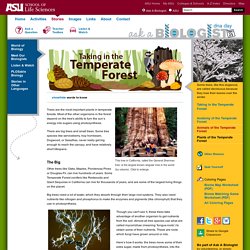 Most of the other organisms in the forest depend on the tree's ability to turn the sun’s energy into sugars using photosynthesis. There are big trees and small trees. Some tree species like serviceberry, hop hornbeam, Dogwood, or Sassifras, never really get big enough to reach the canopy, and have relatively short lifespans. The Big Other trees like Oaks, Maples, Ponderosa Pines or Douglas-Fir, can live hundreds of years. Big trees need a lot of water, which they absorb through their large root systems. How do plant adapt in the deciduous forest? - Quora. Deciduous Forest Animals - Buzzle. Plants of the temperate forest. Unlike tropical forests, temperate forests have just two layers of vegetation. 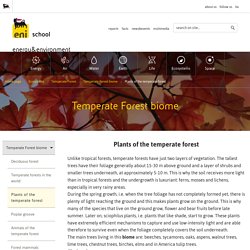 The tallest trees have their foliage generally about 15-30 m above ground and a layer of shrubs and smaller trees underneath, at approximately 5-10 m. This is why the soil receives more light than in tropical forests and the undergrowth is luxuriant: ferns, mosses and lichens, especially in very rainy areas. During the spring growth, i.e. when the tree foliage has not completely formed yet, there is plenty of light reaching the ground and this makes plants grow on the ground.

This is why many of the species that live on the ground grow, flower and bear fruits before late summer. Later on, sciophilus plants, i.e. plants that like shade, start to grow. Temperate Deciduous Forests. Plant Life Temperate deciduous forests have a great variety of plant species. 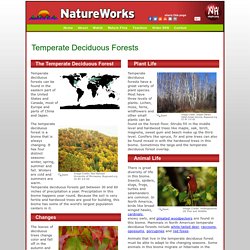 Most have three levels of plants. Lichen, moss, ferns, wildflowers and other small plants can be found on the forest floor. Shrubs fill in the middle level and hardwood trees like maple, oak, birch, magnolia, sweet gum and beech make up the third level. Conifers like spruce, fir and pine trees can also be found mixed in with the hardwood trees in this biome. Animal Life There is great diversity of life in this biome. Coyote facts. Coyotes are surprisingly timid animals, but they are often misunderstood by rural homeowners. 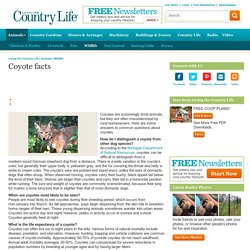 Here are some answers to common questions about coyotes. How do I distinguish a coyote from other dog species? According to the Michigan Department of Natural Resources, coyotes can be difficult to distinguish from a medium-sized German shepherd dog from a distance. There is a wide variation in the coyote's color, but generally their upper body is yellowish gray, and the fur covering the throat and belly is white to cream color. The coyote's ears are pointed and stand erect, unlike the ears of domestic dogs that often droop. When are coyotes most likely to be seen? What is the life expectancy of a coyote? What do coyotes eat? Do coyotes present any danger to people?

What Major Cities Are Located in the Temperate Forest? The temperate forest biome is found in areas with four seasons per year, including a distinct winter. 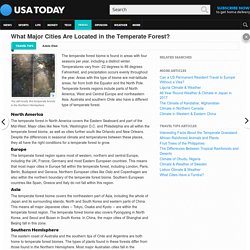 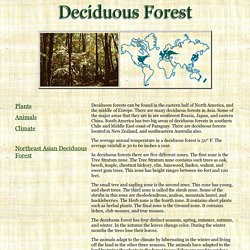 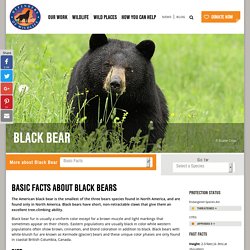 Black bears have short, non-retractable claws that give them an excellent tree-climbing ability. Black bear fur is usually a uniform color except for a brown muzzle and light markings that sometimes appear on their chests. Eastern populations are usually black in color while western populations often show brown, cinnamon, and blond coloration in addition to black. Black bears with white-bluish fur are known as Kermode (glacier) bears and these unique color phases are only found in coastal British Columbia, Canada. Diet.