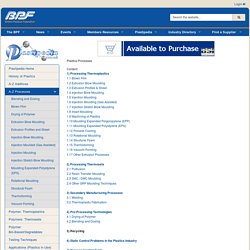 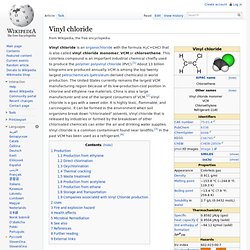 This colorless compound is an important industrial chemical chiefly used to produce the polymer polyvinyl chloride (PVC).[1] About 13 billion kilograms are produced annually. VCM is among the top twenty largest petrochemicals (petroleum-derived chemicals) in world production. The United States currently remains the largest VCM manufacturing region because of its low-production-cost position in chlorine and ethylene raw materials. China is also a large manufacturer and one of the largest consumers of VCM.[2] Vinyl chloride is a gas with a sweet odor.

It is highly toxic, flammable, and carcinogenic. Production[edit] Polyvinyl chloride. Poly(vinyl chloride), commonly abbreviated PVC, is the third-most widely produced polymer, after polyethylene and polypropylene.[4] PVC is used in construction because it is more effective than traditional materials such as copper, iron or wood in pipe and profile applications. 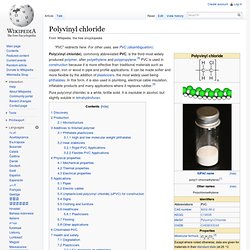 It can be made softer and more flexible by the addition of plasticizers, the most widely used being phthalates. In this form, it is also used in plumbing, electrical cable insulation, inflatable products and many applications where it replaces rubber.[5] Polypropylene. Polypropylene (PP), also known as polypropene, is a thermoplastic polymer used in a wide variety of applications including packaging and labeling, textiles (e.g., ropes, thermal underwear and carpets), stationery, plastic parts and reusable containers of various types, laboratory equipment, loudspeakers, automotive components, and polymer banknotes. 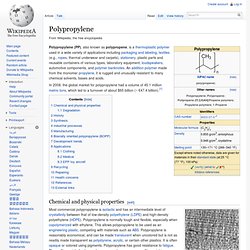 An addition polymer made from the monomer propylene, it is rugged and unusually resistant to many chemical solvents, bases and acids. In 2008, the global market for polypropylene had a volume of 45.1 million metric tons, which led to a turnover of about $65 billion (~ €47.4 billion).[1] Chemical and physical properties[edit] Degradation[edit] Polypropylene is liable to chain degradation from exposure to heat and UV radiation such as that present in sunlight.

Coal tar. Applications[edit] Pavement sealcoat[edit] Coal tar is incorporated into some parking-lot sealcoat products, which are used to protect and beautify the underlying pavement.[2] Sealcoat products that are coal-tar based typically contain 20 to 35 percent coal-tar pitch.[2] Substantial concerns have been raised about the safety of this application of coal tar, given that coal tar is known to cause cancer in humans and that several PAH compounds in coal tar are toxic to aquatic life.[3] 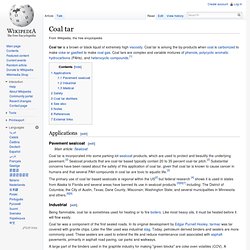 Naphthalene. Naphthalene is an organic compound with formula C 10H 8. 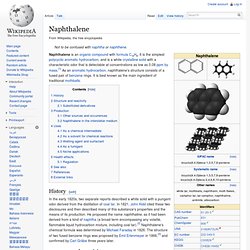 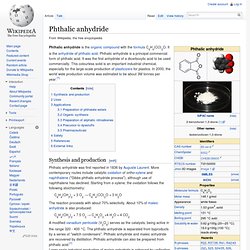 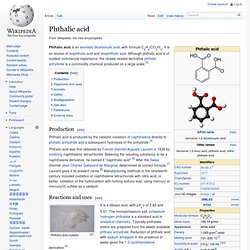 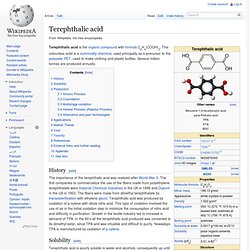 This colourless solid is a commodity chemical, used principally as a precursor to the polyester PET, used to make clothing and plastic bottles. Several million tonnes are produced annually. History[edit] The importance of the terephthalic acid was realized after World War II. Plasticizer. For plastics[edit] Plasticizers for plastics are additives, most commonly phthalate esters in PVC applications. 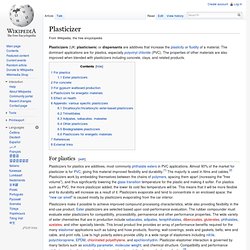 Almost 90% of the market for plasticizer is for PVC, giving this material improved flexibility and durability.[1] The majority is used in films and cables.[2] Plasticizers work by embedding themselves between the chains of polymers, spacing them apart (increasing the "free volume"), and thus significantly lowering the glass transition temperature for the plastic and making it softer.

For plastics such as PVC, the more plasticizer added, the lower its cold flex temperature will be. Petroleum. An oil refinery in Mina-Al-Ahmadi, Kuwait The use of fossil fuels such as petroleum has a negative impact on Earth's biosphere, releasing pollutants and greenhouse gases into the air and damaging ecosystems through events such as oil spills. Concern over the depletion of the earth's finite reserves of oil, and the effect this would have on a society dependent on it, is a concept known as peak oil.

Etymology[edit] The word petroleum comes from Greek: πέτρα (petra) for rocks and Greek: ἔλαιον (elaion) for oil. History[edit] Early history[edit] Petroleum, in one form or another, has been used since ancient times, and is now important across society, including in economy, politics and technology. Modern history[edit] Naphtha.

Viscoelastic Phase Separation in Epoxy/Thermoplastic Blends. Thermosetting resins are usually low molecular weight monomers or oligomers having functional groups for cross-linking reaction. Transesterification. Polyester. SEM picture of a bend in a high-surface area polyesterfiber with a seven-lobed cross section Close-up of a polyester shirt Polyester is a category of polymers which contain the ester functional group in their main chain. Although there are many polyesters, the term "polyester" as a specific material most commonly refers to polyethylene terephthalate (PET).

Bates and his team stumbled upon the completely new material quite by accident. "My students were exploring the mechanical properties of polymers made from poly(lactide)--a derivative of corn--and poly(isoprene)--a synthetic form of natural rubber," Bates said. "They discovered a new and unexplainable x-ray scattering pattern." The unusual pattern turned out to be associated with a long-predicted crystal structure, now known as the Frank-Kasper sigma phase. – simo88

The interesting thing about block copolymers is that they can spontaneously self-assemble into tiny nanoscale structures, including spheres, when cooled. The spheres form because the different blocks, though chemically connected, repel each other like oil and vinegar. To overcome this self-revulsion, the material organizes itself so that a core of one type of block circles in on itself, leaving a "halo" of the second type of block hanging out like a hairy fringe. – simo88

Bates and his research team at the University of Minnesota in Minneapolis have discovered an unusual type of soft material that was conceived of over 50 years ago, but has never before been found in a plastic--although it has been seen in stainless steel and other metal alloys. Scientists and engineers create the 'perfect plastic' (10/7/2011) Researchers at the University of Leeds and Durham University have solved a long-standing problem that could revolutionize the way new plastics are developed.

The mathematical models used put together two pieces of computer code. The first predicts how polymers will flow based on the connections between the string-like molecules they are made from. A second piece of code predicts the shapes that these molecules will take when they are created at a chemical level. These models were enhanced by experiments on carefully synthesised 'perfect polymers' created in labs of the Microscale Polymer Processing project. – simo88

Solving a tangled polymer problem. New elastic material changes color in UV light. Researchers from North Carolina State University have created a range of soft, elastic gels that change color when exposed to ultraviolet (UV) light -- and change back when the UV light is removed or the material is heated up.

The gels are impregnated with a type of photochromic compound called spiropyran. Spiropyrans change color when exposed to UV light, and the color they change into depends on the chemical environment surrounding the material. – simo88

Polyhydroxyalkanoates. Polymer. Polymer Physics. Polymer. IUPAC definition Substance composed of macromolecules. Note: Applicable to substance macromolecular in nature like cross-linked systems that can be considered as one macromolecule. The term "polymer" derives from the ancient Greek word πολύς (polus, meaning "many, much") and μέρος (meros, meaning "parts"), and refers to a molecule whose structure is composed of multiple repeating units, from which originates a characteristic of high relative molecular mass and attendant properties.[6] The units composing polymers derive, actually or conceptually, from molecules of low relative molecular mass.[7] The term was coined in 1833 by Jöns Jacob Berzelius, though with a definition distinct from the modern IUPAC definition.[8][9] The modern concept of polymers as covalently bonded macromolecular structures was proposed in 1920 by Hermann Staudinger, who spent the next decade finding experimental evidence for this hypothesis.[10] Common examples[edit]