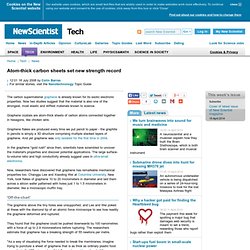 Now two studies suggest that the material is also one of the strongest, most elastic and stiffest materials known to science. Graphene crystals are atom-thick sheets of carbon atoms connected together in hexagons, like chicken wire. Graphene flakes are produced every time we put pencil to paper - the graphite in pencils is simply a 3D structure comprising multiple stacked layers of graphene. And yet graphene was only isolated for the first time in 2004. In the graphene "gold rush" since then, scientists have scrambled to uncover the material's properties and discover potential applications.

Now, researchers have discovered that graphene has remarkable mechanical properties too. 'Off-the-chart' The graphene above the tiny holes was unsupported, and Lee and Wei poked at these with the diamond tip of an atomic force microscope to see how readily the graphene deformed and ruptured. Sticky problem (YouTube) Hard Materials: Experiment and Modelling issues. The possibility to synthesize new materials with hardness similar or even larger than that of diamond has become of fundamental and technological interest for chemists, physicists and in particular for the whole materials scientists community. 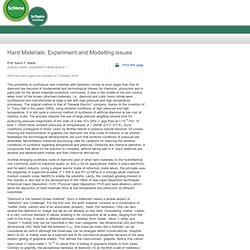 It was in the middle of the last century when most of the known ultra-hard materials, i.e., diamond and cubic boron nitride were synthesized and manufactured at large scale with high pressure and high temperature processes. The original method is that of “General Electric” company, thanks to the invention of H. Tracy Hall in the years 1950s, using extreme conditions of high pressure and high temperature. It is still quite a common method of synthesis of artificial diamond at low cost at industry scale.

The process requires the use of large presses weighing several tons for producing pressure magnitudes of the order of a few 10’s GPa (1 giga Pascal = 10 9 Pa= 10 kbar = 10000 times ambient pressure) at temperatures of ~ 3000K (0°C= 273 K). By adding graphene, researchers create superior polymer. Researchers at Northwestern University and Princeton University have created a new kind of polymer that, because of its extraordinary thermal and mechanical properties, could be used in everything from airplanes to solar cells. 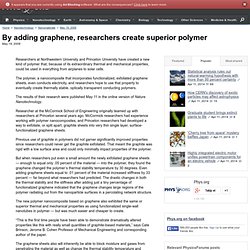 The polymer, a nanocomposite that incorporates functionalized, exfoliated graphene sheets, even conducts electricity, and researchers hope to use that property to eventually create thermally stable, optically transparent conducting polymers. The results of their research were published May 11 in the online version of Nature Nanotechnology. Researcher at the McCormick School of Engineering originally teamed up with researchers at Princeton several years ago.

McCormick researchers had experience working with polymer nanocomposites, and Princeton researchers had developed a way to exfoliate, or split apart, graphite sheets into very thin single layer, surface-functionalized graphene sheets. “I think it has enormous potential,” Brinson says. A Step Toward Better Electronics.

Unlike semiconductors such as silicon, pure graphene is a zero band-gap material, making it difficult to electrically “turn off” the flow of current through it. Therefore, pristine graphene is not appropriate for the digital circuitry that comprises the vast majority of integrated circuits. – simo88

A Step Toward Better Electronics Researchers develop new way to oxidize promising graphene Mark Hersam Mark C. Hersam Tweet printerenvelope EVANSTON, Ill. --- Researchers at Northwestern University have developed a new method for chemically altering graphene, a development that could be a step toward the creation of faster, thinner, flexible electronics. Highly desired for its many promising attributes, graphene is a one-atom thick, honeycomb-shaped lattice of carbon atoms with exceptional strength and conductivity. Among graphene’s many possible applications is electronics: Many experts believe it could rival silicon, transforming integrated circuits and leading to ultra-fast computers, cellphones and related portable electronic devices. But first, researchers must learn how to tune the electronic properties of graphene -- not an easy feat, given a major challenge intrinsic to the material. Unlike semiconductors such as silicon, pure graphene is a zero band-gap material, making it – simo88

( graphene ) Physics History: October 2009. Scanning electron micrograph of a strongly crumpled graphene sheet on a silicon wafer (Foundation of Fundamental Research on Matter, the Netherlands). Scientists often find ingenious ways to attain their research objectives, even if that objective is a truly two-dimensional material that many physicists felt could not be grown.

In 2003, one ingenious physicist took a block of graphite, some Scotch tape and a lot of patience and persistence and produced a magnificent new wonder material that is a million times thinner than paper, stronger than diamond, more conductive than copper. It is called graphene, and it took the physics community by storm when the first paper appeared the following year. The man who first discovered graphene, along with his colleague, Kostya Novoselov, is Andre Geim. Geim studied at the Moscow Physical-technical University and earned his PhD from the Institute of Solid State Physics in Chernogolovka, Russia. Physics History.