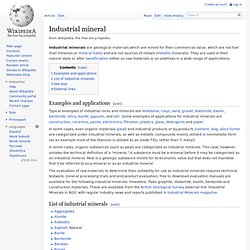 They are used in their natural state or after beneficiation either as raw materials or as additives in a wide range of applications. Examples and applications[edit] Typical examples of industrial rocks and minerals are limestone, clays, sand, gravel, diatomite, kaolin, bentonite, silica, barite, gypsum, and talc. Some examples of applications for industrial minerals are construction, ceramics, paints, electronics, filtration, plastics, glass, detergents and paper.

In some cases, even organic materials (peat) and industrial products or by-products (cement, slag, silica fume) are categorized under industrial minerals, as well as metallic compounds mainly utilized in nonmetallic form (as an example most of the titanium is utilized as an oxide TiO2 rather than Ti metal). Biomineralization. Glomerula piloseta (Sabellidae), longitudinal section of the tube, aragonitic spherulitic prismatic structure IUPAC definition Mineralization caused by cell-mediated phenomena.[1][a] Biomineralization is the process by which living organisms produce minerals, [2]often to harden or stiffen existing tissues. 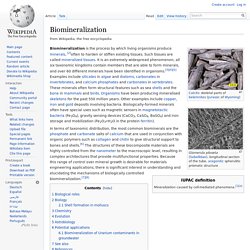 Such tissues are called mineralized tissues. It is an extremely widespread phenomenon; all six taxonomic kingdoms contain members that are able to form minerals, and over 60 different minerals have been identified in organisms.[3][4][5] Examples include silicates in algae and diatoms, carbonates in invertebrates, and calcium phosphates and carbonates in vertebrates. Biological roles[edit] Biominerals perform a variety of roles in organisms, the most important being support, defense and feeding.[9] Biology[edit] If present on a super-cellular scale, biominerals are usually deposited by a dedicated organ, which is often defined very early in the embryological development. 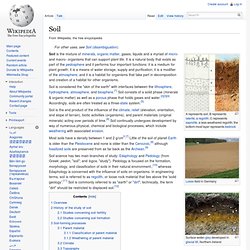 It is a natural body that exists as part of the pedosphere and it performs four important functions: it is a medium for plant growth; it is a means of water storage, supply and purification; it is a modifier of the atmosphere; and it is a habitat for organisms that take part in decomposition and creation of a habitat for other organisms. Soil is considered the "skin of the earth" with interfaces between the lithosphere, hydrosphere, atmosphere, and biosphere.[1] Soil consists of a solid phase (minerals & organic matter) as well as a porous phase that holds gases and water.[2][3][4] Accordingly, soils are often treated as a three-state system.[5] Overview[edit] Soil is a major component of the Earth's ecosystem.

Soils can effectively remove impurities, kill disease agents, and degrade contaminants. History of the study of soil[edit] In 1856 J. Curtis F. Ilmenite. Crystal structure of ilmenite Ilmenite is a weakly magnetic titanium-iron oxide mineral which is iron-black or steel-gray. 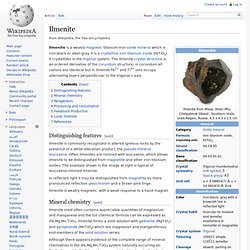 It is a crystalline iron titanium oxide (FeTiO 3). It crystallizes in the trigonal system. The ilmenite crystal structure is an ordered derivative of the corundum structure; in corundum all cations are identical but in ilmenite Fe2+ and Ti4+ ions occupy alternating layers perpendicular to the trigonal c axis. Distinguishing features[edit] Ilmenite is commonly recognized in altered igneous rocks by the presence of a white alteration product, the pseudo-mineral leucoxene. In reflected light it may be distinguished from magnetite by more pronounced reflection pleochroism and a brown-pink tinge. Ilmenite is weakly magnetic, with a weak response to a hand magnet. Alum (douple sulfate) Bulk alum Chemical properties[edit] Uses[edit] Industrial uses[edit] Alum has been used at least since Roman times for purification of drinking water[2] and industrial process water. 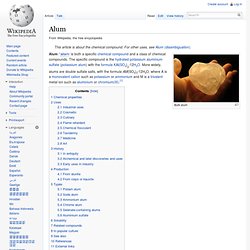 Between 30 and 40 ppm of alum[2][3] for household wastewater, often more for industrial wastewater,[4] is added to the water so that the negatively charged colloidal particles clump together into "flocs", which then float to the top of the liquid, settle to the bottom of the liquid, or can be more easily filtered from the liquid, prior to further filtration and disinfection of the water. Cosmetic[edit] Culinary[edit] Alum powder, found in the spice section of many grocery stores, may be used in pickling recipes as a preservative to maintain fruit and vegetable crispness.Alum is used as the acidic component of some commercial baking powders.Alum was used by bakers in England during the 1800s to make bread whiter.[10] The Sale of Food and Drugs Act 1875 prevented this and other adulterations.[11]