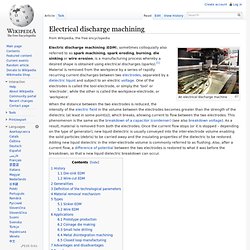 One of the electrodes is called the tool-electrode, or simply the ‘tool’ or ‘electrode’, while the other is called the workpiece-electrode, or ‘workpiece’. When the distance between the two electrodes is reduced, the intensity of the electric field in the volume between the electrodes becomes greater than the strength of the dielectric (at least in some point(s)), which breaks, allowing current to flow between the two electrodes. History[edit] Die-sink EDM[edit] Two Russian scientists, B. Wire-cut EDM[edit] Generalities[edit] Ferrite (iron) Iron-carbon phase diagram, showing the conditions under which ferrite (α) is stable. 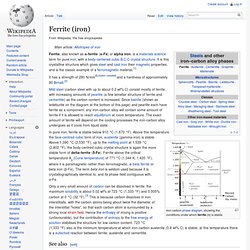 Ferrite, also known as α-ferrite (α-Fe) or alpha iron, is a materials science term for pure iron, with a body-centered cubic B.C.C crystal structure. It is this crystalline structure which gives steel and cast iron their magnetic properties, and is the classic example of a ferromagnetic material.[1] It has a strength of 280 N/mm2[citation needed] and a hardness of approximately 80 Brinell.[2] Mild steel (carbon steel with up to about 0.2 wt% C) consist mostly of ferrite, with increasing amounts of pearlite (a fine lamellar structure of ferrite and cementite) as the carbon content is increased.

Since bainite (shown as ledeburite on the diagram at the bottom of this page) and pearlite each have ferrite as a component, any iron-carbon alloy will contain some amount of ferrite if it is allowed to reach equilibrium at room temperature. Austenite. Iron-carbon phase diagram, showing the conditions under which austenite (γ) is stable in carbon steel. 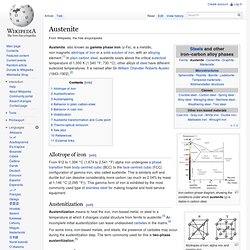 Allotropes of iron; alpha iron and gamma iron Austenite, also known as gamma phase iron (γ-Fe), is a metallic, non-magnetic allotrope of iron or a solid solution of iron, with an alloying element.[1] In plain-carbon steel, austenite exists above the critical eutectoid temperature of 1,000 K (1,340 °F; 730 °C); other alloys of steel have different eutectoid temperatures.

It is named after Sir William Chandler Roberts-Austen (1843–1902).[2] History of the Manufacture of Iron in All Ages: And Particularly in the ... - James Moore Swank. European Steel and Alloy Grades / Numbers. How To Passivate Stainless Steel Parts. Article From: 10/1/2003 Modern Machine Shop, Terry A. 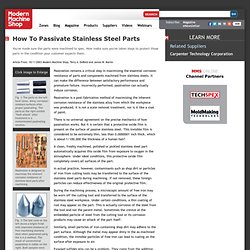 DeBold and James W. Martin Click Image to Enlarge Fig. 1-The parts on the left have clean, shiny, corrosion-resistant surfaces after proper passivating. The parts on the right exhibit "flash attack" after treatment in a contaminated passivating solution. Passivation is designed to maximize the inherent corrosion resistance of stainless steel parts after machining. Fig. 3-The test cone on the left shows a bright finish with improved resistance of free-machining stainless steel when passivated using the A-A-A method.

Passivation remains a critical step in maximizing the essential corrosion resistance of parts and components machined from stainless steels. Passivation (chemistry) Passivation, in physical chemistry and engineering, refers to a material becoming "passive," that is, being less affected by environmental factors such as air and water. 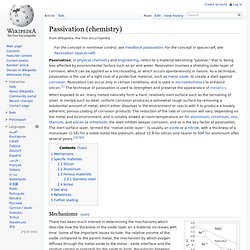 CTL-Rouging of Stainless Steel Surfaces. Regarding pitting of stainless steels in chloride-containing environments, as are frequently encountered in pharmaceutical and chemical process industries, it has been found that for a particular stainless steel in a particular chloride environment, there is a specific temperature above which certain stainless steels begin to immediately corrode and below which corrosion does not begin in an indefinitely long time. 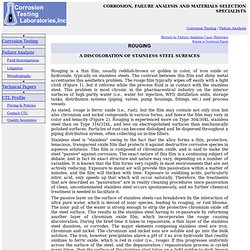 This temperature is called the Critical Pitting Temperature (CPT). Although corrosion begins immediately when the stainless steel is exposed above the CPT, as measured by potentiostatic monitoring (ASTM G 150), it generally takes as much as 24 to 720 hours of exposure for pitting to develop to the extent that permits observation of pit sites, as typified by localized rouging, even at 20X magnification aided by surface scratching techniques. Rouging. You have just installed an all clean and shiny stainless steel water system. 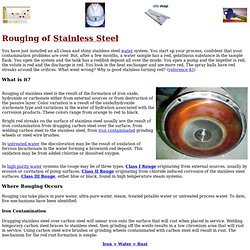 You start up your process, confident that your contamination problems are over. But, after a few months, a water sample has a red, gelatinous substance in the sample flask. You open the system and the tank has a reddish deposit all over the inside. You open a pump and the impeller is red, the volute is red and the discharge is red. You look in the heat exchanger and see more red. What is it? In high purity water systems the rouge may be of three types: Class I Rouge originating from external sources, usually by erosion or cavitation of pump surfaces. Where Rouging Occurs.