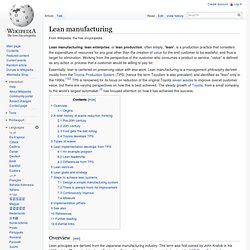 The implementation of smooth flow exposes quality problems that already existed, and thus waste reduction naturally happens as a consequence. The advantage claimed for this approach is that it naturally takes a system-wide perspective, whereas a waste focus sometimes wrongly assumes this perspective. Both lean and TPS can be seen as a loosely connected set of potentially competing principles whose goal is cost reduction by the elimination of waste.[5] These principles include: Pull processing, Perfect first-time quality, Waste minimization, Continuous improvement, Flexibility, Building and maintaining a long term relationship with suppliers, Autonomation, Load leveling and Production flow and Visual control.

Origins[edit] Lean aims to make the work simple enough to understand, do and manage. A brief history of waste reduction thinking[edit] 20th century[edit] (6#6): Porsche 911 (997) Manufacturing: Just-in-Time System. What is just-in-time manufacturing (JIT manufacturing. Just-in-time (JIT) manufacturing is a production model in which items are created to meet demand, not created in surplus or in advance of need. 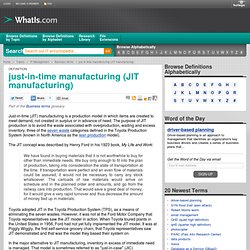 The purpose of JIT production is to avoid the waste associated with overproduction, waiting and excess inventory, three of the seven waste categories defined in the Toyota Production System (known in North America as the lean production model). The JIT concept was described by Henry Ford in his 1923 book, My Life and Work: We have found in buying materials that it is not worthwhile to buy for other than immediate needs.

We buy only enough to fit into the plan of production, taking into consideration the state of transportation at the time. If transportation were perfect and an even flow of materials could be assured, it would not be necessary to carry any stock whatsoever. Toyota adopted JIT in the Toyota Production System (TPS), as a means of eliminating the seven wastes. Harley-Davidson's Just-in-Time (JIT) Journey. Abstract: process control, and JIT. 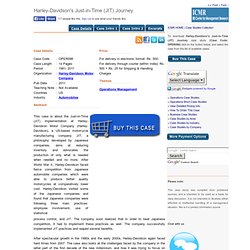 The company soon realized that in order to beat Japanese competition, it had to implement these practices as well. The company successfully implemented JIT practices and reaped several benefits. After spectacular growth in the 1990s and the early 2000s, Harley-Davidson again faced hard times from 2007. The case also looks at the challenges faced by the company in the latter part of the first decade of the new millennium, and how it was trying to focus on ‘continuous improvement' in a bid to bring itself back into profits. 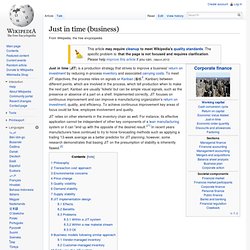 To meet JIT objectives, the process relies on signals or Kanban (看板? , Kanban) between different points, which are involved in the process, which tell production when to make the next part. Kanban are usually 'tickets' but can be simple visual signals, such as the presence or absence of a part on a shelf. Implemented correctly, JIT focuses on continuous improvement and can improve a manufacturing organization's return on investment, quality, and efficiency. To achieve continuous improvement key areas of focus could be flow, employee involvement and quality. JIT relies on other elements in the inventory chain as well. The philosophy of JIT is simple: the storage of unused inventory is a waste of resources. Inventory is seen as incurring costs, or waste, instead of adding and storing value, contrary to traditional accounting.

Just-In-Time Manufacturing (JIT) Introduction Just-in-time manufacturing was a concept introduced to the United States by the Ford motor company. 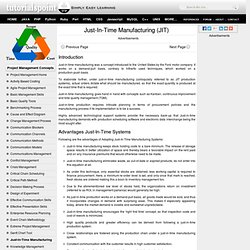 It works on a demand-pull basis, contrary to hitherto used techniques, which worked on a production-push basis. To elaborate further, under just-in-time manufacturing (colloquially referred to as JIT production systems), actual orders dictate what should be manufactured, so that the exact quantity is produced at the exact time that is required.