Your Mobile Phone Is The Least Social Device You Own. Editor’s note: Jack Krawczyk is Senior Product Marketing Manager at StumbleUpon, the discovery platform. 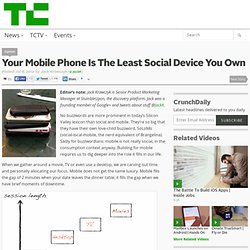 Jack was a founding member of Google+ and tweets about stuff @JackK. No buzzwords are more prominent in today’s Silicon Valley lexicon than social and mobile. They’re so big that they have their own love-child buzzword, SoLoMo (social-local-mobile, the nerd equivalent of Brangelina). Sadly for buzzwordians: mobile is not really social, in the consumption context anyway. Building for mobile requires us to dig deeper into the role it fills in our life. When we gather around a movie, TV or even use a desktop, we are carving out time and personally allocating our focus. As we have personalized our media, we have decreased the number of people viewing it together.

Build for Bursts – The New Mobile Way The unique nature of mobile requires us to develop for bursts in usage, rather than sustained usage as we have built for in other media. Don’t Know How To Code? Use Scroll Kit To Build Your Next Website. So this thing called the Internet makes it easy for pretty much anyone to have a voice and get messages across. 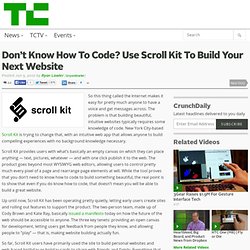 The problem is that building beautiful, intuitive websites typically requires some knowledge of code. New York City-based Scroll Kit is trying to change that, with an intuitive web app that allows anyone to build compelling experiences with no background knowledge necessary. Scroll Kit provides users with what’s basically an empty canvas on which they can place anything — text, pictures, whatever — and with one click publish it to the web. The product goes beyond most WYSIWYG web editors, allowing users to control pretty much every pixel of a page and rearrange page elements at will.

While the tool proves that you don’t need to know how to code to build something beautiful, the real point is to show that even if you do know how to code, that doesn’t mean you will be able to build a great website. App Devs, Grab Your Credit Cards: You Can Now Buy Mobile-Only Ads On Facebook. First Impressions On Fluent, The Startup Promising “The Future Of Email” Y Combinator’s Paul Graham recently begged entrepreneurs to consider “frightening ambitious startup ideas,” like building a better search engine or replacing universities. 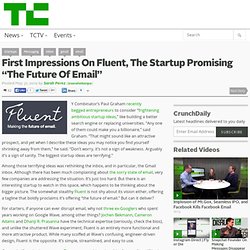 “Any one of them could make you a billionaire,” said Graham. “That might sound like an attractive prospect, and yet when I describe these ideas you may notice you find yourself shrinking away from them,” he said. “Don’t worry, it’s not a sign of weakness. Arguably it’s a sign of sanity. The biggest startup ideas are terrifying.” Among those terrifying ideas was rethinking the inbox, and in particular, the Gmail inbox. For starters, if anyone can ever disrupt email, why not three ex-Googlers who spent years working on Google Wave, among other things? Currently, if you had to compare Fluent to something, then “the future of email” looks a lot like a web-based version of Sparrow, an email client which has been achieved some popularity among the Mac/iOS crowd.

“Email hasn’t been innovated in 20 years,” explains Adams. Southeast Meetup Reminders: Savannah, Raleigh, And Charlotte Are Set, Atlanta Still Iffy. If you’ve been keeping up at all, you should know that we’re planning a tour of the Southeast during the second week of July. 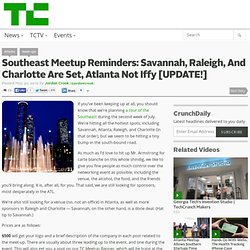 We’re hitting all the hottest spots, including Savannah, Atlanta, Raleigh, and Charlotte (in that order), but we seem to be hitting a tiny bump in the south-bound road. As much as I’d love to hit up Mr. Armstrong for carte blanche on this whole shindig, we like to give you fine people as much control over the networking event as possible, including the venue, the alcohol, the food, and the friends you’ll bring along. It is, after all, for you. That said, we are still looking for sponsors, most desperately in the ATL. We’re also still looking for a venue (no, not an office) in Atlanta, as well as more sponsors in Raleigh and Charlotte — Savannah, on the other hand, is a done deal. Prices are as follows: $500 will get your logo and a brief description of the company in each post related to the meet-up. Here are the details that are already set in stone: The 21st Century Gold Rush Announced At Disrupt: Raw Data. President Obama has a “high geek quotient” according to his senior technology advisor, Todd Park. 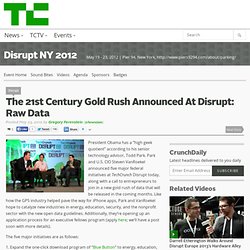 Park and U.S. CIO Steven VanRoekel announced five major federal initiatives at TechCrunch Disrupt today, along with a call to entrepreneurs to join in a new gold rush of data that will be released in the coming months. Like how the GPS industry helped pave the way for iPhone apps, Park and VanRoekel hope to catalyze new industries in energy, education, security, and the nonprofit sector with the new open data guidelines.