Using Horizontal Lines in Photography. This tip builds on the previous one on Working the Lines in your Photography. 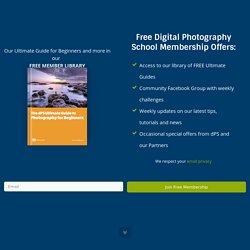 There’s something about a horizontal line in an image that conveys a message of ‘stability’ or even ‘rest’. Horizons, fallen trees, oceans, sleeping people – all of these subjects have something about them that speaks either of permanency and timelessness or rest. Horizons are the most common horizontal line to be found in photographs and they often act as a dividing point in a photograph – in effect an anchor that the rest of the image is formed around.

Three by Alberto Arochas on 500px If you want to accentuate the calming stable impact of a horizon one effective technique to use is to shoot your images with horizontal framing (with the longest part of your cameras frame from left to right. Alternatively if you want to reemphasize horizontal lines shoot with you camera in a vertical framing. Horizons should generally not be placed in the middle of your frame. Don't Forget Me by Ben Heine on 500px. How Diagonal Lines add Direction and Dynamics to your Photos. Introduction This is now my 3rd post on using lines as a composition technique, and in this post we’re going to be looking at the effect that adding diagonal lines does to a photo. 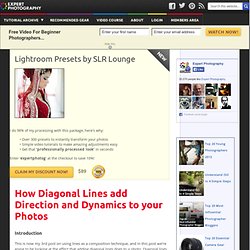 Diagonal lines are important factors to try add to your photos now and then, as they create tension and dynamics in a photo and lead the eyes in a particular direction. When I add lines to a photo, I liken it to hanging photos on a wall; it’s either go to be perfectly aligned, or poorly aligned. What I mean by this is that if your lines are almost aligned with each other, it just looks like a mistake and needs straightening. Diagonal lines aren’t compared to the frame of the photo in the same way that horizontal and vertical lines are, so they have the freedom to move around and do what you want them to do, which in many ways, makes them much more useful. 3 Types Of Diagonals.

Using Lines in Photography - GloriaHopkins.Com. By Gloria Hopkins excerpt from Natural Design: Image Design for Nature Photographers Lines are one of the most basic elements in image design and their uses are many from functional to artistic. 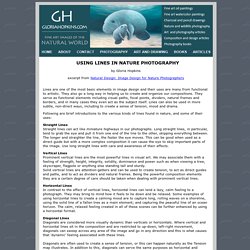 They also go a long way in helping us to create and organize our compositions. They serve as functional elements including visual paths, focal points, dividers, natural frames and borders, and in many cases they even act as the subject itself. Lines can also be used in more subtle, non-direct ways, including to create a sense of tension, mood and drama. Following are brief introductions to the various kinds of lines found in nature, and some of their uses:

How to Use Leading Lines to Improve Your Composition. Leading lines are one of the most effective and under-utilised compositional tools available to photographers. 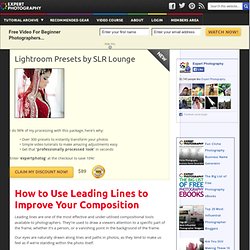 They’re used to draw a viewers attention to a specific part of the frame, whether it’s a person, or a vanishing point in the background of the frame. Our eyes are naturally drawn along lines and paths in photos, as they tend to make us feel as if we’re standing within the photo itself. It’s important to understand how to use leading lines effectively, because if they’re used incorrectly, they will be more detrimental than anything. Leading Lines VS. Paths To be honest, there’s not much difference between the two. Implied Lines in Composition. Implied lines can be created by a direction of travel of a moving object. 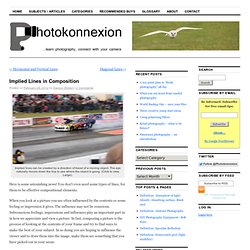 The eye naturally moves down the line to see where the object is going. (Click to view Large). Here is some astonishing news! You don’t even need some types of lines, for them to be effective compositional elements. When you look at a picture you are often influenced by the contents or some feeling or impression it gives. A social Documentary photography blog. I took this for the final assignment in people and place. 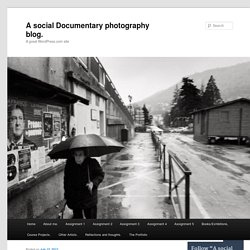 I was interested in what the smiley face looking at the viewer would bring to the feeling. I like the idea but this result, wasn’t satisfying to me. I think the problem is the way the pole breaks the frame up. Having said that it is interesting that there are two eye lines, one from the man to the couple into the frame.