Getting Over Sylvia Plath. Her husband is the title of a previous book about the English poet Ted Hughes, reflecting the odd asymmetry of his fame. 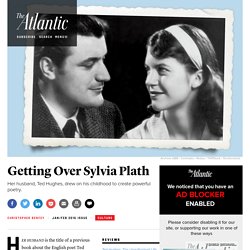 Hughes, who died of cancer in 1998 at the age of 68, is best known in the United States for his six years of marriage to Sylvia Plath—perhaps the most closely examined marriage in English literary history. He’s even better known for the end of that marriage, in 1963. Plath—separated from Hughes, who had begun an affair with the translator and advertising copywriter Assia Wevill—plugged the kitchen doors of her London flat with towels and turned on the gas oven, leaving bread and milk out for their two young children, safe in a nearby room.

Erich Fromm on the art of loving and what is keeping us from mastering it, Vivian Gornick on creativity, Maira Kalman's love letter to dogs, and more. Hello, Molly! 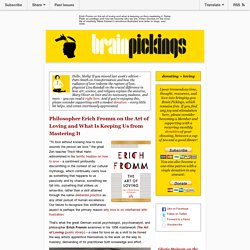 If you missed last week's edition – Patti Smith on transformation and how the radiance of love redeems the rupture of loss, physicist Lisa Randall on the crucial difference in how art, science, and religion explain the universe, Mary Oliver on love and its necessary madness, and more – you can read it right here. And if you're enjoying this, please consider supporting with a modest donation – every little bit helps, and comes enormously appreciated. Philosopher Erich Fromm on the Art of Loving and What Is Keeping Us from Mastering It That's what the great German social psychologist, psychoanalyst, and philosopher Erich Fromm examines in his 1956 masterwork The Art of Loving (public library) – a case for love as as a skill to be honed the way artists apprentice themselves to the work on the way to mastery, demanding of its practitioner both knowledge and effort.

Fromm writes: Fromm considers our warped perception of love's necessary yin-yang: "A lot of us humans," Ursula K. Sylvia Plath: Quotes on Birthdays, Birth, Death. On Sylvia Plath’s birthday — tomorrow, October 27 — we inevitably trot out the tributes for the brilliant, doomed poet, who remains as much a cultural force as ever. 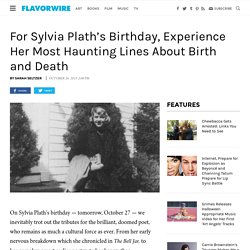 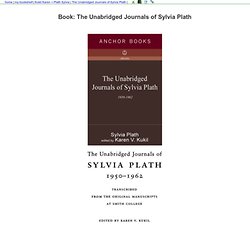 Seeing Sylvia Plath With New Eyes - Cultural Studies. In 2004, six years after Hughes’s death, his daughter Frieda restored the collection to the form her mother had intended. 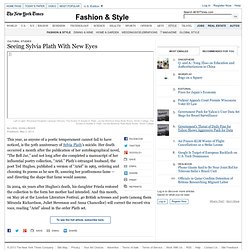 And this month, on May 26 at the London Literature Festival, 40 British actresses and poets (among them Miranda Richardson, Juliet Stevenson and Anna Chancellor) will correct the record viva voce, reading “Ariel” aloud in the order Plath set. In the United States, she is also undergoing a kind of resurrection and image overhaul, spearheaded by young women and by poets, male and female, like Mark Wunderlich, who created a class at Bennington College a few years ago called “The Problem of Plath.”

When he announced the course description, he recalls: “My colleagues all thought I was insane. They thought I was going to attract every depressive at Bennington; that every cutter on campus would sign up for this class.” In the event, 50 undergraduates — out of a student body of 600 — applied (most of them reasonably well adjusted). Ms. Ms. Sylvia plath quotes. Lady Lazarus"

On "Lady Lazarus" Robert Phillips S he fears, in "Sheep in Fog," that her search will lead instead to a "starless and fatherless" heaven, carrying her into dark waters. 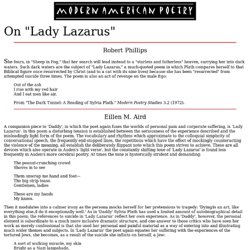 Such dark waters are the subject of "Lady Lazarus," a much-quoted poem in which Plath compares herself to that Biblical figure once resurrected by Christ (and to a cat with its nine lives) because she has been "resurrected" from attempted suicide three times. The poem is also an act of revenge on the male Ego: Out of the ash I rise with my red hair And I eat men like air.

Eillen M. A companion piece to 'Daddy', in which the poet again fuses the worlds of personal pain and corporate suffering, is ‘Lady Lazarus'. The peanut-crunching crowd Shoves in to see Them unwrap me hand and foot— The big strip tease. Then it modulates into a calmer irony as the persona mocks herself for her pretensions to tragedy: 'Dying/is an art, like everything else.

Sylvia Plath's Drawings. By Maria Popova “The pleasure of odds and ends,” in pen, ink, and literary history. 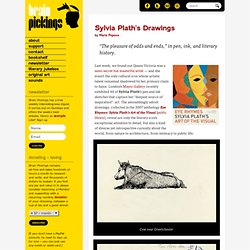 Last week, we found out Queen Victoria was a semi-secret but masterful artist — and she wasn’t the only cultural icon whose artistic talent remained shadowed by her primary claim to fame. London’s Mayor Gallery recently exhibited 44 of Sylvia Plath’s pen and ink sketches that capture her “deepest source of inspiration”: art. The astonishingly adroit drawings, collected in the 2007 anthology Eye Rhymes: Sylvia Plath’s Art of the Visual (public library), reveal not only the literary icon’s exceptional attention to detail, but also a kind of diverse yet introspective curiosity about the world, from nature to architecture, from intimacy to public life. Sanghvi. Burton. Three Women - Sylvia Plath. Waking In Winter by Sylvia Plath Classic Famous Poet.

PlathProfilesVolume6. Sylvia Plath reads "Tulips" Sylvia Plath’s ‘The Bell Jar’: A Visual History. The 'Always' and 'Never' Life of Sylvia Plath - Karen Swallow Prior. "If neurotic is wanting two mutually exclusive things at one and the same time," she wrote in The Bell Jar, "then I'm neurotic as hell. 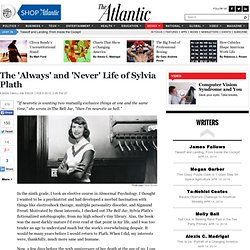 " In the ninth grade, I took an elective course in Abnormal Psychology. I thought I wanted to be a psychiatrist and had developed a morbid fascination with things like electroshock therapy, multiple personality disorder, and Sigmund Freud. Motivated by these interests, I checked out The Bell Jar, Sylvia Plath's fictionalized autobiography, from my high school's tiny library. Alas, the book was the most darkly mature I'd ever read at that point in my life, and I was too tender an age to understand much but the work's overwhelming despair. It would be many years before I would return to Plath. Sylvia Plath Info. Sylvia Plath reads "The Applicant" Sylvia Plath Forum: Cut.

Poetry Analysis/ Discussion A thought that I take away with me after reflection on "Cut" is the on bloodlines. 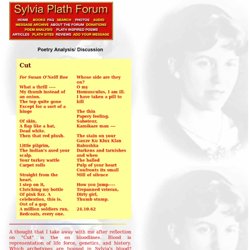 Blood is representation of life force, genetics, and history. Which archetypes are housed in Sylvia's blood? Cultural, historical, and global lineages all pour out of her as well as her biological hertiage. The mention of Homunculus is quite interesting and opens up a huge alchemical arena where she's trying to atone and purify (with the help of an "ally") these lineages which course through her veins, but in the end she still remains a "dirty girl".

Kind of intriguing. Meredith Charlottesville, VA, USA Tuesday, June 6, 2006 Cut by Sylvia Plath is by far one of the most attractive poems offered by American literature. There are many psychological entities that indulge almost subconsciously simply by reading her writings this poem in particular such as the appeal towards a true suicidal figure that lies within our urge to be a martyr , or heroic figure in life.