Recharging the Mountains. Nepal has always had too much rain or too little. 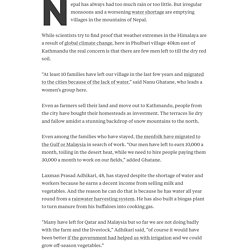 But irregular monsoons and a worsening water shortage are emptying villages in the mountains of Nepal. While scientists try to find proof that weather extremes in the Himalaya are a result of global climate change, here in Phulbari village 40km east of Kathmandu the real concern is that there are few men left to till the dry red soil. “At least 10 families have left our village in the last few years and migrated to the cities because of the lack of water,” said Nanu Ghatane, who leads a women’s group here.

Even as farmers sell their land and move out to Kathmandu, people from the city have bought their homesteads as investment. First farm to grow veg in a desert using only sun and seawater. Sundrop By Alice Klein Sunshine and seawater. 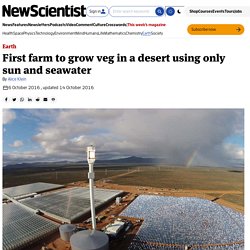 That’s all a new, futuristic-looking greenhouse needs to produce 17,000 tonnes of tomatoes per year in the South Australian desert. It’s the first agricultural system of its kind in the world and uses no soil, pesticides, fossil fuels or groundwater. As the demand for fresh water and energy continues to rise, this might be the face of farming in the future. An international team of scientists have spent the last six years fine-tuning the design – first with a pilot greenhouse built in 2010; then with a commercial-scale facility that began construction in 2014 and was officially launched today. 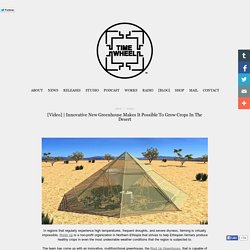 Roots Up is a non-profit organization in Northern Ethiopia that strives to help Ethiopian farmers produce healthy crops in even the most undesirable weather conditions that the region is subjected to.

Farms of the Future: Forget Sun and Soil, It's All About LED  For centuries, farmers have been dependent on weather, short growing seasons, fluctuating supply and demand cycles, and a host of environmental factors that make the farming business one of luck as much as agricultural acumen. 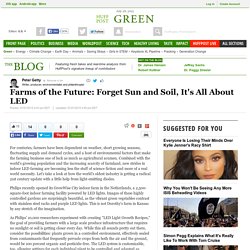 Combined with the world's growing population and the increasing scarcity of farmland, new strides in indoor LED farming are becoming less the stuff of science fiction and more of a real world necessity. Let's take a look at how the world's oldest industry is getting a radical 21st century update with a little help from light-emitting diodes. Philips recently opened its GrowWise City indoor farm in the Netherlands, a 2,500-square-foot indoor farming facility powered by LED lights. Images of these highly controlled gardens are surprisingly beautiful, as the vibrant green vegetables contrast with stainless steel racks and purple LED lights. Philips' new GrowWise indoor farm will revolutionize food production. 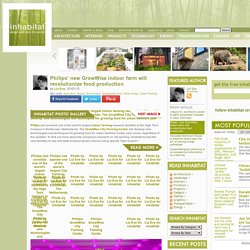 30 things you should never compost or recycle. Remember the good ol' days — back when we only had one bin for trash? 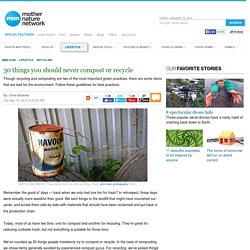 In retrospect, those days were actually more wasteful than good. We sent things to the landfill that might have nourished our yards, and buried them side-by-side with materials that should have been reclaimed and put back in the production chain. Today, most of us have two bins: one for compost and another for recycling. They're great for reducing curbside trash, but not everything is suitable for those bins. We've rounded up 30 things people mistakenly try to compost or recycle. Bread products: This includes cakes, pasta and most baked goods. Cooking oil: Smells like food to animal and insect visitors. Diseased plants: Trash them, instead. Sustainable Gardening How To - Plant Disease Prevention and Control. Have you ever happily watched your garden growing, only one day to discover some plants acting strangely, and then watched sadly as they stopped growing and died? 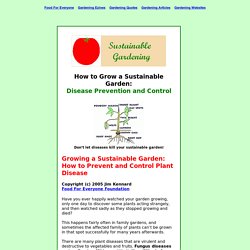 This happens fairly often in family gardens, and sometimes the affected family of plants can’t be grown in that spot successfully for many years afterwards. Sustainable Gardening How To - Composting Pros and Cons. I'm often asked what it takes to make good compost, and my first answer surprises the inquirer. 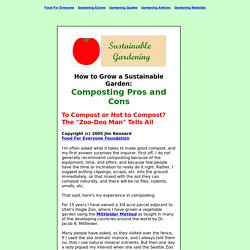 First off, I do not generally recommend composting because of the equipment, time, and effort, and because few people have the time or inclination to really do it right. Rather, I suggest putting clippings, scraps, etc. into the ground immediately, so that mixed with the soil they can compost naturally, and there will be no flies, rodents, smells, etc. That said, here's my experience in composting: For 15 years I have owned a 3/4 acre parcel adjacent to Utah's Hogle Zoo, where I have grown a vegetable garden using the Mittleider Method as taught in many of the developing countries around the world by Dr. 3 Ways to Grow a Sustainable Garden. Edit Article Three Methods:Preparing Your GardenPlanting Your GardenWatering and Maintenance A sustainable garden is one which uses a minimum of outside resources and which benefits rather than harms the surrounding ecosystem. 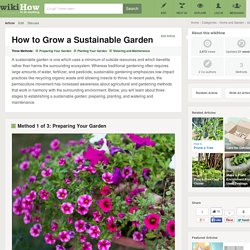 Whereas traditional gardening often requires large amounts of water, fertilizer, and pesticide, sustainable gardening emphasizes low-impact practices like recycling organic waste and allowing insects to thrive. In recent years, the permaculture movement has increased awareness about agricultural and gardening methods that work in harmony with the surrounding environment.

Composting: a guide to making compost at home, using compost tumblers, bins & other composters. ~ Activate your compost. 'Activators' can be added to your compost to help kick-start the process and speed up composting. 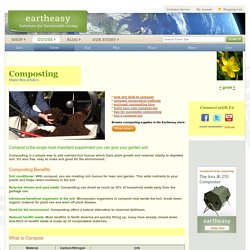 Common compost activator materials are: comfrey leaves, grass clippings, young weeds, well-rotted chicken manure. ~ Flying insects attracted to your compost? Small fruit flies, especially, are naturally attracted to the compost pile. They can be discouraged by simply covering any exposed fruit or vegetable matter. Sustainable Gardening: Composting Made Easy. Getting started with compostng is much easier than many people think. Making your own compost is one of the best things you can do for your garden. Barring the purchase of your composter or the materials to make one, the resulting fertilizer and soil amendment is 100% free. Composting is a natural biological process that converts organic material into humus-like matter that gardeners refer to as “black gold.” Sustainable Gardening Practices. “Sustainable” is a word we’re seeing everywhere lately and whether the subject is energy, logging, fishing or gardening, it generally means the ability to continue indefinitely without external inputs.

Benefits to composting for organic sustainability in natural vegetable gardens. Food growing made easier with edible perennials. It is an established ‘fact’ that growing your own food is hard work. Urban farms won’t feed us, but they just might teach us. During World War II, when the government rationed food, Americans turned their backyards and front lawns into “victory gardens” that supplied 40 percent of the nation’s fruits and vegetables. Could we do that again, or even improve on it? If we want to scale up regional food systems and stop giving farmers an incentive to expand into prairies and rainforests, it seems like it would be a great idea to grow a significant amount of our calories right in our cities. It’s a beautiful concept, reuniting humans and nature to solve many of the problems brought about by our urbanization. 10 Weird Intensive Gardening Methods That Really Work. Now This Is Natural Food.