How economic growth has become anti-life. Limitless growth is the fantasy of economists, businesses and politicians. 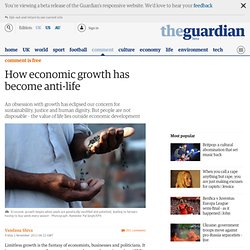 It is seen as a measure of progress. As a result, gross domestic product (GDP), which is supposed to measure the wealth of nations, has emerged as both the most powerful number and dominant concept in our times. However, economic growth hides the poverty it creates through the destruction of nature, which in turn leads to communities lacking the capacity to provide for themselves.

The concept of growth was put forward as a measure to mobilise resources during the second world war. Why the word 'sustainability' should be banned. While the idea of Corporate Social Responsibility (CSR) that became all the rage some time ago initially had worthwhile aims, it is now more commonly used by corporations to out-worthy their competitors. 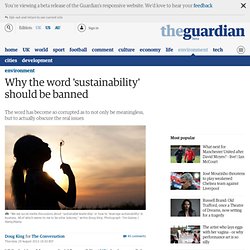 Originally CSR encouraged corporations to consider the impact of their business on society, which provides their consumers and clients, their staff, and – certainly in the case of bankers – pays for their mistakes. So when was Corporate Social Responsibility replaced with Corporate Sustainability Rhetoric? Sustainability key for growth and development. Dubai: Businesses can no longer grow by just selling products and services, they can only grow with people, economies and societies, business leaders say. 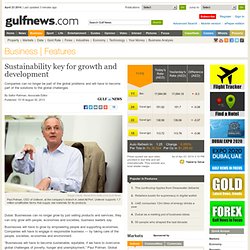 Businesses will have to grow by empowering people and supporting economies. Companies will have to engage in responsible business — by taking care of the people, societies, economies and environment. “Businesses will have to become sustainable, equitable, if we have to overcome global challenges of poverty, hunger and unemployment,” Paul Polman, Global Chief Executive Officer of Unilever who was in Dubai this week, said. GTS Mid-year Update August 2013. For immediate release Green Transition Scoreboard® Shows Dramatic Mid-year Surge August 30, 2013, St. 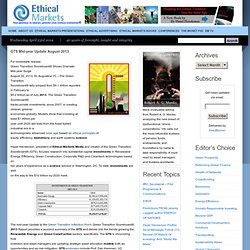 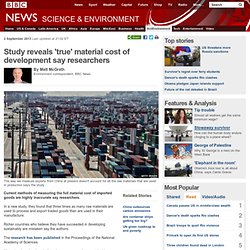 S. Korea tests 'electric road' for public buses. A South Korean city has begun testing an "electrified road" that allows electric public buses to recharge their batteries from buried cables as they travel. 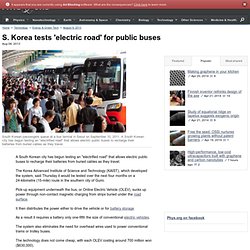 The Korea Advanced Institute of Science and Technology (KAIST), which developed the system, said Thursday it would be tested over the next four months on a 24-kilometre (15-mile) route in the southern city of Gumi. Pick-up equipment underneath the bus, or Online Electric Vehicle (OLEV), sucks up power through non-contact magnetic charging from strips buried under the road surface. It then distributes the power either to drive the vehicle or for battery storage As a result it requires a battery only one-fifth the size of conventional electric vehicles. 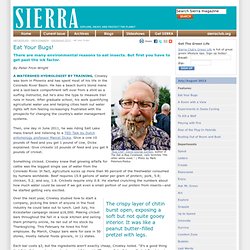 By Peter Frick-Wright A watershed hydrologist by training, Crowley was born in Phoenix and has spent most of his life in the Colorado River Basin. He has a beach bum's blond mane and a laid-back comportment left over from a stint as a surfing instructor, but he's also the type to measure trail runs in hours. After graduate school, his work quantifying agricultural water use and helping cities hash out water rights left him feeling increasingly frustrated with the prospects for changing the country's water management systems.

Global Ponzi Scheme: We're Taking $7.3 Trillion A Year In Natural Capital From Our Children Without Paying For It. Science Committee. Mark Stafford Smith - Chair Dr Mark Stafford Smith is the Science Director of CSIRO’s Climate Adaptation Flagship in Canberra, Australia, where he oversees a highly interdisciplinary programme of research on many aspects of adapting to climate change. 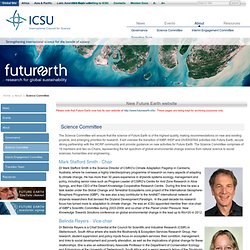 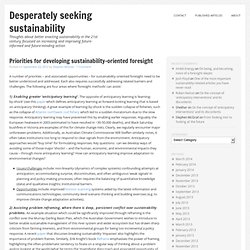 Each also requires successfully addressing related barriers and challenges. The following are four areas where ‘foresight methods’ can assist: Green & Away. Welcome to the Green & Away website. We provide inspirational and fully serviced conference facilities for organisations looking for a new kind of experience for their participants. We are currently taking bookings for our 2013 season and beyond. Sustainability Audits. Barclays, the UK megabank, has been making waves recently in the mainstream press after allegations of wrongdoing surfaced with a hefty multi-million dollar fine for manipulating Libor, a key London benchmark for setting interest rates within international financial markets.

While the full extent of alleged collusion within the financial industry remains under investigation by government regulators, the revelations to this point have already resulted in contentious legislative hearings on both sides of the Atlantic. This massive breakdown in corporate governance at Barclays in fact cost the CEO his job and exposed the cozy axis supporting the modern hierarchy of central banking. A World without Landfills? It’s Closer than You Think by Jen Soriano. Two recipients of this year’s Goldman Environmental Prize are working to abolish the practice of sending trash to landfills and incinerators. 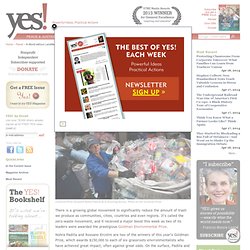 And the idea is catching on. posted Apr 17, 2013 Goldman Prize recipient Nohra Padilla at a recycling facility. Photo by the Goldman Prize. There is a growing global movement to significantly reduce the amount of trash we produce as communities, cities, countries and even regions. The Self-Hating State. None of the world’s top industries would be profitable if they paid for the natural capital they use. The notion of “externalities” has become familiar in environmental circles.

Iceland generates 100 percent of its electricity from hydroelectric and geothermal sources. Dutch clothing brand offers its jeans for rent. Gain instant and exclusive access to over 5,000 of the most creative ideas, innovations and startups on our database and use our smart filters to take you direct to those that are most relevant to your industry and your needs. 5 Lessons From The Companies Making Sustainability More Profitable Than Ever. Good news for corporate social responsibility leaders: there’s a growing body of evidence that sustainability often goes hand in hand with profits. Rainwater Harvesting during Reconstruction. Nourishing People and the Planet: Time to Act. Three important international meetings this year are likely setting sustainable agricultural development on a new course.

The links between agriculture and the environment are on the global agenda. Today, we’re writing from London, currently attending the Planet Under Pressure conference. Scientists in the global change community, focused on reducing the environmental impact of a growing global population, have come together to share their latest work in the lead up to Rio+20—the United Nations Conference on Sustainable Development happening in Rio de Janeiro this June, and commemorating the pivotal Earth Summit that took place there in 1992.

Related:  Sustainability   -  None of the world’s top industries would be profitable if they paid for the natural capital they use   -  Dutch clothing brand offers its jeans for rent   -  Education   -  Enterprise