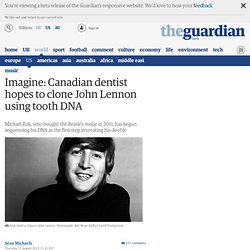 Michael Zuk, who bought Lennon's molar at a 2011 auction, has begun sequencing the former Beatle's DNA – the first step in a process set out by scientists who propose to clone a woolly mammoth. "Many Beatles fans remember where they were when they heard John Lennon was shot. I hope they also live to hear the day he was given another chance," Zuk said. The tooth has already been couriered to an unnamed US lab where scientists are "considering ways to extract [its] genetic code". "I am nervous and excited at the possibility that we will be able to fully sequence John Lennon's DNA," Zuk said.

Two years ago the Red Deer-based dentist paid £19,500 for a "discoloured molar" that had been passed down by Lennon to his Weybridge housekeeper, Dot Jarlett. Nevertheless, Zuk denies that he has bitten off more than he can chew. German researchers publish full Neanderthal genome. (Phys.org) —The Max Planck Institute for Evolutionary Anthropology, in Leipzig, Germany, hascompleted the genome sequence of a Neandertal and makes the entire sequence available to the scientific community today. 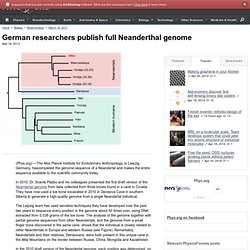 In 2010, Dr. Svante Pääbo and his colleagues presented the first draft version of the Neandertal genome from data collected from three bones found in a cave in Croatia. They have now used a toe bone excavated in 2010 in Denisova Cave in southern Siberia to generate a high-quality genome from a single Neandertal individual. The Leipzig team has used sensitive techniques they have developed over the past two years to sequence every position in the genome about 50 times over, using DNA extracted from 0.038 grams of the toe bone.

In the 2010 draft version of the Neandertal genome, each position was determined, on average, once. "The genome is of very high quality", says Dr. Explore further: More questions than answers as mystery of domestication deepens. Guest Blog, Scientific American Blog Network#.UTjahrtq80E.reddit#.UTjahrtq80E.reddit#.UTjahrtq80E.reddit. Study shows that intelligence derives from brain cells other than neurons White cell is human astrocyte with the unique long tendrils that penetrate multiple layers of grey matter (yellow arrowheads). 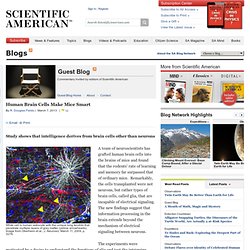 Image from Oberheim et al., J. Neurosci, March 11, 2009, p. 3276. A team of neuroscientists has grafted human brain cells into the brains of mice and found that the rodents’ rate of learning and memory far surpassed that of ordinary mice. Remarkably, the cells transplanted were not neurons, but rather types of brain cells, called glia, that are incapable of electrical signaling. The experiments were motivated by a desire to understand the functions of glia and test the intriguing possibility that non-electric brain cells could contribute to information processing, cognitive ability, and perhaps even the unparalleled cognitive ability of the human brain, which far exceeds that of any other animal.

Human glia are different Human+mouse, from the Cell Stem Cell paper. This changes everything. Woolly mammoth DNA may lead to a resurrection of the ancient beast. The pioneering scientist who created Dolly the sheep has outlined how cells plucked from frozen woolly mammoth carcasses might one day help resurrect the ancient beasts. The notional procedure – bringing with it echoes of the Jurassic Park films – was spelled out by Sir Ian Wilmut, the Edinburgh-based stem-cell scientist, whose team unveiled Dolly as the world's first cloned mammal in 1996. Though it is unlikely that a mammoth could be cloned in the same way as Dolly, more modern techniques that convert tissue cells into stem cells could potentially achieve the feat, Wilmut says in an article today for the academic journalism website, The Conversation.

"I've always been very sceptical about the whole idea, but it dawned on me that if you could clear the first hurdle of getting viable cells from mammoths, you might be able to do something useful and interesting," Wilmut told the Guardian. "I think it should be done as long as we can provide great care for the animal. Mammoth find: Preserved Ice Age giant found with flowing blood in Siberia.