Researchers build robotic bat wing. The strong, flapping flight of bats offers great possibilities for the design of small aircraft, among other applications. 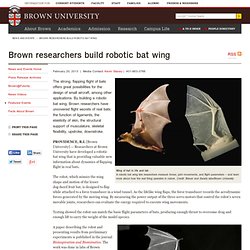 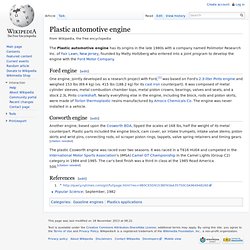 Ford engine[edit] One engine, jointly developed as a research project with Ford,[1] was based on Ford's 2.3-liter Pinto engine and weighed 153 lbs (69.4 kg) (vs. 415 lbs (188.2 kg) for its cast iron counterpart). Polyamide-imide. Polyamide-imides may be thermosetting or thermoplastic amorphous polymers that have exceptional mechanical, thermal and chemical resistant properties. 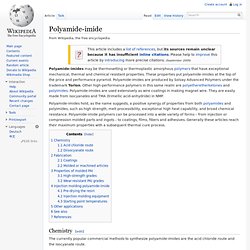 These properties put polyamide-imides at the top of the price and performance pyramid. Polyamide-imides are produced by Solvay Advanced Polymers under the trademark Torlon. Other high-performance polymers in this same realm are polyetheretherketones and polyimides. Wankel engine. The Mazda RX-8, a sports car powered by a Wankel engine Norton Classic air-cooled twin-rotor motorcycle The engine was invented by German engineer Felix Wankel. 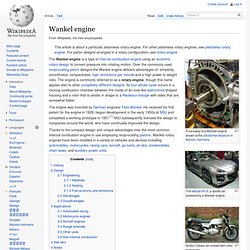 He received his first patent for the engine in 1929, began development in the early 1950s at NSU and completed a working prototype in 1957.[1] NSU subsequently licensed the design to companies around the world, who have continually improved the design. Thanks to the compact design and unique advantages over the most common internal combustion engine in use employing reciprocating pistons, Wankel rotary engines have been installed in a variety of vehicles and devices including: automobiles, motorcycles, racing cars, aircraft, go-karts, jet skis, snowmobiles, chain saws, and auxiliary power units. 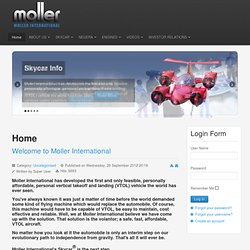 Read More Neuera Info Over the past 30+ years Moller International and its predecessor companies have been working on the development of the technologies required for a new class of vehicles called volantors. Read More Maximum power Uses our proprietary porting design and advanced component development to generate twice as much power for its weight as most four-stroke competitors. Read More What People Are Saying "A combination airplane and motorcar is coming. Moller M400 Skycar. A poster advertising the Skycar Description[edit] The M400 craft, currently under development, is purported to ultimately transport four people; single-seat up to six-seat variations are also planned.[3] It is described as a car since it is aimed at being a popular means of transport for anyone who can drive, incorporating automated flight controls, with the driver only inputting direction and speed required. 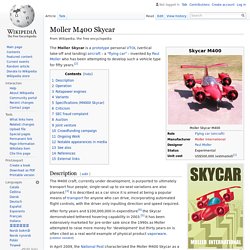 After forty years and $100,000,000 in expenditure[4] the Skycar demonstrated tethered hovering capability in 2003.[5] It has been extensively marketed for pre-order sale since the 1990s as Moller attempted to raise more money for 'development' but thirty years on is often cited as a real world example of physical product vaporware. [citation needed] Operation[edit] Rotapower engines[edit] Segway PT. Computers and motors in the base of the device keep the Segway PT upright when powered on with balancing enabled. 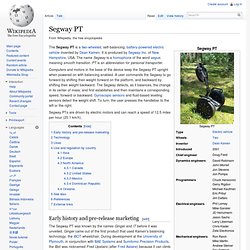 A user commands the Segway to go forward by shifting their weight forward on the platform, and backward by shifting their weight backward. The Segway detects, as it balances, the change in its center of mass, and first establishes and then maintains a corresponding speed, forward or backward. Gyroscopic sensors and fluid-based leveling sensors detect the weight shift. To turn, the user presses the handlebar to the left or the right. Segway PTs are driven by electric motors and can reach a speed of 12.5 miles per hour (20.1 km/h).

Early history and pre-release marketing[edit] This stealth company nestled against (inside?) Google is building flying cars. A sketch from one of Zee.Aero’s patent filings of a personal flying aircraft In late August a patent was published that covered a “personal aircraft.” 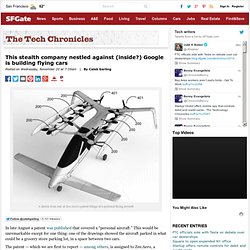 This would be unremarkable except for one thing: one of the drawings showed the aircraft parked in what could be a grocery store parking lot, in a space between two cars. The patent — which we are first to report — among others, is assigned to Zee.Aero, a stealth company in Mountain View, and the drawings show this is no ordinary personal craft. This is a flying car. There have been stabs at a Jetson-mobile before, but two designs in the Zee.Aero patent put this one on the outer cutting edge: It would be battery powered.

We are also hearing from sources that Google is involved, but in what capacity is unclear. Zee.Aero’s craft in its natural environment?