Video editing apps. I have just been playing around with a great set of apps that can really help if you are looking at video use in lessons. 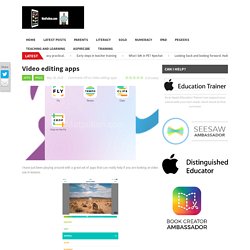 Tempo is a great app that lets you speed up and slow down your movies with a simple push of a button. No need for complicated cutting and changing settings. Just choose the length of time and the speed the video should play in that time. Great for Practical sessions where you may want to focus in on specific parts of a clip in more detail. Crop is an app aimed at user of devices that like to film in portrait mode but when they share the video to a TV they get the black bars down the side. Clips helps you quickly adjust clip length in videos, Take all the clips you want and then in the visual screen cut it down to whatever length you want simply by adjusting the bars. Video editing apps. Free Collaborative Video Creation with iPads – From Greg Kulowiec on Free Technology for Teachers. This post first appeared on Free Technology for Teachers. 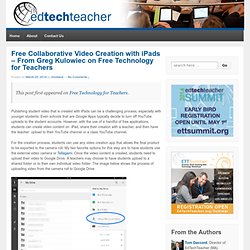 Publishing student video that is created with iPads can be a challenging process, especially with younger students. Even schools that are Google Apps typically decide to turn off YouTube uploads to the student accounts. However, with the use of a handful of free applications, students can create video content on iPad, share their creation with a teacher, and then have the teacher upload to their YouTube channel or a class YouTube channel. For the creation process, students can use any video creation app that allows the final product to be exported to the camera roll.

My two favorite options for this step are to have students use the external video camera or Tellagami. Once the content is in Google Drive, a teacher can access the student created video through the Google Drive app on their iPad. Creating a Classroom Studio with an iPad and a Green Screen.

One way to depict the cycle of education is that it moves between the development of learning and the subsequent expression of understanding ... and the amazing growth of inexpensive mobile technology tools is affording learners the ability to communicate their understanding in ever more creative and personalized manners. 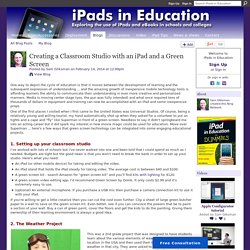 Media is moving center stage (yes, the pun was fully intended) and what once required tens of thousands of dollars in equipment and training can now be accomplished with an iPad and some inexpensive props. One of the first places I visited when I first came to the United States was Universal Studios. Of course, being a relatively young and willing tourist, my hand automatically shot up when they asked for a volunteer to put on tights and a cape and "fly" like Superman in front of a green screen. Needless to say it didn't springboard me into an acting career but it did spark my interest in how movie magic could be used for education. 1.

X 2. 3. The process: What’s New in iMovie, iPhoto and Garageband for iOS Classrooms? As you probably already heard, Apple is making both the iLife and the iWork apps free to all users who activate an iOS device after September 1, 2013. 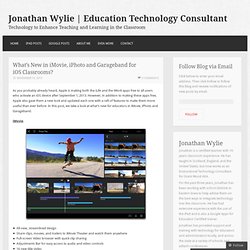 Your Perfect Solution For Sharing Student iPad Projects. There is an ever growing number of teachers and students using iPads for creation projects. 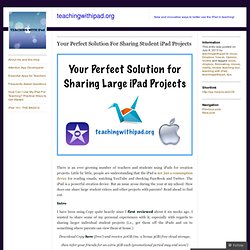 Little by little, people are understanding that the iPad is not just a consumption device for reading emails, watching YouTube and checking FaceBook and Twitter. The iPad is a powerful creation device. But an issue arose during the year at my school: How does one share large student videos and other projects with parents? Read ahead to find out. Intro I have been using Copy quite heavily since I first reviewed about it six weeks ago. Create Interactive Images With ThingLink’s New iPad App. ThingLink is one of my favorite tools that I’ve reviewed on Free Technology for Teachers. 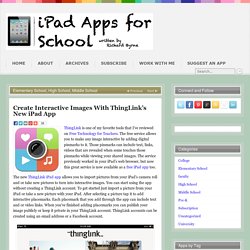 The free service allows you to make any image interactive by adding digital pinmarks to it. Those pinmarks can include text, links, videos that are revealed when some touches those pinmarks while viewing your shared images. The service previously worked in your iPad’s web browser, but now this great service is now available as a free iPad app too. The new ThingLink iPad app allows you to import pictures from your iPad’s camera roll and or take new pictures to turn into interactive images. You can start using the app without creating a ThingLink account. A few of the ways that I’ve seen ThingLink used by teachers is to have students add multimedia labels to diagrams of cells, to label geographic features, and to label historical images like that of the signing of the declaration of independence. Tags: Art, free apps, free ipad apps, history, ipad app, language arts.

Stream Videos with Free iPad Apps. You might watch Netflix, HBO Go, or Hulu Plus for personal use on your iPad, but while these may not always be appropriate for students, there are many free iPad apps for streaming video that will work great in your classroom. 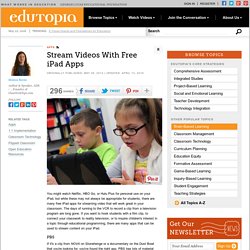 The days of running to the VCR to record a clip from a television program are long gone. Sites Offering FREE Graphics for eLearning Developers. Our eLearning Content Development team is ALWAYS looking for free stuff. 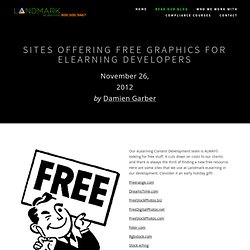 It cuts down on costs to our clients and there is always the thrill of finding a new free resource. Here are some sites that we use at Landmark eLearning in our development. Consider it an early holiday gift! Freerange.com DreamsTime.com FreeStockPhotos.biz FreeDigitalPhotos.net FreeStockPhotos.com. Making A Legendary Movie Trailer With iMovie On The iPad. Terivarnado.homewoodcityschools.wikispaces.net/file/view/iMovie+App+for+ipad.pdf. Video Lighting. Maintaining a YouTube Following. Once upon a time, in a small city in Canada there was a young boy who could really sing. 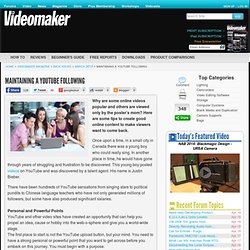 In another place in time, he would have gone through years of struggling and frustration to be discovered. This young boy posted videos on YouTube and was discovered by a talent agent. His name is Justin Bieber. There have been hundreds of YouTube sensations from singing stars to political pundits to Chinese language teachers who have not only generated millions of followers, but some have also produced significant salaries. Personal and Powerful Points. 20+ Apps to Support the Digital Storytelling Process. 8 Useful Video Apps for your iPad. 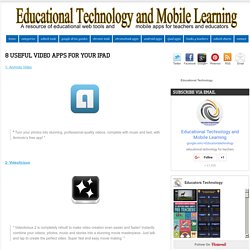 " 2- Videolicious " Videolicious 2 is completely rebuilt to make video creation even easier and faster! Instantly combine your videos, photos, music and stories into a stunning movie masterpiece. iPad: A Creative App Combo for Learning. Using iPads with students? Consider this... If you do nothing else with your iPads, may I suggest Explain Everything and iMovie (or similar apps). Let me explain... iMovie ($5.99) is the classic, intuitive editor by Apple. In the iPad form it allows for bringing together multiple video clips created on the iPad along with: Microphone input (narration, sound FX, original music recordings, etc.)Video recording (talk to your audience directly, record a skit, record anything!)

Explain Everything ($2.99) is a whiteboard app, and what I would consider the best on the market to date. 11 Amazing Augmented Reality Ads. Now You Can Upload Photos and Videos to Websites from Your iPad. This is a big deal for schools using iPads. Email has been a primary way for teachers to collect student work (which often might be an image or a video). Email can be challenging to set up in school environments, especially on shared devices. Furthermore, email has file size limits—most notably you cannot email videos longer than 50 seconds using iOS's Email app. Flip cam software reborn as iPhone app Givit. Ah, I remember the little Flip Mino, a pocket HD recorder that took the world by storm and then sank beneath the waves of competition from smartphones that could perform a similar task. The developers behind the Flip software now have a new social iPhone app to take on Viddy and SocialCam and make video editing and sharing easy.

The app, called Givit, is free at the App Store. New users get 5 GB of free online storage for their creations. You begin shooting video(s), then edit by combining multiple clips, adding motion effects, music and transitions.