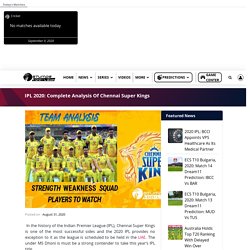 The under MS Dhoni is must be a strong contender to take this year’s IPL title. In the year 2019, the three-times champion ended runners-up after losing the final match to Mumbai Indians. This time Chennai Super Kings will definitely try its best to go one step ahead. Stumpsandbails analyzed the Chennai Super Kings in detail. Strength So far, the Chennai Super Kings never failed to reach the qualifiers level and apart from CSK, no other team has broken this record, not even Mumbai Indians, who is four-times IPL champion. Weakness. Free IPL Fantasy League Online. Posted on - August 29, 2020 This line has now become a cliché. 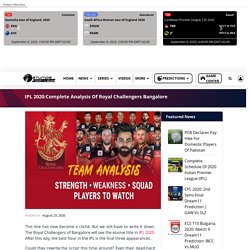 But we still have to write it down. Free IPL Fantasy League Online. Posted on - September 8, 2020 After the 1st CPL 2020 Semifinal match between Tribango Knight Riders and Jamaica Tallawahs, the 2nd semi-final match is going to be held on 9th September 2020 (Wednesday) in between Guyana Amazon Warriors (GAW) and St Lucia Zouks (SLZ) at Brian Lara Stadium, Tarouba, Trinidad. 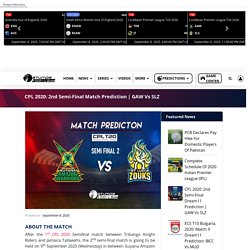 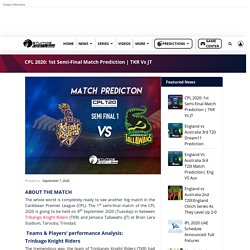 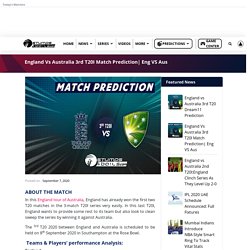 In this last T20I, England wants to provide some rest to its team but also look to clean sweep the series by winning it against Australia. The 3rd T20 2020 between England and Australia is scheduled to be held on 8th September 2020 in Southampton at the Rose Bowl. Teams & Players’ performance Analysis: England. Free IPL Fantasy League Online. Posted on - September 4, 2020 Cricket Australia announced on Friday that the sixth edition of the Women’s Big Bash League (WBBL) will be held entirely in Sydney, beginning on October 25. 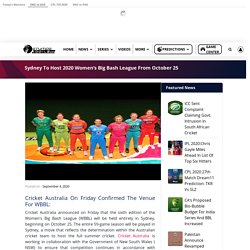 Free IPL Fantasy League Online. Posted on - September 3, 2020 At a time when the franchises of the IPL except Chennai Super Kings have started their preparations for the 13th edition of IPL, the BCCI is yet to declare the schedule of the season. 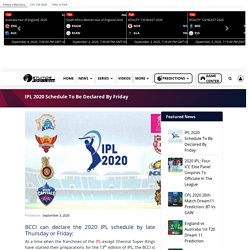 Because of the coronavirus scare in the CSK team, the BCCI has delayed declaring the 2020 IPL fixture, where 11 supporting staff and 2 players tested positive for the COVID-19. As per the sources, the schedule of this year’s edition will be declared by Thursday late evening, or by Friday. At first, the 2020 IPL was scheduled to be held on 29th March, then it was rescheduled to 15th April after which the Indian Cricket Board deferred it for an indefinite period provided the huge positive coronavirus cases in India.

Free IPL Fantasy League Online. Posted on - September 3, 2020 The 1st match of the T20I series between England and Australia is scheduled to be held on 4th September 2020 at the Rose Bowl, Southampton. 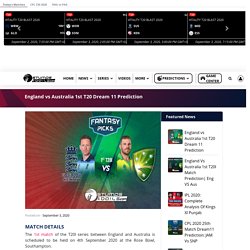 The match will start at 10:30 PM IST / 05:00 PM GMT / 06:00 PM LOCAL. After losing the last T20I match against Pakistan by just 5 runs, now team England will try its best to return in winning ways when they play against Australia. Eoin Morgan’s leading team has not lost anyone series after the outbreak of COVID-19 and they will be interested to keep that record. After the outbreak of COVID-19, this match will be the 1st international match of team Australia. On Friday evening, during the match, there is a 40% probability of raining in Southampton. At the Ageas Bowl, the surface equally benefitted to the batsmen as well as bowlers. Will be added when there’s an update. PROBABLE PLAYING XI OF England. Free IPL Fantasy League Online. Posted on - September 2, 2020 The 25th match of the Caribbean Premier League (CPL) 2020 between Jamaica Tallawahs (JAM) and St Kitts and Nevis Patriots (SNP) is scheduled to be held on 3rd September 2020, at the Brian Lara Stadium, Tarouba, Trinidad. 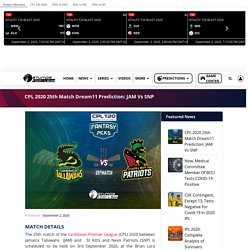 This match will start at 7:30 PM IST. The 2020 CPL hasn’t been that much kind to the Rayad Emrit-led team St Kitts and Nevis Patriots (SNP). Till now, they have won only one match out of seven and placed at the bottom of the table. On the other hand, Jamaica Tallawahs have won six matches out of seven. There is a probability of rain in Tarouba but the weather prediction improves in the second half of the day. The pitch condition is going to favor spinners but we can expect a better batting pitch now during the match. Free IPL Fantasy League Online. Posted on - September 2, 2020 On Tuesday (01-09-2020), BCCI declared CRED as an official partner for the 13th season of the Indian Premier League (IPL). 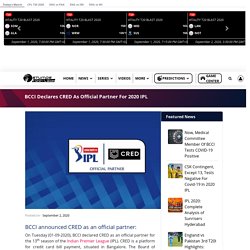 CRED is a platform for credit card bill payment, situated in Bangalore. The Board of Control for Cricket In India (BCCI) took the help of its twitter handle and posted “BCCI has declared CRED as its official partner #Dream11IPL”. Sourav Ganguly, the president of BCCI replied to the tweet and wrote “Welldone BCCI.. in this tough market condition.” The IPL chairman, Brijesh Patel said “We are very happy to announce CRED as our official partner of the IPL 2020-2022. Founder and CEO of CRED, Kunal Shah said “We are very much happy to associate with the Indian Premier League, without any question among the high-profile tournaments on the sporting calendar of the whole world.

Free IPL Fantasy League Online. Posted on - September 1, 2020 The Emirates Cricket Board (ECB) and the Board of Control for Cricket in India (BCCI) have received waivers from the government of Abu Dhabi, finding the way for the IPL schedule release. Mirror has discussed to the officials of ECB and has been informed that the Abu Dhabi government, which has seen a sudden surge in COVID cases has agreed to make an exception for the Indian Premier League, including somewhat relaxation in the 14 days of quarantine requirement period.

The schedule of IPL may come in the next couple of days if the BCCI doesn’t want to wait for any next developments in the CSK franchise. ECB Statement to Mirror: An ECB official told Mirror “We have got all required permissions for the games of IPL in Abu Dhabi, Dubai, and Sharjah. Free IPL Fantasy League Online. Posted on - September 1, 2020 The 22nd match of the Caribbean Premier League (CPL) 2020 between Guyana Amazon Warriors (GAW) and Barbados Tridents (BT) is scheduled to be held on 2nd September 2020, at the Brian Lara Stadium, Tarouba, Trinidad. This match will start at 05:30 PM Local Time (09:30 PM GMT) (03:00 AM IST) On Wednesday (02-09-2020), in the 22nd match of CPL 2020, Barbados Tridents (BT) will lock its horns against Guyana Amazon Warriors (GAW). This is the 8th match of BT and 7th match of the GAW.

So far, GAW has won 3 matches and BT has won only 2 matches. In this game, both BT and GAW will try their best for claiming a win to get higher up in the points table. Free IPL Fantasy League Online. Posted on - September 1, 2020 In the 2019 Indian Premier League, Mumbai Indians beat their toughest competitor Chennai Super Kings (CSK), and took their fourth title.

Coming into 2020 IPL, the defending champions are the most deserving team to win the trophy. In the past, Mumbai Indians have already shown their expertise and skills to handle any situation and they are all set to prove their capability in the UAE also. Stumpsandbails analyzed the team completely and find out some details. So let’s take a look at those crucial points. Free IPL Fantasy League Online. Free IPL Fantasy League Online. Posted on - August 30, 2020 The relationship, the inseparable link between England and the rain persisted in Manchester as the third consecutive match was marred by unfavorable conditions. For England, there was another unfavorable mess going around like Pakistan, for whatever time the game was played minus Tom Banton’s belligerence, the stronger side looked. The opening game for the tourists could have been better off if it wasn’t for Iftikar Ahmed ‘s mistake in the slips when Banton struggled to find his feet at a score of five, who eventually chastized the opponent with 71 off 42.

There have been plenty to speak about the good for Pakistan. Free IPL Fantasy League Online. Posted on - August 28, 2020 Cricket Australia (CA) has confined its cricketers to use sweat from the face, head, and neck to shine the ball at the time of the upcoming limited-overs matches to limit the COVID-19 transmission risk. As per the ICC rules, using saliva on the ball is banned as a health safety measures in the outbreak of COVID-19 Pandemic.

However, still, a player is allowed to use sweat from any place on the body and rub it on the ball. But Cricket Australia is taking a precautionary approach to minimize any transmission risk of the novel coronavirus. According to the health expert’s advice, the CA has asked its cricketers to not to use sweat from near nose or mouth. Free IPL Fantasy League Online. Free IPL Fantasy League Online. Posted on - August 27, 2020 After the resumption of cricket after COVID-19 lockdown, so many leagues are carried out at the same time, which has created new clashes, and cricketers have to handle the situation accordingly. For the same reason, six cricketers of Afghanistan including Rashid Khan, Mujeeb Ur Rahman, and Mohammad Nabi could miss the last week’s action of 2020 CPL. They may fly back to take part in the T20 league of Afghanistan, Shpageeza Cricket League.

From the report, it is learned that NADA will arrange five “Dope Control Stations (DCS)’ in the UAE to conduct its anti-doping tests-one DCS each at the three venues of the tournament, Dubai, Sharjah, and Abu Dhabi, and one DCS center at every dedicated training venues- Zayed Cricket Stadium situated in Abu Dhabi, and ICC Academy in Dubai. Free IPL Fantasy League Online. Posted on - August 25, 2020 Welcome to the complete updates of 3rd Test match of England vs Pakistan at Rose Bowl in Southampton: Pakistan On The Ropes, Azhar Ali Stands Tall With Unbeaten Century: Pakistani skipper Azhar Ali scored an undefeated 141, a slap in the face of his critics, but his effort could only offer a hint of respectability to the first-inning effort of the tourists.