All You Need to Know About Stormwater Runoff. Science Review: Pollution Driver Conceptual Model. In its broadest sense pollution is often thought of as the introduction of unwanted or undesirable substances or conditions into the natural environment. 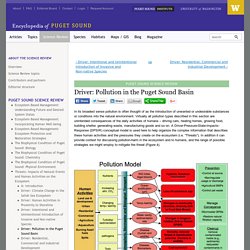 Virtually all pollution types described in this section are unintended consequences of the daily activities of humans – driving cars, heating homes, growing food, building shelter, generating waste, manufacturing goods and so on. A Driver-Pressure-State-Impacts-Response (DPSIR) conceptual model is used here to help organize the complex information that describes these human activities and the pressures they create on the ecosystem (i.e. “Threats”). In addition it can provide context for discussing pollution-harm in the ecosystem and to humans, and the range of possible strategies we might employ to mitigate the threat (Figure 4). Figure 4 Figure 4. Placeholder - Pressure: Nutrients Placeholder - Pressure: Increasing Atmospheric Carbon Dioxide Placeholder - Pressure: Changing Temperature and Salinity Figure 5 Figure 5. 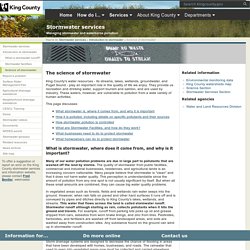 They provide us recreation and drinking water, support tourism and salmon, and are used by industry. These waters, however, are vulnerable to pollution from a wide variety of human activities. This page discusses: What is stormwater, where does it come from, and why is it important? Many of our water pollution problems are due in large part to pollutants that are washed off the land by storms.

In vegetated areas such as forests, fields and wetlands rain water seeps into the ground. Storm drains lead to lakes and streams Storm drainage systems are designed to decrease the chance of flooding in areas that have been developed with homes, businesses, and roads. The sanitary sewer system is different. Keeping pollutants out of the water isn't just a good idea - it's the law. Stormwater pollutants Oils and greases Metals Sediments Nutrients pH Drainage. 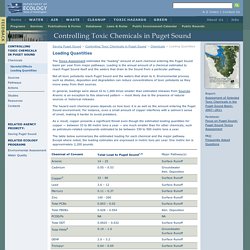 Loading is the annual amount of a chemical estimated to reach Puget Sound itself and the waters that drain to the Sound from a particular pathway. Not all toxic pollutants reach Puget Sound and the waters that drain to it. Environmental process such as dilution, deposition and degradation can reduce concentrations of toxic pollutants as they move away from their sources. In general, loadings were about 10 to 1,000 times smaller than estimated releases from Sources. 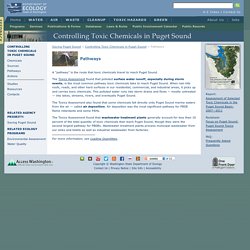 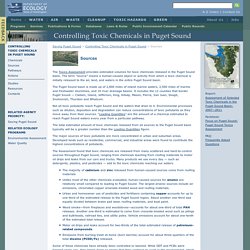 The term “source” means a human-caused object or activity from which a toxic chemical is initially released to the air, land, and waters in the entire Puget Sound basin. The Puget Sound basin is made up of 2,800 miles of inland marine waters, 2,500 miles of marine and freshwater shorelines, and 19 river drainage basins. It includes the 12 counties that border Puget Sound — Clallam, Island, Jefferson, King, Kitsap, Mason, Pierce, San Juan, Skagit, Snohomish, Thurston and Whatcom. 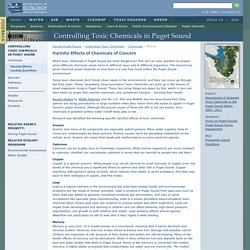 This isn’t an easy question to answer since different chemicals cause harm in different ways and to different organisms. Belly-Up Fish and Other Stormwater Mayhem. How Much Petroleum Enters Puget Sound In Stormwater? WA Approves First Copper Brake Pad Ban. Jesus-Walking Salmon and Stormwater.