Are you sure you have what it takes?

If you are sad on a Sunday afternoon because it means that the next day you have to go back to work, you probably already discovered that jobs are unnatural for humans to have. 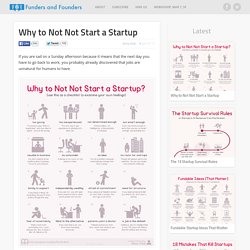 If you go back a hundred years before the mechanization era, you would see that the default way of making a living was not through a job, but through farming. So that tells us the current default for making a living is temporary. The question is what’s next? The next default could be starting startup. Just like getting a job is today. Too Young. Before the Startup. October 2014 (This essay is derived from a guest lecture in Sam Altman's startup class at Stanford. 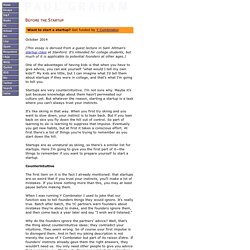 It's intended for college students, but much of it is applicable to potential founders at other ages.) One of the advantages of having kids is that when you have to give advice, you can ask yourself "what would I tell my own kids? " The Aging Entrepreneur. Can older people be great entrepreneurs? 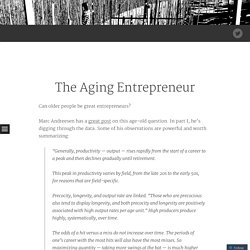 Marc Andreesen has a great post on this age-old question. In part I, he’s digging through the data. Some of his observations are powerful and worth summarizing: "Generally, productivity — output — rises rapidly from the start of a career to a peak and then declines gradually until retirement.This peak in productivity varies by field, from the late 20s to the early 50s, for reasons that are field-specific.Precocity, longevity, and output rate are linked. "Those who are precocious also tend to display longevity, and both precocity and longevity are positively associated with high output rates per age unit. " I went through an evolution of sorts on this topic. I started with a variation of the Beard Hypothesis (enthusiasm decreases with age but experience increases, and there’s an optimum cross-over point). I then moved on to Dean Simonton’s observations, beautifully covered in Marc’s article. Now I prefer a slightly different hypothesis. Marc asks:

The Entrepreneurial Age. Nivi · February 25th, 2013 The entrepreneurial age will be as important as the industrial age and the information age. 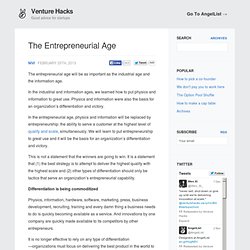 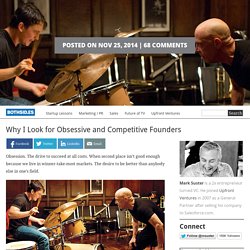 The drive to succeed at all costs. When second place isn’t good enough because we live in winner-take-most markets. The desire to be better than anybody else in one’s field. This blog started from a series of conversations I found myself having over and over again with founders and eventually decided I should just start writing them.It would often make my colleagues laugh because they’d hear me like a broken record and then the next week read my ramblings in a post. Last week’s obsession was about obsession itself. 10 days ago I saw the film, Whiplash, which is one of my favorite films of the year. The protagonist in the film, Andrew, is a drummer and the story is his experiences in his freshman year of one of the most elite music conservatories in the country. Are you a serious startup founder or just a kid thinking startups are cool? - Labs of Latvia.

What Attributes Make An Entrepreneur. Entrepreneurshit. The Blog Post on What It’s Really Like. We Need to Have Empathy for Those With Depression. It is an Illness. Somebody commented that in 2013 I have done a lot more personal posts than usual. 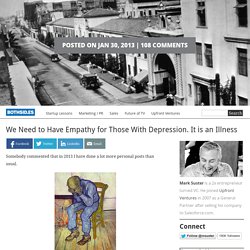 I didn’t set out that way. It just happened. Lots of tragedies in the past couple of months. The Yo-Yo Life of a Tech Entrepreneur – A Cautionary Tale. TechCrunch ran my article yesterday as a guest post but I wanted to have a copy here for anybody who missed it and for future readers of this blog. 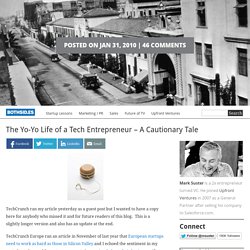 This is a slightly longer version and also has an update at the end. TechCrunch Europe ran an article in November of last year that European startups need to work as hard as those in Silicon Valley and I echoed the sentiment in my post about the need for entrepreneurs to be maniacal about their businesses if one wants to work in the hyper competitive tech world. Of course articles like these are going to inflame people because not everybody who is running their own business (or aspires to) wants to believe that you need to go all out to compete and win on a global scale.

I agree that not all businesses require this level of dedication and the lifestyle choice isn’t for everybody. But … global tech does require an absolute, singular commitment level. I started my first company in the “go-go years” of the Internet: 1999. I was now 33 years old. Startups Are NOT Glamorous – They Run on Fear.