SUCCESS! Cygnus Launches in First Mission Since Antares Rocket Explosion. A Simple Design Change Could Make a Thruster To Get Us to Mars  This is how Boeing is building the first commercial Starliner spacecraft ever. NASA Just Tested the Rocket Engine We'll Use to Visit Mars. 7 Innovative Concepts are Getting Closer to Reality Thanks to NASA. Advanced Space Transportation Program fact sheet. Advanced Space Transportation Program: Paving the Highway to Space Going to Mars, the stars and beyond requires a vision for the future and innovative technology development to take us there. 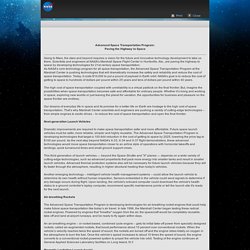 Falcon9 Reached The Barge But Did Not Survive The Landing [Updating] Here's How Close SpaceX Came To Landing A Rocket On A Barge In The Ocean. I'm now imagining space-x firing up their KSP to carry out some testing.... 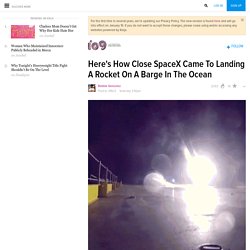 Flagged Good lord...why does your lander have SRBs? The SRBs aren't firing on landing. I'm trying to build a vehicle that can land on Eve with chutes only, then take off again and make it all the way back to Kerbin. The delta-V required is on the order of 14000 m/s. I learned a lot about what works and what doesn't. :) Spacex. Orion Soars on First Flight Test. Here's What To Expect During The First Orion Test Flight. Everything You Need To Know About NASA's Next Deep Space Mission. Z-2 Spacesuit Design Vote.

We are NASA Glenn engineers who work on Ion Propulsion. Ask Us Anything! : IAmA. Faster Spaceships. Billionaire Peter Thiel funds Positron Dynamics who are developing a 10 microgram per week antimatter factory. Billionaire Peter Thiel is famous for his early investment in Facebook.He also was a cofounder of Paypal which was then merged with Xcom which was started by Elon Musk. 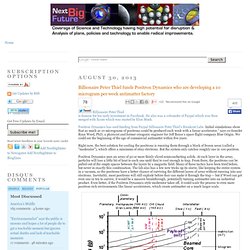 Positron Dynamics has seed funding from Paypal billionaire Peter Thiel’s Breakout Labs. Initial simulations show that as much as 10 micrograms of positrons could be produced each week with a linear accelerator," says co-founder Ryan Weed, PhD, a physicist and former cryogenic engineer for Jeff Bezos’s space flight company Blue Origin. We could see the beginning of the age of commercial antimatter within five years. Right now, the best solution for cooling the positrons is running them through a block of frozen neon (called a "moderator"), which offers a minimum of stray electrons. But the system only catches roughly one in 100 positron. Positron Dynamics uses an array of 50 or more thinly sliced semiconducting solids.

Positron Dynamics has an outdated website with information from 2011. Virgin Galactic says it's on track to begin tours of space in 2014. NASAs Next-Gen Orion Capsule Arrives at Kennedy Space Center. NASA's next-generation Orion spacecraft arrived at the Kennedy Space Center in Florida on Monday, where an initial test flight of the four-person, long-range crew module is being planned for 2014.

Orion, NASA's first manned spacecraft since the U.S. space agency retired its space shuttle fleet last summer, is designed to ferry astronauts far beyond low-Earth orbit—to nearby asteroids or possibly even on an interplanetary journey to Mars. The spacecraft's arrival at the Kennedy Space Center was heralded with a ceremony attended by NASA officials and Sen. Bill Nelson of Florida, according to science and technology site The Bunsen Burner. 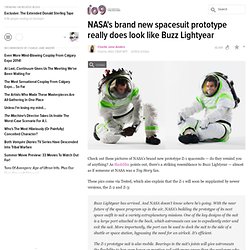 They should just color code them like the Moon Zero Two spacesuits or Lego men. At least that way we can tell who's firing pew-pew lasers at whom when the inevitable lunar turf wars break out. Or maybe they were the best choice? I bet that the color scheme is to make it resemble Toy Story by design. These images are publicity shots, and the Toy Story movies are so popular. Actually, it makes total sense from for visibility. Mars trip to use astronaut poo as radiation shield - space - 01 March 2013. The man and woman aboard the Inspiration Mars mission set to fly-by the Red Planet in 2018 will face cramped conditions, muscle atrophy and potential boredom. 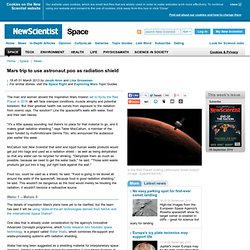 But their greatest health risk comes from exposure to the radiation from cosmic rays. The solution? Line the spacecraft's walls with water, food and their own faeces. "It's a little queasy sounding, but there's no place for that material to go, and it makes great radiation shielding," says Taber MacCallum, a member of the team funded by multimillionaire Dennis Tito, who announced the audacious plan earlier this week. McCallum told New Scientist that solid and liquid human waste products would get put into bags and used as a radiation shield – as well as being dehydrated so that any water can be recycled for drinking. Food too, could be used as a shield, he said. Everything We Know About Dennis Tito's 2018 Human Mission to Mars. Boeing X-37. The Boeing X-37, also known as the X-37 Orbital Test Vehicle (OTV), is an American reusable unmanned spacecraft. 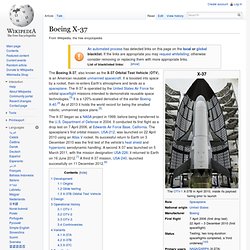 It is boosted into space by a rocket, then re-enters Earth's atmosphere and lands as a spaceplane. The X-37 is operated by the United States Air Force for orbital spaceflight missions intended to demonstrate reusable space technologies.[3] It is a 120%-scaled derivative of the earlier Boeing X-40.[4] As of 2013[update] it holds the world record for being the smallest robotic, unmanned space plane.[5] The X-37 began as a NASA project in 1999, before being transferred to the U.S. Department of Defense in 2004. It conducted its first flight as a drop test on 7 April 2006, at Edwards Air Force Base, California. Development[edit] Origins[edit] In 1999, NASA selected Boeing Integrated Defense Systems to design and develop an orbital vehicle, built by the California branch of Boeing's Phantom Works. 1999 artist's rendering of the X-37 spacecraft. Glide testing[edit]