A New Study Challenges Assumptions About the Origins of Earth's Water. These Tiny Antennas Will Help Map Big Bang's Afterglow  Yep, the Force of Gravity is the Same Throughout the Universe. Why is the Solar System Flat? Drzowie comments on IF sound could travel through space, how loud would The Sun be? Astrophysics. Physical Cosmology. Birth of the Universe detected by scientists. Astronomers are announcing today that they have acquired the first direct evidence that gravitational waves rippled through our infant universe during an explosive period of growth called inflation. 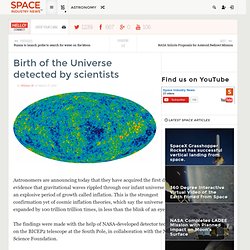 This is the strongest confirmation yet of cosmic inflation theories, which say the universe expanded by 100 trillion trillion times, in less than the blink of an eye. The findings were made with the help of NASA-developed detector technology on the BICEP2 telescope at the South Pole, in collaboration with the National Science Foundation. “Operating the latest detectors in ground-based and balloon-borne experiments allows us to mature these technologies for space missions and, in the process, make discoveries about the universe,” said Paul Hertz, NASA’s Astrophysics Division director in Washington. Our universe burst into existence in an event known as the Big Bang 13.8 billion years ago. Moments later, space itself ripped apart, expanding exponentially in an episode known as inflation. 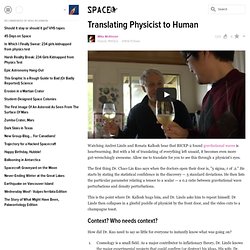 Sigma ratios (multiples) are easily defined for normally (generalized Gaussian) distributed data, but for other distributions it can be far more complex or even intractable if they are non-parametric. But there is a really great set of limits in the Tchebysheff Inequality ( that show minima and maxima in terms of statistical assurance/coverage for data from ANY distribution. Sorry, not trying to be a jerk, but if people are really interested in the details of what that phrase means, its true, detailed context really means everything. 7 sigma (one-sided) for some distributions is less than the equivalent of 3 sigma (one-sided) for a normal distribution (as you have illustrated in the article). Lying with statistics is so easy! Scientists Detect Direct Evidence of Big Bang’s Gravitational Waves.

Gravitational Waves: A Black Hole’s Fury - From Quarks to Quasars. Jacques Cousteau once said, “What is a scientist after all? 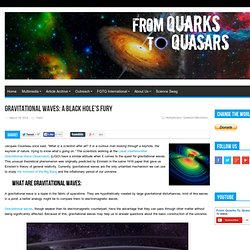 It is a curious man looking through a keyhole, the keyhole of nature, trying to know what’s going on.” The scientists working at the Laser Interferometer Gravitational-Wave Observatory (LIGO) have a similar attitude when it comes to the quest for gravitational waves. This unusual theoretical phenomenon was originally predicted by Einstein in the same 1916 paper that gave us Einstein’s theory of general relativity. How do we measure gravitational waves? No Edge: The Shape of the Universe. (Part 1: Flat Models) No Edge 2: The Curvature of the Universe. Why "Critical Density" Could Determine the Fate of the Universe. Unprecedented neutrino discovery is a "Nobel Prize in the making" Uh, I'm probably not the right one to answer this, but I'll try. 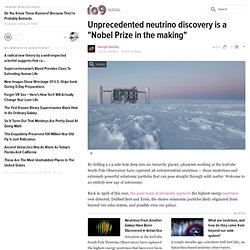 You should most likely check out the related article though. Or better, this thread by casen and look at Corpore Metals reply. Yes, they were found moving through the earth, or at least can. That's the reason they dig so deep, in order to avoid interference by other stuff, both man-made and natural. Neutrinoes are detected by having them pass through and interact with dense oil, royal gases, or heavy water, as far as I've read, producing a release of photons that get picked up by large arrays of photodetectors.

HI Ronny, Neutrinos are so small that they can pass right through your body or the Earth or whatever, without actually touching anything, like electrons, protons etc. That helps a lot. Wow, thanks! Timeline Photos. Has The First Dark Matter Particle Been Found? The existence of dark matter has been known for decades, but working out what it is actually made from has been a frustrating quest. 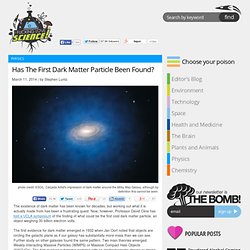 Now, however, Professor David Cline has told a UCLA symposium of the finding of what could be the first cold dark matter particle, an object weighing 30 billion electron volts. The first evidence for dark matter emerged in 1932 when Jan Oort noted that objects are circling the galactic plane as if our galaxy has substantially more mass than we can see. Further study on other galaxies found the same pattern. Astronomers directly image a filament of the “cosmic web” for the first time. Astronomers have long predicted that a “web” exists that is primarily composed of dark matter and could give clues about the overall structure of the Universe. 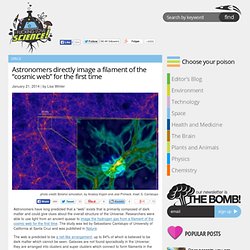 Researchers were able to use light from an ancient quasar to image the hydrogen gas from a filament of the cosmic web for the first time. The study was led by Sebastiano Cantalupo of University of California at Santa Cruz and was published in Nature. The web is predicted to be a net-like arrangement, up to 84% of which is believed to be dark matter which cannot be seen. Our first glimpse of the dusty remnants of an exploding star. Did a hyper-black hole spawn the Universe?

Ask A Physicist: Why Believe In Dark Matter? So far in the comments, I keep seeing the same note- which works out roughly to "oh, you mean they REALLY can't see it? 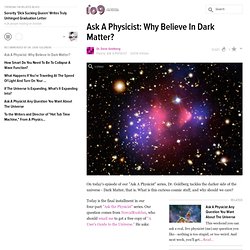 Oh, well then it must be a conceptual kludge or fudge factor, because that doesn't make sense. " So I'll be a little more emphatic. Ultracold big bang experiment successfully simulates evolution of early universe. Physicists have reproduced a pattern resembling the cosmic microwave background radiation in a laboratory simulation of the big bang, using ultracold cesium atoms in a vacuum chamber at the University of Chicago. 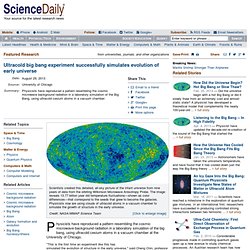