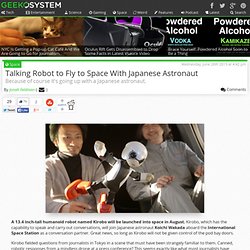 Kirobo, which has the capability to speak and carry out conversations, will join Japanese astronaut Koichi Wakada aboard the International Space Station as a conversation partner. Great news, so long as Kirobo will not be given control of the pod bay doors. Kirobo fielded questions from journalists in Tokyo in a scene that must have been strangely familiar to them. Canned, robotic responses from a mindless drone at a press conference? This seems exactly like what most journalists have experienced previously. According to its website, the Kibo Robot Project‘s goal is to “help solve the problems brought about by a society that has become more individualized and less communicative,” by giving people robots to talk to. 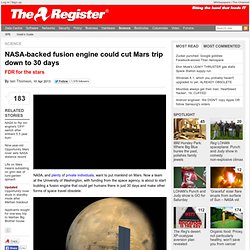 Now a team at the University of Washington, with funding from the space agency, is about to start building a fusion engine that could get humans there in just 30 days and make other forms of space travel obsolete. Rocket fuel is just so last century "Using existing rocket fuels, it's nearly impossible for humans to explore much beyond Earth," said lead researcher John Slough, a UW research associate professor of aeronautics and astronautics in a statement. NASA Snaps the First 360-degree Image of the Sun - Technology News by ExtremeTech. A little more than four years ago, NASA launched a twin pair of spacecraft as part of their STEREO (Solar TErrestrial RElations Observatory) mission. 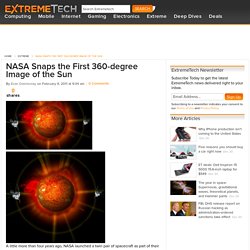 The crafts traveled in opposite directions along the Earth’s orbit en route to positions on opposite sides of the sun. This past Sunday the two crafts reached their respective destinations and—for the first time—captured a 360-degree view of our local celestial heavy. The space agency is now being fed a steady stream of images of the sun from opposite sides that they are able to combine into 3D models. The STEREO probes are specifically tuned to four wavelengths of extreme ultraviolet radiation which can be used to trace key aspects of solar activity such as solar flares, tsunamis, and magnetic filaments.

“With data like these, we can fly around the sun to see what’s happening over the horizon—without ever leaving our desks,” comments STEREO program scientist Lika Guhathakurta from NASA headquarters. NASA and DARPA Want a "100-Year Starship," As Long as They Don't Have to Build It. Since its inception (okay, since the early 1960s) the United States has been the world leader in space travel and exploration, taking the lead in crafting mankind's vision and agenda for humanity's role in space. 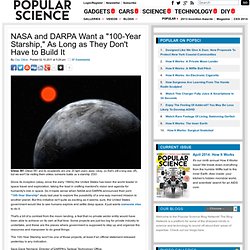 So it made sense when NASA and DARPA announced their joint "100-Year Starship" study last year to explore the possibility of a one-way manned mission to another planet. But this initiative isn't quite as exciting as it seems; sure, the United States government would like to see humans explore and settle deep space. It just wants someone else to do it. That's a bit of a contrast from the moon landing, a feat that no private sector entity would have been able to achieve on its own at that time. Some projects are just too big for private industry to undertake, and these are the places where government is supposed to step up and organize the resources and manpower to do great things. An 'Ion Funnel' Could Help Future Mars Missions Identify Signs of Alien Life.

The Mars Curiosity Rover NASA/JPL-Caltech Tapping a bit of frat-boy ingenuity, researchers at NASA’s Jet Propulsion Lab (JPL) have devised a new way for an old space exploration instrument to suck down large volumes of vaporized particles and analyze rocks for their compositions using an ion funnel, a process that could speed analysis, lighten instrument loads, and improve the odds of finding signs of life. Mass spectrometry is an old space standby--the Mars Science Laboratory, launching in November, will host spectrometry instruments as part of its science suite--used largely to identify the composition of soil and rock on the Martian surface. NASA Now Ready to Detect World-threatening Solar "Storm of the Century" The Earth's magentic field serves a shield against solar radiation. 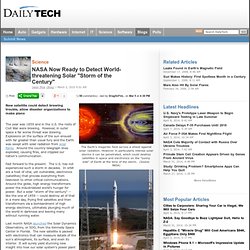 However in particularly intense solar storms it can be penetrated, which could destroy satellites in space and electronics on the "sunny side" of Earth at the time of the storm. (Source: NASA) The Solar Dynamics Observatory launches in Florida. (Source: NASA) The SDO will allow researchers to detect a "space Katrina" event and prepare the Earth for its impact. New satellite could detect brewing trouble, allow disaster organizations to make plans The year was 1859 and in the U.S. the roots of Civil War were brewing. NASA - Methane engine test fire. NASA Engineers Propose Combining a Rail Gun and a Scramjet to Fire Spacecraft Into Orbit.

In April, President Obama urged NASA to come up with, among other things, a less expensive method than conventional rocketry for launching spacecraft. 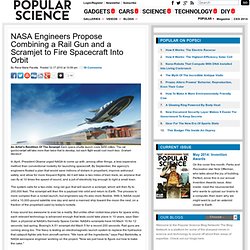 By September, the agency's engineers floated a plan that would save millions of dollars in propellant, improve astronaut safety, and allow for more frequent flights. All it will take is two miles of train track, an airplane that can fly at 10 times the speed of sound, and a jolt of electricity big enough to light a small town. The system calls for a two-mile- long rail gun that will launch a scramjet, which will then fly to 200,000 feet.

The scramjet will then fire a payload into orbit and return to Earth. The process is more complex than a rocket launch, but engineers say it's also more flexible. It may sound too awesome to ever be a reality. Rev Up The Rail Gun. Giant Slingshot: New Way to Space? EU-Backed 'Electric Sail' Could Be the Fastest Man-Made Device Ever Built. IKAROS would do well to watch its back, for the Japanese solar-sailing spacecraft may just have some competition that's fast enough to catch up. The EU is funding a three-year project at the Finnish Meteorological Institute to build the fastest man-made device in the universe: an electric sail, or ESAIL, that researchers say could make Pluto in just five years' time. Like the more well-known solar sail, the ESAIL is propelled by solar radiation and therefore requires no chemical or ion propellant.