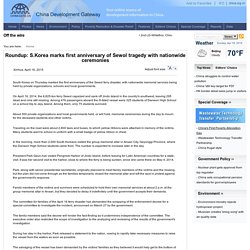 On April 16, 2014, the 6,825-ton ferry Sewol capsized and sank off Jindo Island in the country's southwest, leaving 295 dead and nine still missing. Among 476 passengers aboard the ill-fated vessel were 325 students of Danwon High School on a school trip to Jeju Island. Among them, only 75 students survived. About 300 private organizations and local governments held, or will hold, memorial ceremonies during the day to mourn for the deceased students and other victims.

Traveling on the road were about 2,800 taxis and buses, to which yellow ribbons were attached in memory of the victims. In the morning, more than 2,000 South Koreans visited the group memorial altar in Ansan City, Geyonggi Province, where the Danwon High School students came from. Families mark anniversary of Sewol ferry disaster.

"It is still hard for me to understand what our beautiful children did wrong and why we should let them go. 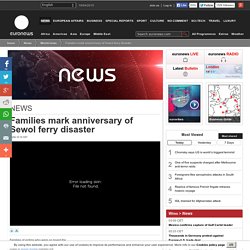 " Families of victims who were on board the Sewol ferry that sank one year ago off the coast of South Korea marked the anniversary by visiting the spot where it capsized. A yellow buoy floating in the sea with the word “Sewol” written on it in Korean is the only reminder of the disaster in the vast expanse of sea. Some 304 of their loved ones died on board. 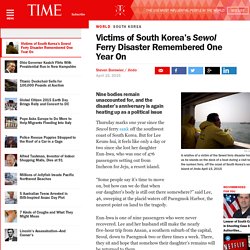 But for Lee Keum-hui, it feels like only a day or two since she lost her daughter Eun-hwa, who was one of 476 passengers setting out from Incheon for Jeju, a resort island. “Some people say it’s time to move on, but how can we do that when our daughter’s body is still out there somewhere?” The Failure of the South Korean National Security State: The Sewol Tragedy in the Age of Neoliberalism 韓国国防国家体制の破綻 セウォル号の悲劇、新自由主義時代の産物. The Asia-Pacific Journal, Vol. 12, Issue 40, No. 1, October 6, 2014. 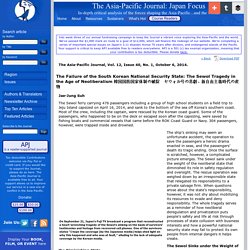 The Failure of the South Korean National Security State: The Sewol Tragedy in the Age of Neoliberalism 韓国国防国家体制の破綻 セウォル号の悲劇、新自由主義時代の産物 Jae-Jung Suh The Sewol ferry carrying 476 passengers including a group of high school students on a field trip to Jeju Island capsized on April 16, 2014, and sank to the bottom of the sea off Korea’s southern coast. Most of the crew, including the captain, were rescued by the Korean coast guard. Some of the passengers, who happened to be on the deck or escaped soon after the capsizing, were saved by fishing boats and commercial vessels that came before the ROK Coast Guard or Navy. 304 passengers, however, were trapped inside and drowned. The ship’s sinking may seem an unfortunate accident, the operation to save the passengers a heroic drama enacted in seas, and the passengers’ death its tragic ending. Search Results. SEWOL TRUTH – News. Ask a Korean!: The Sewol Tragedy: Part I - The Accident. [Series Index] To be completely honest, I really did not want to write this post. 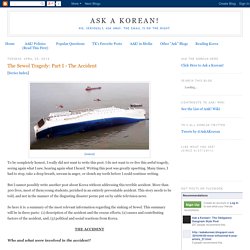 I do not want to re-live this awful tragedy, seeing again what I saw, hearing again what I heard. Writing this post was greatly upsetting. Many times, I had to stop, take a deep breath, scream in anger, or clench my teeth before I could continue writing. But I cannot possibly write another post about Korea without addressing this terrible accident. More than 300 lives, most of them young students, perished in an entirely preventable accident. Ask a Korean!: The Sewol Tragedy: Part II - Causes and Contributing Factors. [Series Index] [NOTE: I finished writing the first draft of this post on April 30, 2014. 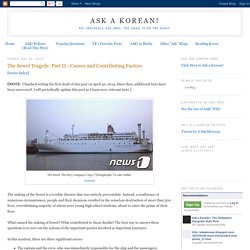 Since then, additional facts have been uncovered. I will periodically update this post as I learn new, relevant facts.] Ask a Korean!: The Sewol Tragedy: Part III - The Fallout. But as horrific as it was, the Newtown shooting was over within an hour. 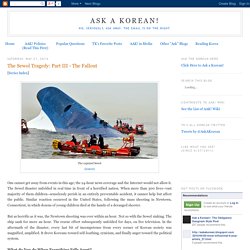 Not so with the Sewol sinking. The ship sank for more an hour. The rescue effort subsequently unfolded for days, on live television. In the aftermath of the disaster, every last bit of incompetence from every corner of Korean society was magnified, amplified. It drove Koreans toward self-loathing, cynicism, and finally anger toward the political system. The saying goes: failure is an orphan, but success has a million parents. First, the media. Stop Blaming South Korea's Culture for Last Week's Ferry Disaster. Photo of the Sewol via of Wikicommons Six days. 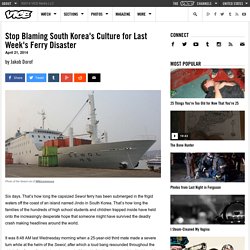 South Korea Inside Out: The Sewol Ferry Disaster: Why we Must Question some Aspects of Korean Culture. In the aftermath of great tragedies, one must be thorough in drawing conclusions about the causes and the way people respond in times of trouble and be careful not to explain away matters on handy scapegoats. 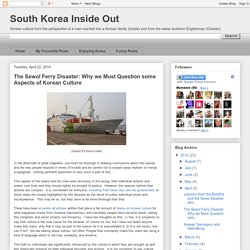 Asking pertinent questions is very much a part of this. The captain of the Sewol and his crew were obviously in the wrong, their individual actions and orders cost lives and they should rightly be brought to justice. However, the reasons behind their actions are complex. It is convenient for everyone, including Park Geun Hye and her government, to brush away the issues highlighted by this disaster as the result of solely individual errors and incompetence.

This may be so, but they have to be more thorough than that. There have been a variety of articles written that place a fair amount of blame on Korean culture for what happened (many from Koreans themselves), and inevitably people have become upset, calling this simplistic and racist (mostly non-Koreans). 10원 Tips: The eeriness of the Sewol ferry's name (세월) South Korea ferry: students reveal horror of Sewol disaster. The captain of the South Korean ferry that capsized in April has escaped the death penalty and has instead been sentenced to 36 years in jail for his role in the tragedy. 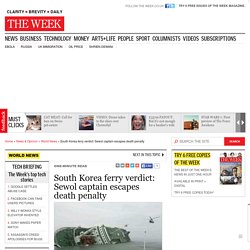 Lee Joon-seok was acquitted of murder but found guilty of gross negligence for abandoning passengers onboard the overloaded Sewol ferry. More than 300 people died in what was one of South Korea’s worst maritime disasters. The vast majority of the victims were school children. Captain Lee and several of his crew members fled the ship after it capsized and were among the first to be rescued by the coast guard. They were accused of causing hundreds of unnecessary deaths by failing to issue evacuation orders and telling the children to stay in their cabins.

Some families are still waiting to recover bodies from Sewol fer. (CNN) – It's been nearly six months since the tragic sinking of South Korea's Sewol ferry. Nearly 300 lives were lost beneath the waves of the Yellow Sea. Many of them were high school students who were on a field trip. Some families still endure an agonizing wait for the bodies of their loved ones to be recovered.

The ferry sank on April 16. According to officials, it was overloaded with cargo, much of which was not tied down properly and that contributed to the sinking. Despite South Korea’s sinking Sewol, ferries are still safer than air travel. A ferry carrying 470 passengers off the coast of South Korea is slowly sinking, having capsized early this morning.

Accounts from the scene are grim, with four dead, 55 injured and around 280 people still missing (reports on exact numbers vary). Though what caused the ship—called the Sewol—to capsize is unclear, the boat began listing violently after what those onboard reported as a loud “thumping sound” (paywall) at around 9am. Many of the travelers were high school students on a school trip to Jeju island, where the ship was headed: A blitz of lifeboats and helicopters to the sinking ship have helped rescue 180 of the 462 passengers. But those missing are assumed to be stuck in the now submerged Sewol, in the freezing darkness. Korea Focus - September 2014 - The Korea Foundation. Ferry Disaster News - Korea Real Time. Reuters With South Korea gradually getting back to normal after April’s ferry sinking and as searchers continue to look for missing bodies, the government says it will allow school excursions to resume, but with strengthened safety measures.

Sculpture on Gwanak Campus to Commemorate Sewol Ferry Disaster. After the Sewol disaster: the future of South Korea. Back to the square. Now the protesters have brought out several long pieces of paper with printed outlines of hundreds of happy people, mainly children. Supervised children are colouring them in. The colours bring the child-outlines to life. Anger, anguish six months after South Korea ferry disaster. SEOUL: "Sewol ferry recovery update No. 377 ... Days since last body found -- 88. " Six months after South Korea's worst maritime disaster, the official e-mails keep coming - sometimes several a day - recording every detail of a largely forgotten and ignored operation.

Weather and sea conditions permitting, they detail the latest mission by divers to penetrate the sunken vessel in the search for 10 bodies that remain unaccounted for. Divers grapple with inhuman conditions as Sewol ferry salvage continues. Ferry Transcript Shows Confusion And Panic: 'Please Come Quickly' A relative waits for word of missing passengers of a sunken ferry in Jindo, South Korea. Humans of Seoul - "I hope everyone on the Sewol ferry gets back... Solidarity for Sewol Ferry Tragedy. Bipartisan team discusses draft bill for Sewol victims. A trilateral task force is likely to be nearing a deal over a bill that will provide financial aid to the victims of a deadly ferry accident in April that killed 304, officials said Tuesday.

Parliament to begin discussions on compensation for ferry victims. Ferry Disaster That United South Korea Now Polarizes It - NYTimes.com. In Ferry Deaths, a South Korean Tycoon’s Downfall. Photo. JYP tried to sell agency. Singer-songwriter Park Jin-young allegedly pushed for the sale of JYP Entertainment in a reported bid to avert an investigation into the allegation that his company was illicitly funded by the Salvation Sect.