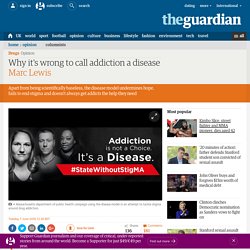 Most people think so. The idea has become entrenched in our news media, our treatment facilities, our courts and in the hearts and minds of addicts themselves. It’s a potent concept: if you’re an alcoholic or a drug addict, then you’re ill. And you’re going to remain ill. According to Nora Volkow, head of the National Institute on Drug Abuse, “addiction is a chronic, relapsing brain disease,” and that definition has been adopted by medical researchers and policy makers everywhere. Two huge benefits of the disease concept are frequently touted by Volkow and others. Recently, the supremacy of the disease model was highlighted by an article in the New England Journal of Medicine.

There is good reason to ask whether addiction actually is a disease. Funny Compilation. Vegas Receptionist All Twacked Out. DON'T DO DRUGS,HIS TRIPPING HARD OF MOLLY PILL,PCP, Fresh air interview. ‘Club Drug’ Ketamine Provides Hope in Fight Against Depression. LSD's impact on the brain revealed in groundbreaking images. The profound impact of LSD on the brain has been laid bare by the first modern scans of people high on the drug. 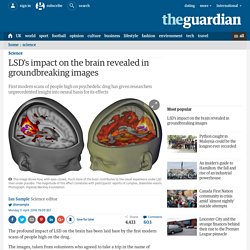 The images, taken from volunteers who agreed to take a trip in the name of science, have given researchers an unprecedented insight into the neural basis for effects produced by one of the most powerful drugs ever created. A dose of the psychedelic substance – injected rather than dropped – unleashed a wave of changes that altered activity and connectivity across the brain. This has led scientists to new theories of visual hallucinations and the sense of oneness with the universe some users report. The brain scans revealed that trippers experienced images through information drawn from many parts of their brains, and not just the visual cortex at the back of the head that normally processes visual information.

Under the drug, regions once segregated spoke to one another. The study could pave the way for LSD or related chemicals to be used to treat psychiatric disorders. Deathsexmoney030216_heroin_pod. America's opioid addiction: 'I ended up selling all my valuable stuff to buy pills' On the outskirts of Kingsport, Tennessee, Kim, a therapist, faces a small group of people sitting in folding chairs. 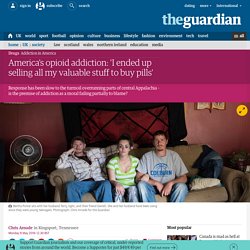 She’s helping them rid their life of illegal drugs. The attendees are all white and working class, self-described “dirt poor”, and none with college degrees. They have come to spend hours talking of past and present pains, offer each other support, and pee in a cup. Jezebel. El Chapo Speaks. Sean Penn & El Chapo: ‘Cartel’ Author Don Winslow Says It’s Not Journalism. Bestselling novelist Don Winslow has written two epics about the Drug War: 2005’s The Power of The Dog and The Cartel, the latter of which was one of the best reviewed novels of 2015 and sold to Fox for a film that will be directed by Ridley Scott. 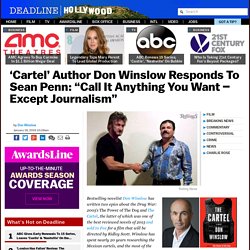 Winslow has spent nearly 20 years researching the Mexican cartels, and the most of the violence in The Cartel is based on real events. He dedicated the book to the more than 100 journalists killed in cartel violence, and named every slain reporter in his intro. He agreed to write for Deadline why he was so appalled by Sean Penn’s El Chapo encounter and subsequent 60 Minutes interview. “My article failed.” So Sean Penn tells Charlie Rose. Sean Penn & El Chapo: ‘Cartel’ Author Don Winslow Says It’s Not Journalism. Sean Penn's El Chapo interview 'horribly misguided' says Cartel author. Author Don Winslow has spoken out about Sean Penn’s infamous interview with drugs baron Joaquín Guzmán, calling it “horribly misguided”. 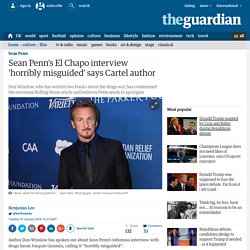 Winslow, who has written two books on the drugs war, penned a piece for Deadline, in which he described his disappointment with the Rolling Stone article that has been the centre of controversy. Penn’s secret meeting with Guzmán, also known as El Chapo, has been criticised, as the notorious drug trafficker was one of the most wanted men in the world.

Guzmán was captured as the piece was published three months later. Sean Penn on El Chapo interview: 'I have a terrible regret' Sean Penn has spoken out for the first time about his infamous interview with drug lord Joaquín “El Chapo” Guzmán, claiming he had “failed”. 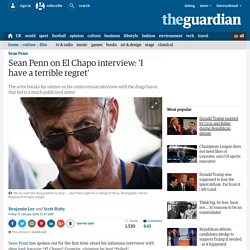 The actor expressed regret that his exclusive Rolling Stone interview with Guzmán had not achieved its true purpose – to start a conversation about the war on drugs. The conversation that ensued ended up being mostly about the wisdom of the decision to let Guzmán, the most powerful drug trafficker in the world with the blood of thousands on his hands, have final approval over the profile before it was published.

Penn had met with the drug cartel kingpin for a Rolling Stone interview last October, and, on the same day the article was printed earlier this month, Guzmán was swiftly arrested. Lift the Ban! Kofi Annan on Why It's Time To Legalize Drugs. In my experience, good public policy is best shaped by the dispassionate analysis of what in practice has worked, or not. 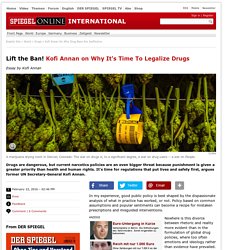 Policy based on common assumptions and popular sentiments can become a recipe for mistaken prescriptions and misguided interventions. Harvey Milk - Give them hope. Harvey Implores. Harvey Milk. Harvey Milk (22 May 1930 – 27 November 1978) was an American politician and gay rights activist, and the first openly gay city supervisor of San Francisco, California. 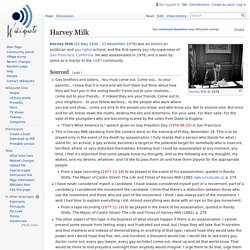 He was assassinated in 1978, and is seen by some as a martyr to the LGBT community. Sourced[edit] Gay brothers and sisters,...You must come out. The Hope Speech : Harvey Milk. Harvey Milk delivered a message in 1978 that is just as relevant today. 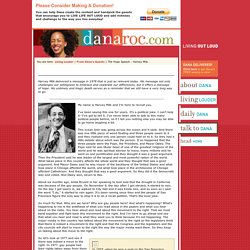 His message not only challenges our willingness to embrace and celebrate our differences, but it offers a message of hope. His untimely and tragic death serves as a reminder that we still have a very long way to go. My name is Harvey Milk and I'm here to recruit you. I've been saying this one for years. Sonntag bring dance, aerial, and theatre to Open Space - Creative Eastleigh. After a week in residence, Sonntag Productions took part in the second Open Space of the New Year on 22nd January. 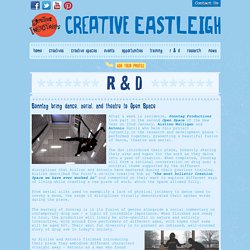 Aislinn Mulligan and Antonio Harris who helm this project – currently in the research and development phase – performed together, presenting a beautiful fusion of dance, theatre and aerial. The duo introduced their piece, honestly sharing their aims and hopes for the work as they delve into a year of creation. When completed, Sonntag will form a rational conversation on drug use; a societal theme supported by the different disciplines that Aislinn and Antonio have mastered during their previous training. Aislinn described The Point’s on-site creative hub as “the most holistic Creation Space we have ever worked in” and commented on their want to explore different ways of living while creating a new piece of work, which the Space allowed fully. Heroin dealers could face murder charges amid crisis in New Hampshire.

After working an early morning shift at a nearby hotel and an afternoon spent barbecuing with her family, Jaimie Cahill fell asleep on a couch in the basement, waiting for her laundry to dry. It was 9pm, 14 June 2015. Her younger brother, Joseph Cahill, 27, was supposed to come home soon. He hadn’t said where he was going, and she was starting to get worried.

When Addiction Has a White Face. Photo WHEN crack hit America in the mid-1980s, for African-Americans, to borrow from Ta-Nehisi Coates, civilization fell. Crack embodied instant and fatal addiction; we saw endless images of thin, ravaged bodies, always black, as though from a famined land. 20 works of street art that make you say: how did they even think of this? Street art is becoming more and more popular and the artists are becoming more creative. Instead of pointless vandalizing, impressive works that can really captivate you are becoming the new trend. These 20 works are really exceptional because they establish a connection with their environment. It’s incredible that they even thought of such innovative connections. Imgur Imgur. Más Arte más Acción. Más Arte Más Acción genera proyectos artísticos interdisciplinarios con artistas y escritores que cuestionan temas sociales y de medio ambiente y que a menudo involucran procesos con comunidades menos favorecidas.

Renovated Folkestone Harbour Arm opening launches with party weekend. It will be a party atmosphere again in Folkestone as the much anticipated renovated harbour arm opens its gates this weekend. The new pier has been part of a £3.5 million refurbishment over the past year. Fentanyl: drug 50 times more potent than heroin ravages New Hampshire. Government backs wider access to experimental drugs. The government has thrown its weight behind a private member’s bill to encourage GPs and hospital doctors to try experimental medicines. The life sciences minister George Freeman is supporting the bill on medical innovation, which was put forward by Chris Heaton-Harris and is being debated in the House of Commons on Friday. The bill, which has some cross-party support, would allow doctors to search a database for drugs that are in trials or are licensed for a different use.

PMA & PMMA - Drug Prevention & Alcohol Facts. The Superman pill deaths are the result of our illogical drugs policy. 'Ice' gains in popularity despite overall methamphetamine use staying stable. Methamphetamine use has remained stable in Australia since 2001, but there has been a significant shift in use from the powdered form of the drug, known as “speed”, to crystal methamphetamine, a more potent crystallised form known as “ice”. Is ecstasy really that dangerous? All your questions answered. The recent tragic deaths of two young people after taking ecstasy at the Stereosonic music events in Sydney and Adelaide prompted much media comment.

In east Buffalo, drug addiction's grip is tightened by decades-long cycle. Swiss Vote to Keep Program Giving Addicts Heroin. A Chicago neighborhood's endless battle to stop open air drug markets. Chris had not taken heroin for 34 days but was taking nothing for granted as he sat with his baby at a treatment center, waiting for a ride to court. Just outside the center, drug dealers flooded the streets of Chicago’s west side, ready to sell heroin to anybody with $50.

Government estimates show that reported heroin use almost doubled in the US between 2007 and 2013, but here in Garfield Park, addiction has been a part of daily life for decades. Theresa May’s futile war on psychoactive drugs. Legal highs law could hinder police, says commissioner.