Kenya's tech visionaries lead the way. Microwork. The growing trend for "microwork" means the phone in your pocket could earn you extra cash one tiny job at a time. 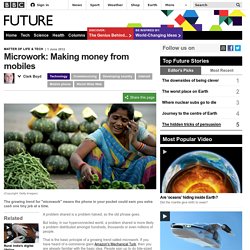 A problem shared is a problem halved, so the old phrase goes. But today, in our hyperconnected world, a problem shared is more likely a problem distributed amongst hundreds, thousands or even millions of people. Connecting to Work: How ICTs Are Expanding Job Opportunities Worldwide. When Gopal Maharjan, a young engineering graduate in Nepal, started looking for a job in Kathmandu he did not get a great response. 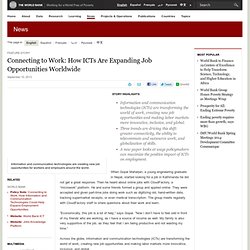 Then he heard about online jobs with CloudFactory, a “microwork” platform. He and some friends formed a group and applied online. The Microwork Solution. Idea in Brief “Impact sourcing” is a promising new way to promote economic progress in developing regions. 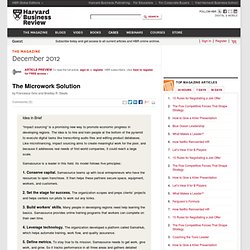 The idea is to hire and train people at the bottom of the pyramid to execute digital tasks like transcribing audio files and editing product databases. Like microfinancing, impact sourcing aims to create meaningful work for the poor, and because it addresses real needs of first-world companies, it could reach a large scale. Meet the Microworkers. A new breed of online worker is paid by the task When Julia Lee first heard of Tongal, she thought it was a scam. 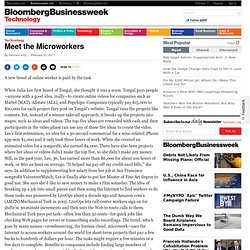 Tongal pays people—anyone with a good idea, really—to create online videos for companies such as Mattel (MAT), Allstate (ALL), and Popchips. Companies typically pay $15,000 to $20,000 for each project they post on Tongal's website. Tongal runs the projects like contests. Yet, instead of a winner-take-all approach, it breaks up the projects into stages, such as ideas and videos. Human Intelligence Tasks. Amazon Mechanical Turk. Gold Farming. Usually our discussions of ICT and economic growth follow a familiar narrative: how can we use ICTs to more efficiently perform economic tasks? 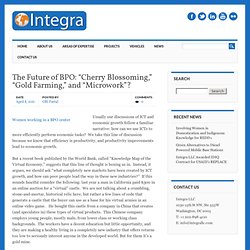 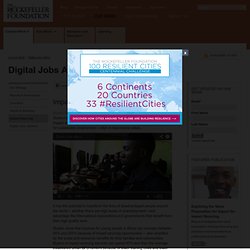 Impact sourcing intentionally employs people who have limited opportunity for sustainable employment—often in low-income areas. It has the potential to transform the lives of disadvantaged people around the world— whether there are high levels of unemployment—and advantage the international corporations and governments that benefit from their high quality work.

Studies show that incomes for young people in Africa can increase between 40% and 200% because of impact sourcing opportunities— also amplified by the social and economic benefits for their families and communities. Buyers of impact sourcing services can spend 40% less than the average established urban BPO centers because of lower training costs and lower attrition. Indonesia Mobile News Rural Communities. Knight International Journalism Fellow Harry Surjadi describes his project to develop a mobile phone network that will allow indigenous people of Indonesia to send and receive news reports. 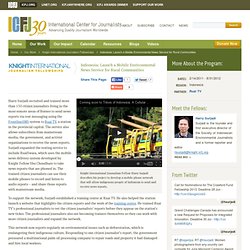 Harry Surjadi recruited and trained more than 150 citizen journalists living in the most-remote areas of Borneo to send news reports via text messaging using the FrontlineSMS system to Ruai TV, a station in the provincial capital. The service also allows subscribers from mainstream media, the government, and activist organizations to receive the news reports. Mobile Internet 2018. 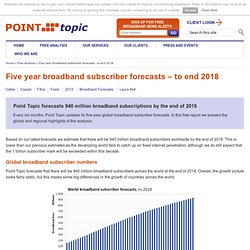 In this free report we present the global and regional highlights of the analysis. Based on our latest forecasts we estimate that there will be 940 million broadband subscribers worldwide by the end of 2018. This is lower than our previous estimates as the developing world fails to catch up on fixed internet penetration, although we do still expect that the 1 billion subscriber mark will be exceeded within this decade. Global broadband subscriber numbers. China Full Coverage 2020. The “Broadband China” initiative also hopes to attract investors in the domestic IT sector. 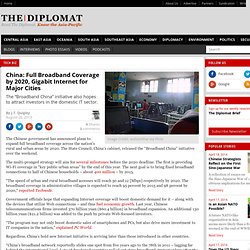 The Chinese government has announced plans to expand full broadband coverage across the nation’s rural and urban areas by 2020. The State Council, China’s cabinet, released the “Broadband China” initiative over the weekend. Broadband on the rise Asia. Broadband is an increasingly important resource for people around the world. 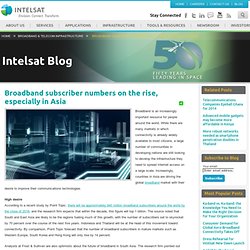 While there are many markets in which connectivity is already widely available to most citizens, a large number of communities in developing nations are still looking to develop the infrastructure they need to spread Internet access on a large scale. Increasingly, countries in Asia are driving the global broadband market with their desire to improve their communications technologies.

This is according to the United Nations’ Broadband Commission for Digital Development’s State of Broadband Report (PDF link). Asia is a mobile region ‘Mobile broadband’ subscriptions, which allow users to access the web via smartphones, tablets and WiFi-connected laptops, are growing at a rate of 30 percent per year. By the end of 2013, mobile broadband connections will be more than triple the number of conventional fixed-line broadband subscriptions. While this is a global report, the Asian market is a huge contributor to this growth. In fact, a number of developed countries in Asia are actually leading mobile penetration worldwide. Tiny Cell-Phone Transmitter. Worldwide, at least a billion people don’t have access to cellular communications because they lack electricity to run traditional transmitters and receivers. ICT for Poverty Reduction. Information Could Increase Farmer Efficiency. Building Digital Opportunities.