Edward Snowden To Join Daniel Ellsberg, Others on Freedom of the Press Foundation’s Board of Directors. Snowden Calls Russian-Spy Story 'Absurd' in Exclusive Interview. Edward J. 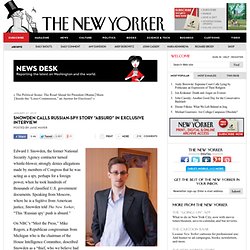 Snowden, the former National Security Agency contractor turned whistle-blower, strongly denies allegations made by members of Congress that he was acting as a spy, perhaps for a foreign power, when he took hundreds of thousands of classified U.S. government documents. Speaking from Moscow, where he is a fugitive from American justice, Snowden told The New Yorker, “This ‘Russian spy’ push is absurd.”

On NBC’s “Meet the Press,” Mike Rogers, a Republican congressman from Michigan who is the chairman of the House Intelligence Committee, described Snowden as a “thief, who we believe had some help.” The show’s host, David Gregory, interjected, “You think the Russians helped Ed Snowden?” Rogers replied that he believed it was neither “coincidence” nor “a gee-whiz luck event that he ended up in Moscow under the handling of the F.S.B.”

If he were a Russian spy, Snowden asked, “Why Hong Kong?” An aide to Feinstein, meanwhile, stressed that she did no more than ask questions. N.S.A. Devises Radio Pathway Into Computers. Photo WASHINGTON — The National Security Agency has implanted software in nearly 100,000 computers around the world that allows the United States to conduct surveillance on those machines and can also create a digital highway for launching cyberattacks. 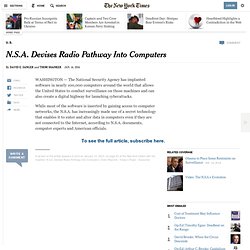 While most of the software is inserted by gaining access to computer networks, the N.S.A. has increasingly made use of a secret technology that enables it to enter and alter data in computers even if they are not connected to the Internet, according to N.S.A. documents, computer experts and American officials. The technology, which the agency has used since at least 2008, relies on a covert channel of radio waves that can be transmitted from tiny circuit boards and USB cards inserted surreptitiously into the computers. In some cases, they are sent to a briefcase-size relay station that intelligence agencies can set up miles away from the target.

Continue reading the main story Transmission distance of up to eight miles 1. 2. 3. 4. The NSA Uses Powerful Toolbox in Effort to Spy on Global Networks. In January 2010, numerous homeowners in San Antonio, Texas, stood baffled in front of their closed garage doors. 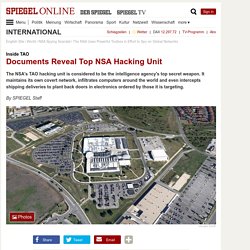 They wanted to drive to work or head off to do their grocery shopping, but their garage door openers had gone dead, leaving them stranded. No matter how many times they pressed the buttons, the doors didn't budge. The problem primarily affected residents in the western part of the city, around Military Drive and the interstate highway known as Loop 410. In the United States, a country of cars and commuters, the mysterious garage door problem quickly became an issue for local politicians. Ultimately, the municipal government solved the riddle. It was thanks to the garage door opener episode that Texans learned just how far the NSA's work had encroached upon their daily lives. On-Call Digital Plumbers According to internal NSA documents viewed by SPIEGEL, these on-call digital plumbers are involved in many sensitive operations conducted by American intelligence agencies. Inside TAO: Targeting Mexico.

Mexico's Secretariat of Public Security, which was folded into the new National Security Commission at the beginning of 2013, was responsible at the time for the country's police, counterterrorism, prison system and border police. 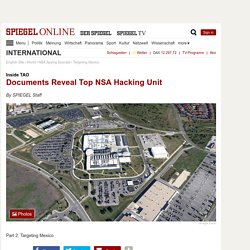 Most of the agency's nearly 20,000 employees worked at its headquarters on Avenida Constituyentes, an important traffic artery in Mexico City. A large share of the Mexican security authorities under the auspices of the Secretariat are supervised from the offices there, making Avenida Constituyentes a one-stop shop for anyone seeking to learn more about the country's security apparatus. Operation WHITETAMALE. Inside TAO: The NSA's Shadow Network. The insert method and other variants of QUANTUM are closely linked to a shadow network operated by the NSA alongside the Internet, with its own, well-hidden infrastructure comprised of "covert" routers and servers. 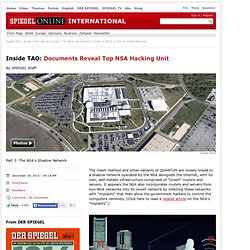 It appears the NSA also incorporates routers and servers from non-NSA networks into its covert network by infecting these networks with "implants" that then allow the government hackers to control the computers remotely. (Click here to read a related article on the NSA's "implants".) In this way, the intelligence service seeks to identify and track its targets based on their digital footprints.