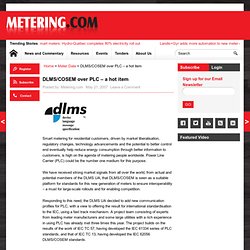 Power Line Carrier (PLC) could be the number one medium for this purpose. We have received strong market signals from all over the world, from actual and potential members of the DLMS UA, that DLMS/COSEM is seen as a suitable platform for standards for this new generation of meters to ensure interoperability – a must for large-scale rollouts and for enabling competition.

Responding to this need, the DLMS UA decided to add new communication profiles for PLC, with a view to offering the result for international standardisation to the IEC, using a fast track mechanism. The IEC 61334 series specifies a number of lower layer PLC profiles, covering the physical and MAC layers of the OSI model. DLMS COSEM ANSI C Source Code Library, DLMS Enable Your Meters Quickly with the Leader in DLMS COSEM Libraries with Certified Stack. Kalkitech provides an easy upgrade path for Meter OEMs to implement DLMS/ COSEM protocol in their existing/ new meters by providing a DLMS Server Source Code/ Object Library (ANSI C). 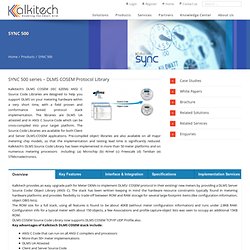 The stack has been written keeping in mind the hardware resource constraints typically found in metering hardware platforms and provides flexibility to trade-off between ROM and RAM storage for several large-footprint items (like configuration information, object OBIS lists). The ROM size for a full stack, using all features is found to be about 40KB (without meter configuration information) and runs under 2.8KB RAM. Configuration info for a typical meter with about 150 objects, a few Associations and profile capture-object lists was seen to occupy an additional 15KB ROM. DLMS/COSEM components. Connection-oriented protocol. Connection-oriented (CO-mode[1]) communication is a network communication mode in telecommunications and computer networking, where a communication session or a semi-permanent connection is established before any useful data can be transferred, and where a stream of data is delivered in the same order as it was sent. 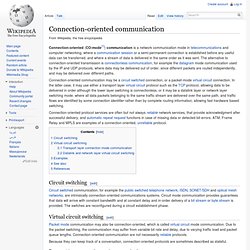 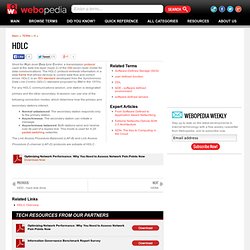 The HDLC protocol embeds information in a data frame that allows devices to control data flow and correct errors. HDLC is an ISOstandard developed from the Synchronous Data Link Control (SDLC) standard proposed by IBM in the 1970's. For any HDLC communications session, one station is designated primary and the other secondary. A session can use one of the following connection modes, which determine how the primary and secondary stations interact. What is HDLC. Abstract Syntax Notation One. Abstract Syntax Notation One (ASN.1) is a standard and notation that describes rules and structures for representing, encoding, transmitting, and decoding data in telecommunications and computer networking. 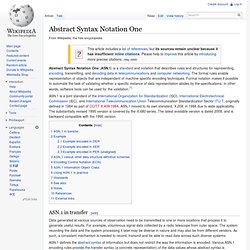 The formal rules enable representation of objects that are independent of machine-specific encoding techniques. Formal notation makes it possible to automate the task of validating whether a specific instance of data representation abides by the specifications. In other words, software tools can be used for the validation.[1] ASN.1 is a joint standard of the International Organization for Standardization (ISO), International Electrotechnical Commission (IEC), and International Telecommunication Union Telecommunication Standardization Sector ITU-T, originally defined in 1984 as part of CCITT X.409:1984. ASN.1 moved to its own standard, X.208, in 1988 due to wide applicability. ASN.1 in transfer[edit] The standard ASN.1 encoding rules include: Example[edit] Example encoded in DER[edit] List of standard OBIS codes and COSEM objects. Documents listing standard COSEM objects These documents contain the list of standard COSEM objects. 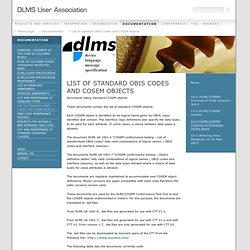 Each COSEM object is identified by its logical name given by OBIS, class identifier and version. The interface class definitions also specify the data types to be used for each attribute. In some cases, a choice between data types is allowed. 09-3 DLMS/COSEM for smart metering. DLMS/COSEM for smart metering The DLMS/COSEM standard suite (IEC 62056 / EN 13757-1) is the most widely accepted international standard for utility meter data exchange. 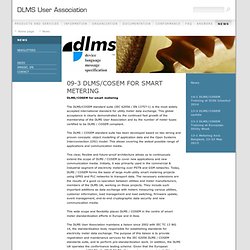 This global acceptance is clearly demonstrated by the continued fast growth of the membership of the DLMS User Association and by the number of meter types certified to be DLMS / COSEM compliant. The DLMS / COSEM standard suite has been developed based on two strong and proven concepts: object modelling of application data and the Open Systems Interconnection (OSI) model. This allows covering the widest possible range of applications and communication media. This clear, flexible and future-proof architecture allows us to continuously extend the scope of DLMS / COSEM to cover new applications and new communication media. Documentation. How is DLMS/COSEM different from other standards. How is DLMS/COSEM different from other standards for meter data exchange? 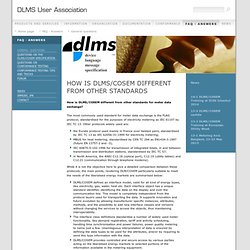 The most commonly used standard for meter data exchange is the FLAG protocol, standardised for the purposes of electricity metering as IEC 61107 by IEC TC 13. Other protocols widely used are: the Euridis protocol used mainly in France over twisted pairs, standardised by IEC TC 13 as IEC 62056-31:1999 for electricity metering; MBUS for heat metering, standardised by CEN TC 294 as EN1434-3:1997 (future EN 13757-2 and -3), IEC 60870-5-102:1996 for transmission of integrated totals, in and between transmission and distribution stations, standardised by IEC TC 57; in North America, the ANSI C12.18 (optical port), C12.19 (utility tables) and C12.21 (communication through telephone modems). While it is not the objective here to give a detailed comparison between these protocols, the main points, rendering DLM/COSEM particularly suitable to meet the needs of the liberalised energy markets are summarised below: