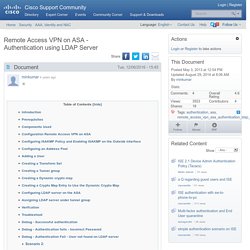 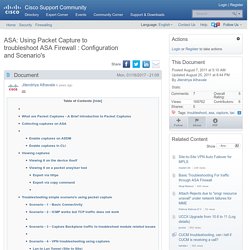 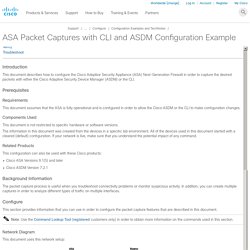 Prerequisites Requirements This document assumes that the ASA is fully operational and is configured in order to allow the Cisco ASDM or the CLI to make configuration changes. Components Used This document is not restricted to specific hardware or software versions. The information in this document was created from the devices in a specific lab environment. Related Products. IOS NAT Load-Balancing with Optimized Edge Routing for Two Internet Connections. Introduction This document describes a configuration for a Cisco IOS® router to connect a network to the Internet with Network Address Translation through two ISP connections. 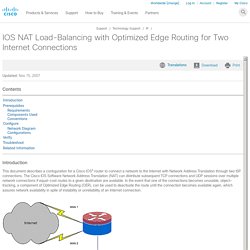 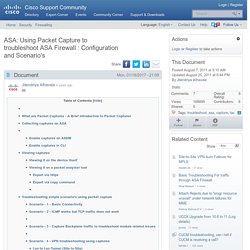 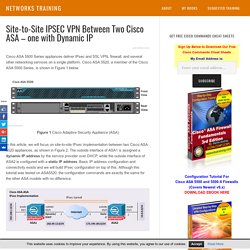 Basic ASA NAT Configuration: Webserver in the DMZ in ASA Version 8.3 and later. Introduction This document provides a simple and straightforward example of how to configure Network Address Translation (NAT) and Access Control Lists (ACLs) on an ASA Firewall in order to allow outbound as well as inbound connectivity. 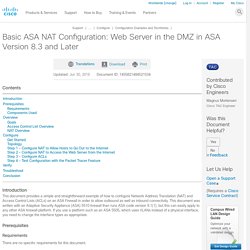 This document was written with an Adaptive Security Appliance (ASA) 5510 firewall than runs ASA code version 9.1(1), but this can easily apply to any other ASA firewall platform. If you use a platform such as an ASA 5505, which uses VLANs instead of a physical interface, you need to change the interface types as appropriate. Prerequisites Requirements There are no specific requirements for this document. Components Used. Full-Tunnel AnyConnect SSL VPN – The CLI Geek. In this article, I’d like to show you my simple way to configure the full tunnel SSL VPN through the CLI (command-line interface). 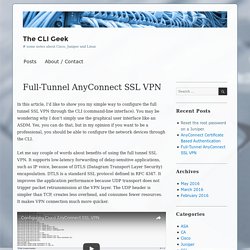 You may be wondering why I don’t simply use the graphical user interface like an ASDM. Yes, you can do that, but in my opinion if you want to be a professional, you should be able to configure the network devices through the CLI. KB0000753 - Cisco ASA 5500 Allowing Tracert. KB ID 0000753 Dtd 23/01/13 Problem I'd always assumed that as Tracert uses ICMP, and that simply adding ICMP inspection on the ASA would let Tracert commands work. 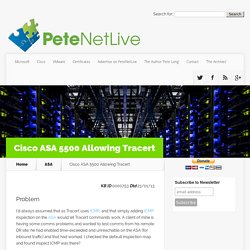 A client of mine is having some comms problems and wanted to test comms from his remote DR site, he had enabled time-exceeded and unreachable on the ASA (for inbound traffic) and that had worked. I checked the default inspection map and found inspect ICMP was there? As it turns out Tracert does NOT NEED ICMP inspection, though there are a few tweaks you need to do to make it run correctly. Solution. KB0000772 - Cisco Firewall (ASA/PIX) - Granting Access to an FTP Server. KB ID 0000772 Dtd 23/08/13 Problem If you have an FTP server, simply allowing the FTP traffic to it wont work. 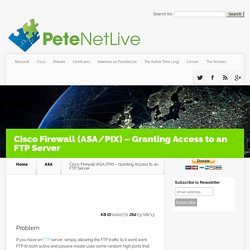 FTP (in both active and passive mode) uses some random high ports that would normally be blocked on the firewall. So by actively inspecting FTP the firewall will know what ports to open and close. Solution How you 'allow' access to the FTP server will depend on weather you have a public IP address spare or not, if you only have one public IP you will need to 'port forward' the FTP traffic to the server. Configuring Policy-Based Routing (PBR) with IP SLA Tracking - Auto Redirecting Traffic. What is Policy-Based Routing? Policy-Based Routing (PBR) is a very popular feature in Cisco routers, it allows the creation of policies that can selectively alter the path that packets take within the network.

Policy-Based Routing can be used to mark packets so that certain types of traffic are prioritized over the rest, sent to a different destination or exist via a different physical interface on the router. Classification of interesting traffic is performed using Access-Control Lists (ACLs). These can be standard, extended or named access lists as we know them. Once the interesting traffic is ‘matched’ with the use of ACLs, the router will perform the configured ‘set’ function which is defined by the Administrator. Route policy based. Cisco ASA 5500 Series Configuration Guide using the CLI, 8.2 - Adding an Extended Access List [Cisco ASA 5500-X Series Firewalls] Adding an Extended Access List This chapter describes how to configure extended access lists (also known as access control lists), and it includes the following topics: Information About Extended Access Lists Licensing Requirements for Extended Access Lists Guidelines and Limitations Default Settings.

Cisco IOS Quality of Service Solutions Configuration Guide, Release 12.2 - Configuring Policy-Based Routing [Cisco IOS Software Releases 12.2 Mainline] Configuring Policy-Based Routing. Cisco ASA 9.4.1 PBR Configuration - Problutions.com. Finally we have PBR on Cisco ASA’s!! I normally don’t need this feature but we have a few clients with multiple connections and this now means I can do all the traffic control from an ASA without the needing to use a Cisco ISR. This is straight forward to do in ASDM but I will explain how to do on CLI as its not very complicated and far quicker. I am assuming you have two working internet connections already connected to the Cisco ASA. I have my normal default route set to Priority 1 and the 2nd connection set to 2.

Prerequisites Requirements There are no specific requirements for this document. KB0000391 - Cisco ASA - Changing VPN IP Addresses. KB ID 0000391 Dtd 07/02/11 Problem I had a client the other week with about 25 sites, his core site was changing ISP and therefore changing its IP address. On the main site this is pretty straightforward, just change the outside interfaces IP address, sub net mask and the default route (That's the default gateway for non cisco-ites). All well and good, but what about his other 24 sites? They all had VPN's back to the main site, and all these VPN's were "hairpinned" together for "spoke to spoke" communication. ASA Threat Detection Functionality and Configuration.

Introduction. ASA L2L VPN Spoke to Spoke Communication - PacketU. It seems like some of the more challenging things to do on an ASA involve some sort of traffic being redirected out the same interface it was received on. This article addresses the requirement for spoke to hub to spoke communication for LAN to LAN VPNs.

Islandearth - IslandEarth - Cisco ASA setting up port forwarding using ASDM - Minecraft example. To setup port forwarding on a Cisco ASA (5505 or 5506 on my systems but is applicable to any PIX type Cisco firewall) you need to setup a NAT translation rule and Access rules. I mainly use ASDM for making changes as opposed to the command line. See Cisco ASA 5506 (and 5505, 5510) Basic Setup for details on setting up access. The example given here is for port forwarding to a Minecraft server on the internal network at IP address 192.168.0.7 but is applicable to any device you want to make available on the internet. Setting up the NAT rule: Goto Configuration, Firewall, NAT Rules. On the right hand side you should see a list of Network Objects - adding a network object is the easiest way to add a port forwarding NAT rule.

Enter the name of the network object - this can be anything you like but should be descriptive of the type of server and service. ASA Version 9.x SSH and Telnet on the Inside and Outside Interfaces Configuration Example. Config Example: Static PAT (NAT) for a range of ports using ASA version 8.3. Recently the user Sami had a question about using the ASA to translate different ranges of ports from one external global ip to different internal (local) IP addresses. He was migrating the configuration to the ASA from another vendor. Here is his question: Hi, I am in the process of replacing all of our checkpoint firewalls with Cisco ASA's. I am curently running into the following problem with configuring static NATs and PATs. At some of our locations, the external IP's are mapped to internal IP's based on port ranges, and I can't find a way to replicate that on the ASA. External NAT External Port Internal Host I could find any way of configuring a static NAT that using the port range (50000-65500), and i'm not about to write 15000 static NAT statements.