Toolstation. Smart contact lenses for health and head-up displays - tech - 10 January 2011. Lenses that monitor eye health are on the way, and in-eye 3D image displays are being developed too – welcome to the world of augmented vision THE next time you gaze deep into someone's eyes, you might be shocked at what you see: tiny circuits ringing their irises, their pupils dancing with pinpricks of light. 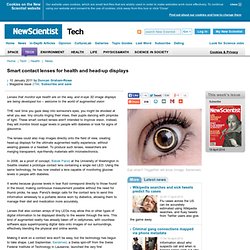 These smart contact lenses aren't intended to improve vision. Instead, they will monitor blood sugar levels in people with diabetes or look for signs of glaucoma. The lenses could also map images directly onto the field of view, creating head-up displays for the ultimate augmented reality experience, without wearing glasses or a headset. To produce such lenses, researchers are merging transparent, eye-friendly materials with microelectronics. In 2008, as a proof of concept, Babak Parviz at the University of Washington in Seattle created a prototype contact lens containing a single red LED. Making it work on a contact lens won't be easy, but the technology has begun to take shape. Paulo Blikstein and Arnan Sipitakiat - "How open hardware can revolutionize education (or how we might fail miserably)" Inside Tessel, The JavaScript Microcontroller That Is Changing Everything ⚙ Co.

In early October, startup Technical Machine blew up the crowdfunding scene with its first product: Tessel, an open-source, Arduino-like microcontroller that runs JavaScript on the chip. 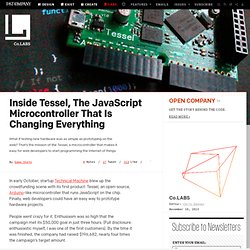 Finally, web developers could have an easy way to prototype hardware projects. People went crazy for it. Enthusiasm was so high that the campaign met its $50,000 goal in just three hours. (Full disclosure: enthusiastic myself, I was one of the first customers). Honeywell HumidIcon™ Digital Humidity/Temperature Sensors. Grove - Moisture Sensor - Wiki. This Moisture Sensor can be used to detect the moisture of soil or judge if there is water around the sensor, let the plants in your garden reach out for human help. 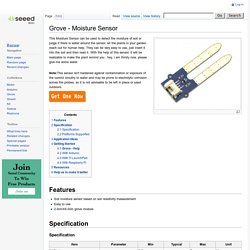 They can be very easy to use, just insert it into the soil and then read it. With the help of this sensor, it will be realizable to make the plant remind you : hey, i am thirsty now, please give me some water. Raspberry Pi: 15 Accessories Elevate Pi From Novelty to Workhorse. The Pi is indeed moving along at a rapid rate (for the hobyist/Education), as well as interfacing to the Arduino boards, there now exists a small FPGA solution: Bugblat TIF (Tiny FPGA Board) & PIF (FPGA for Raspberry Pi) The TIF is a tiny board (25mm long, 18mm wide). 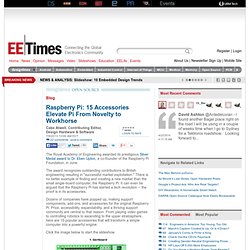 It's got 20 pins arranged in two rows of 10 with a 3mm pitch, which makes it ideal for plugging into a breadboard or attaching it to a LTH circuit board. 16-Channel 12-bit PWM/Servo Shield - I2C interface ID: 1411 - $17.50. You want to make a cool Arduino robot, maybe a hexapod walker, or maybe just a piece of art with a lot of moving parts. 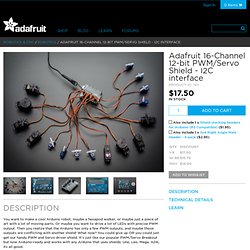 Or maybe you want to drive a lot of LEDs with precise PWM output. Then you realize that the Arduino has only a few PWM outputs, and maybe those outputs are conflicting with another shield! Bluetooth OBDII OBD2 Diagnostic Scanner, Scan tool check Engine Light CAR CODE READER for ELM327: Amazon.co.uk: Car & Motorbike. XLoBorg - Motion and direction sensor for your Raspberry Pi. Homemade GPS Receiver. Pictured above is the front-end, first mixer and IF amplifier of an experimental GPS receiver. 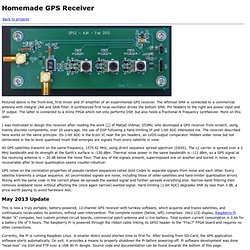 The leftmost SMA is connected to a commercial antenna with integral LNA and SAW filter. A synthesized first local oscillator drives the bottom SMA. Pin headers to the right are power input and IF output. Make: 3D Printing. Make: 3D Printing. RFduino - Home. Dream. Design. Do. » Blog Archive » Reversing an RGB LED remote. I have this dream to someday light our basement with RGB LEDs. 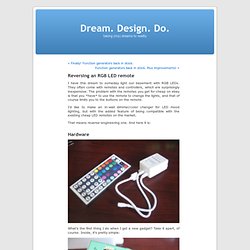 They often come with remotes and controllers, which are surprisingly inexpensive. The problem with the remotes you get for cheap on ebay is that you *have* to use the remote to change the lights, and that of course limits you to the buttons on the remote. SB-Projects: IR Remote Control, NEC Protocol. NEC Protocol To my knowledge the protocol I describe here was developed by NEC (Now Renesas). 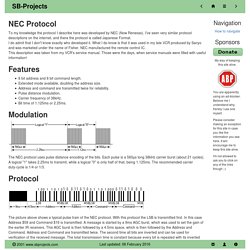 I've seen very similar protocol descriptions on the internet, and there the protocol is called Japanese Format. I do admit that I don't know exactly who developed it. What I do know is that it was used in my late VCR produced by Sanyo and was marketed under the name of Fisher. Reverse engineering an RGB LED remote. 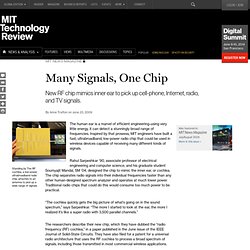 Inspired by that prowess, MIT engineers have built a fast, ultrabroadband, low-power radio chip that could be used in wireless devices capable of receiving many different kinds of signals. Rahul Sarpeshkar ‘90, associate professor of electrical engineering and computer science, and his graduate student Soumyajit Mandal, SM ‘04, designed the chip to mimic the inner ear, or cochlea. The chip separates radio signals into their individual frequencies faster than any other human-designed spectrum analyzer and operates at much lower power. Traditional radio chips that could do this would consume too much power to be practical. “The cochlea quickly gets the big picture of what’s going on in the sound spectrum,” says Sarpeshkar.

Opportunities and Challenges of Connected K-Covered Wireless Sensor Networks ... - Habib M. Ammari. Wireless sensor networks have received significant attention because of their important role and many conveniences in our lives. 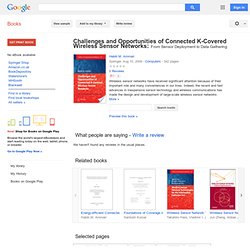 The Worlds Smallest Camera And DVR Digital Video Recorder All In One! EE Homepage.com Reports: 20080214. Michael Stanley & EE HomePage.comThis report is licensed under a Creative Commons Attribution 3.0 Unported License. Introduction Computer mice are ubiquitous. Most of us have several, and we take them for granted. Nasa Tech Briefs. Nanometer-scale materials can provide smaller devices than those currently available.

Ames Research Center, Moffett Field, California Recently, one-dimensional (1-D) nanostructures such as nanowires and nanotubes have become the focal point of research in nanotechnology due to their fascinating properties. These properties are intrinsically associated with low dimensionality and small diameters, which may lead to unique applications in various nanoscale devices. It is generally accepted that 1-D nanostructures provide an excellent test ground for understanding the dependence of physical, electrical, thermal, optical, and mechanical properties on material dimensionality and physical size. In particular, 1-D semiconductor nanostructures, which exhibit different properties as compared with their bulk or thin film counterparts, have shown great potential in future nanoelectronics applications in data storage, computing, and sensing devices.