Seekers who are lovers

OneTab shared tabs. The Math of God: Sacred Geometry. Peru's Ancient Cave Of Dangerous Energies. Pisces Decan 1 2016 Intuitive Reading. Friends in ‘High’ Places. Friends In ‘High’ Places Even a modest amount of reflection regarding our place in the Universe, plants the seed we may not be alone floating within the infinite sea of space. 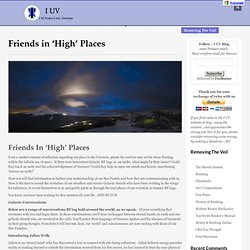 If there exist benevolent Galactic BE’ings in our midst, what might be their intent? Could they teach us unity and the acknowledgement of Oneness? Could they help us open our minds and hearts, manifesting ‘heaven on earth?’ Here you will find information to further your understanding of our Star Family and how they are communicating with us. You know you have been waiting for this moment all your life. Galactic Conversations Below are a range of conversations BE’ing held around the world, as we speak. Introducing Julien Wells Julien is an ‘eternal heart’ who has discovered a way to connect with star being collectives.

He does not ‘channel’ the star beings but speaks in his own words and understanding, from his awareness of them. Enjoy the conversations: Julien Wells – Oneness Space Session 18 July 2013 Click here.

Helical. Is Spiritual Science the Answer to Solving the Mysteries of Reality? Image credit: flickr.com/photos/gsfc/9937210254 Since the day we were born, we have been conditioned to think that our reality is made up of solid matter or solid materials. 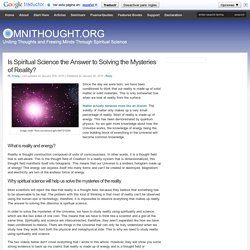 This is only somewhat true when we look at reality from the surface. Matter actually behaves more like an illusion. The solidity of matter only makes up a very small percentage of reality. Most of reality is made up of energy. What is reality and energy? Reality is thought construction composed of units of consciousness. Is Spiritual Science the Answer to Solving the Mysteries of Reality? Seekers who are lovers.

Knowledge is Power. Alternative News. Conspiracy Archives. 1. Interesting News. Scientists have found an Alien code in our DNA: Ancient Engineers. According to mainstream scientists: Alien code found in our DNA. 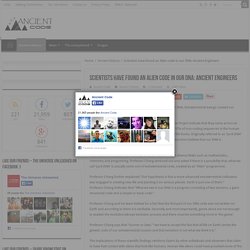 Extraterrestrial beings created our species. Researchers who worked for 13 years in the Human Genome Project indicate that they came across an amazing scientific discovery: They believe that the so-called 97% of non-coding sequences in the human DNA is nothing less than the genetic code of extraterrestrial life forms. Originally referred to as “Junk DNA” its functioned remained a mystery for researchers. Now researchers believe that our DNA is extraterrestrial in origin. After extensive analysis with the help of other researchers in diverse fields such as mathematics, chemistry and programing, Professor Chang ventured out and asked if there is a possibility that, what we call “junk DNA” is actually some sort of extraterrestrial code, created by an “Alien” programmer.

Professor Chang and his team believe for a fact that the first part of our DNA code was not written on Earth and according to them it is verifiable. Dr. Edgar Mitchell – Aliens Are Real And Are Watching Us. Cocteau Twins - Violaine (Otherness Version) Esoteric Agenda - Full Documentary. CERN WATCH: Extra Dimensions and Gravity's Rainbow. The Emperors NEWS Clothes.