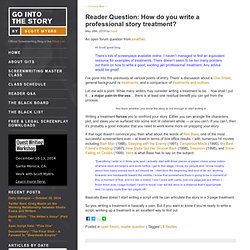 There’s lots of screenplays available online. I haven’t managed to find an equivalent resource for examples of treatments. There doesn’t seem to be too many pointers out there on how to write a good, exciting yet ‘professional’ treatment. Any advice would be great! I’ve gone into this previously at various points of entry. Let me add a point. You learn whether you know the story or not enough to start writing it. Writing a treatment forces you to confront your story. If that logic doesn’t convince you, then what about the words of Ron Bass, one of the most successful screenwriters ever – at least in terms of box office results – with numerous hit movies including Rain Man (1988), Sleeping with the Enemy (1991), Dangerous Minds (1995), My Best Friend’s Wedding (1997), How Stella Got Her Groove Back (1998), Stepmom (1998), and Snow Falling on Cedars (1999). Question: What is a treatment vs. an outline? An Open Forum question from januaryfire: Do you have a good definition of treatment and outline? 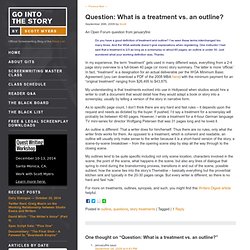 I’ve seen these terms interchanged too many times. And the WGA website doesn’t give explanations when registering. One instructor I had said that a treatment is 2/3 as long as a screenplay or about 60 pages; an outline is under 30. Just wondered what your working definition was. In my experience, the term “treatment” gets used in many different ways, everything from a 2-4 page story overview to a full-blown 40 page (or more) story summary. My understanding is that treatments evolved into use in Hollywood when studios would hire a writer to craft a document that would detail how they would adapt a book or story into a screenplay, usually by telling a version of the story in narrative form. 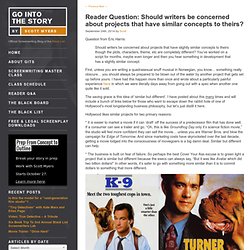 You’ve worked on a script for months, maybe even longer and then you hear something in development that has a slightly similar concept. First, unless you are writing a quadrasexual snuff musical in Norwegian, you know… something really obscure… you should always be prepared to be blown out of the water by another project that gets set up before yours. I have had this happen more than once and wrote about a particularly painful experience here in which we were literally days away from going out with a spec when another one quite like it sold. The saving grace is this idea of ‘similar but different’. Hollywood likes similar projects for two primary reasons: * It is easier to market a movie if it can ‘draft’ off the success of a predecessor film that has done well.

. * The business is built on fear of failure. Creative Spark: Dustin Lance Black. Manifesting creativity – strategies to create the spark that ignites the imagination. News and informationsautomotive,business,crime,health,life,politics,science,technology,travelautomotive,business,crime,health,life,politics,science,technology,travel Ideas often seem to appear at random, but I am not sure they are truly unpredictable, I believe there are ways to manifest creativity at will. 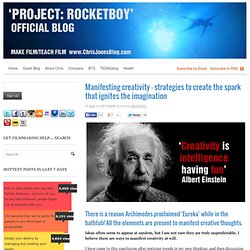 I have come to this conclusion after noticing trends in my own thinking, and then discussing with others what works for them too. It really boils down to a few simple factors. But what are creative thoughts? In my view it’s the ability to connect ideas that would never normally interact, and in doing so, a huge leap of possibility manifests. Creativity is as much present in the thought processes of entrepreneurs, engineers and scientists as it is in what we would consider as ‘story’ creativity. Hyper alertness Being super awake is key. Environments and activities you can use to stimulate creativity So what can we do? More HERE or get your pass with the widget below. 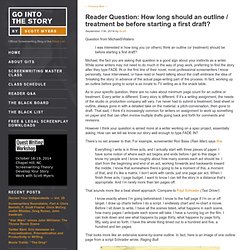 Michael, the fact you are asking that question is a good sign about your instincts as a writer. While some writers may not need to do much in the way of prep work, preferring to find the story after they type FADE IN or the first line of their novel, most professional screenwriters I know personally, have interviewed, or have read or heard talking about the craft embrace the idea of ‘breaking the story’ in advance of the actual page-writing part of the process. In fact, working up an outline before going to script is as innate to TV writing as is the snack table.