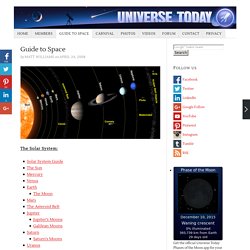 The Planets Today : A live view of the solar system. Has This New Discovery By Astronomers Confirmed there is a 'Planet X'? NASA space assets detect ocean inside Saturn moon. NASA’s Cassini spacecraft and Deep Space Network have uncovered evidence that Saturn’s moon Enceladus harbors a large underground ocean of liquid water, furthering scientific interest in the moon as a potential home to extraterrestrial microbes. 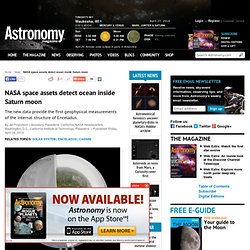 Researchers theorized the presence of an interior reservoir of water in 2005 when Cassini discovered water vapor and ice spewing from vents near the moon’s south pole. News and information about meteor showers, solar flares, auroras, and near-Earth asteroids. SkyandTelescope.com.

MESSENGER Web Site. Images. Ever wondered why Mars is red? One scientists thinks he knows. By Daily Mail Reporter Updated: 22:51 GMT, 2 April 2011 Mars has not always been red. 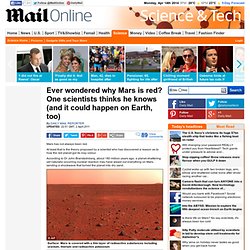 East Coprates Chasma Dune Fields and Wall Rock - Image of the Day - Images. Giant Asteroid Vesta Has Mountain Taller Than Anything on Earth. A NASA spacecraft orbiting the asteroid Vesta is revealing new details about the huge space rock's surface, including a massive mountain that rises taller than Mt. 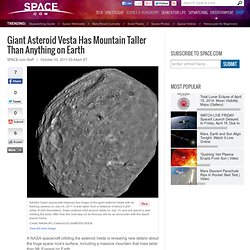 Everest on Earth. NASA's Dawn probe has been circling Vesta since mid-July, when it arrived in the asteroid belt that orbits the sun between Mars and Jupiter. So far, Dawn has beamed back surprising views of Vesta that revealed an enormous mountain in the asteroid's southern hemisphere and show that its crater surface is incredibly diverse place. S Cassini Spacecraft Obtains Best Views of Saturn Hexagon. Saturn, Earth, Mars and Venus Dazzle in Cassini Photo. On July 19, 2013, NASA's Cassini Saturn orbiter drifted behind the ringed gas giant, photographing this mosaic of Saturn blocking the sun. 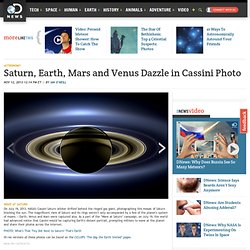 The magnificent view of Saturn and its rings weren't only accompanied by a few of the planet's system of moons -- Earth, Venus and Mars were captured also. As a part of the "Wave at Saturn" campaign, on July 19, the world had advanced notice that Cassini would be capturing Earth's distant portrait, prompting millions to wave at the planet and share their photos across the Internet. PHOTO: What's That Tiny Dot Next to Saturn? The Day the Earth Smiled. On July 19, 2013, in an event celebrated the world over, NASA's Cassini spacecraft slipped into Saturn's shadow and turned to image the planet, seven of its moons, its inner rings -- and, in the background, our home planet, Earth. With the sun's powerful and potentially damaging rays eclipsed by Saturn itself, Cassini's onboard cameras were able to take advantage of this unique viewing geometry. They acquired a panoramic mosaic of the Saturn system that allows scientists to see details in the rings and throughout the system as they are backlit by the sun.

This mosaic is special as it marks the third time our home planet was imaged from the outer solar system; the second time it was imaged by Cassini from Saturn's orbit; and the first time ever that inhabitants of Earth were made aware in advance that their photo would be taken from such a great distance. This image spans about 404,880 miles (651,591 kilometers) across. For more information about the Cassini Solstice Mission visit and. NASA'S CASSINI SPACECRAFT PROVIDES NEW VIEW OF SATURN AND EARTH (Cassini Press Release) MEDIA RELATIONS OFFICE CASSINI IMAGING CENTRAL LABORATORY FOR OPERATIONS (CICLOPS) SPACE SCIENCE INSTITUTE, BOULDER, COLORADO Steve Mullins (720)974-5823CICLOPS/Space Science Institute, Boulder, Colo.

When it comes to determining exactly where in the solar system life began, things have never been so up in the air. 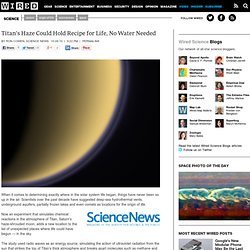 River Networks On Titan Point To Puzzling Geologic History Eurasia Review. By Eurasia Review For many years, Titan’s thick, methane- and nitrogen-rich atmosphere kept astronomers from seeing what lies beneath. Saturn’s largest moon appeared through telescopes as a hazy orange orb, in contrast to other heavily cratered moons in the solar system. Jupiter et ses satellites. Around the Solar System - In Focus. Robotic probes launched by NASA, the European Space Agency (ESA), and others are gathering information all across the solar system. 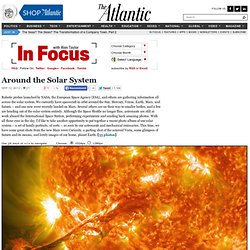 We currently have spacecraft in orbit around the Sun, Mercury, Venus, Earth, Mars, and Saturn -- and one new rover recently landed on Mars. Several others are on their way to smaller bodies, and a few are heading out of the solar system entirely. Space, Stars, Mars, Earth, Planets and More. WebStars: Astrophysics in Cyberspace. This list of astronomical resource sites is intended as a resource for users who have a general interest in astronomical topics. 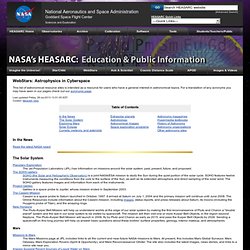 For a translation of any acronyms you may have seen in our pages check out our acronyms page. In the News Read the latest NASA news! The Solar System Planetary Exploration. Giant Ribbon Discovered at the Edge of the Solar System. + Play Audio | + Download Audio | + Join mailing list October 15, 2009: For years, researchers have known that the solar system is surrounded by a vast bubble of magnetism. 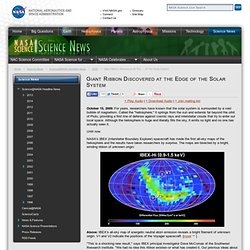 Called the "heliosphere," it springs from the sun and extends far beyond the orbit of Pluto, providing a first line of defense against cosmic rays and interstellar clouds that try to enter our local space. Although the heliosphere is huge and literally fills the sky, it emits no light and no one has actually seen it. Until now. How Was the Solar System Formed? Scientists aren't completely sure how the solar system formed, but most agree the best explanation is that a cloud of molecules collapsed inward on itself, forming our solar system about 4.6 billion years ago. 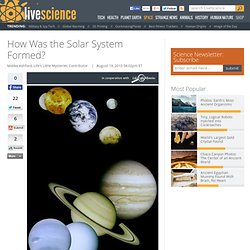 In this description, called the nebular model, our sun coalesced first, surrounded by a spinning disk of gas and dust. How the sun formed Some evidence, such as a 2010 study from scientists at the Carnegie institution, suggests this contraction could have been spurred by a burst from nearby supernovas . Other forces like differences in density could also have caused the cloud begin collapsing according to "From Suns to Life: A Chronological Approach to the History of Life on Earth" (Springer, 2004), an astronomy review text. 5 things about Friday's space events. By Elizabeth Landau, CNN About 1,000 people have been injured in Russia as the result of a meteor exploding in the air. The energy of the detonation appears to be equivalent to about 300 kilotons of TNT, said Margaret Campbell-Brown of the department of physics and astronomy at the University of Western Ontario.

Meanwhile, an asteroid approached Earth but did not hit it Friday, coming closest at about 2:25 p.m. ET. Asteroid near Earth: 2012 DA14 to pass within 17,000 miles of us on Feb. 15. The Asteroid That Is Coming Really Close To Earth. In February, Asteroid 2012 DA 14 will come so close to earth that it will be nearer to our planet than many satellites are. Meteorite’s spectacular fall captured on video. Orbiting Earth 101: What You’d See / What You’d Do. Astronaut's View. Pinpoints equinox, solstice and cross quarter moments throughout the year. Moon Phase. Current Moon Phase. Eyes on the Solar System. Eyes on the Solar System.