Snakes in the MRI Machine: A Study of Courage. You are in an MRI machine. 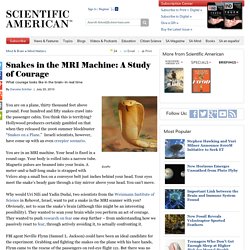 Your head is fixed in a round cage. The Science Of Conquering Your Fears. Aristotle believed courage to be the most important quality in a man. 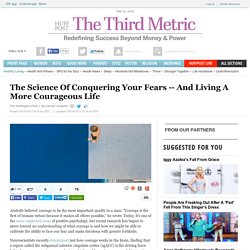 “Courage is the first of human virtues because it makes all others possible," he wrote. The left brain knows what the right hand is doing. Browse through a list of history's most famous left-handers and you are likely to see Albert Einstein's name. 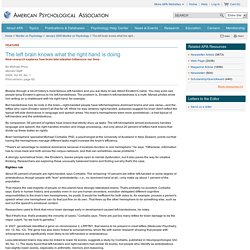 You may even see people tying Einstein's genius to his left-handedness. The problem is, Einstein's left-handedness is a myth. Myriad photos show him writing on a chalkboard with his right hand, for example. Multitasking:This is your Brain on Media. Meditation Gives Brain a Charge, Study Finds (washingtonpost.com) Neurotrophic factor expression in expandable cell populations from brain samples in living patients with Parkinson's disease. + Author Affiliations ↵1Correspondence: Department of Clinical Neurological Sciences (Neurosurgery), University of Western Ontario, 339 Windermere Rd., C7-134, London, ON, Canada N6A 5A5. 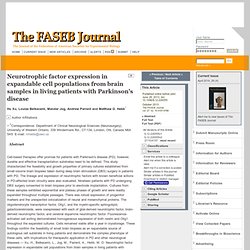 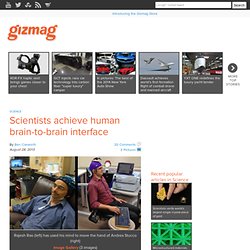 Rajesh Rao, who studies computational neuroscience at the University of Washington, has successfully used his mind to control the hand of his colleague, Andrea Stucco. The two were linked via a Skype connection. The experiment, which was conducted on Aug. 12th but announced just yesterday, worked as follows ... Rao put on a skull cap containing electrodes, which was in turn connected to an electroencephalography (EEG) machine. Via those electrodes, the machine was able to detect the electrical activity in his brain. Scientists afflict computers with 'schizophrenia' to better understand the human brain. Computer networks that can't forget fast enough can show symptoms of a kind of virtual schizophrenia, giving researchers further clues to the inner workings of schizophrenic brains, researchers at The University of Texas at Austin and Yale University have found. 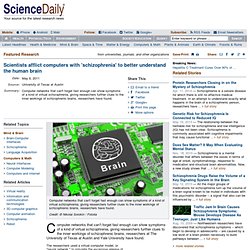 The researchers used a virtual computer model, or "neural network," to simulate the excessive release of dopamine in the brain. They found that the network recalled memories in a distinctly schizophrenic-like fashion. Their results were published in April in Biological Psychiatry. "The hypothesis is that dopamine encodes the importance-the salience-of experience," says Uli Grasemann, a graduate student in the Department of Computer Science at The University of Texas at Austin. Ecology of Mind - (Build 20100722150226) Human Emotion: We Report Our Feelings in 3-D. Says new study in Biological Psychiatry Philadelphia, PA, March 26, 2013 Like it or not and despite the surrounding debate of its merits, 3-D is the technology du jour for movie-making in Hollywood. 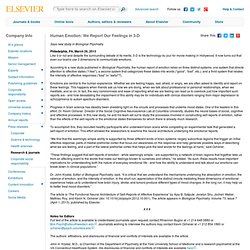 It now turns out that even our brains use 3 dimensions to communicate emotions. Depression: Here's a gene that may make some folks more susceptible. Depression strikes a huge number of Americans at one time or another of their lives -- and studies show that genes are involved in susceptibility to this awful “Black Dog,” as Winston Churchill used to term his struggle with the mood disorder. 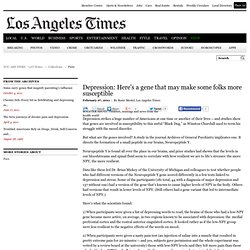 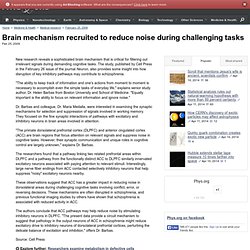 The study, published by Cell Press in the February 26 issue of the journal Neuron, also provides some insight into how disruption of key inhibitory pathways may contribute to schizophrenia. "The ability to keep track of information and one's actions from moment to moment is necessary to accomplish even the simple tasks of everyday life," explains senior study author, Dr. Helen Barbas from Boston University and School of Medicine. "Equally important is the ability to focus on relevant information and ignore noise. " Dr. "The primate dorsolateral prefrontal cortex (DLPFC) and anterior cingulated cortex (ACC) are brain regions that focus attention on relevant signals and suppress noise in cognitive tasks. 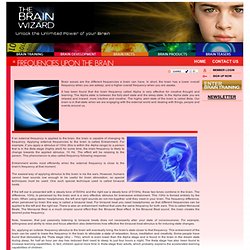 Mind-Controlled Musical Instrument Helps Paralysis Patients Rehabilitate. Music Through the Mind Eduardo Miranda Paralysis patients could play music with their minds , using a new brain-control interface that senses brain impulses and translates them into musical notes. Users must teach themselves how to associate brain signals with specific tasks, causing neuronal activity that the brain scanners can pick up. Then they can make music. It’s a pretty unique use of brain-computer interfaces, which are already being used to do things like drive cars , control robots and play video games. How Sight and Sound Can Trick Your Brain. Auditory and visual information in the brain can conspire to trick us into seeing things that are not there, according to new research that suggests our senses are more intimately linked than previously suspected. Researchers found that subjects shown a single flash of light sandwiched between two tones in quick succession reported seeing an illusory second light flash.

The finding, detailed in the April 12 issue of the Journal of Neuroscience, suggests the brain takes only a matter of milliseconds to combine auditory and visual information, much faster than scientists thought possible. A direct link. Key to All Optical Illusions Discovered. Humans can see into the future, says a cognitive scientist.

It's nothing like the alleged predictive powers of Nostradamus, but we do get a glimpse of events one-tenth of a second before they occur. And the mechanism behind that can also explain why we are tricked by optical illusions. Researcher Mark Changizi of Rensselaer Polytechnic Institute in New York says it starts with a neural lag that most everyone experiences while awake. When light hits your retina, about one-tenth of a second goes by before the brain translates the signal into a visual perception of the world. Scientists already knew about the lag, yet they have debated over exactly how we compensate, with one school of thought proposing our motor system somehow modifies our movements to offset the delay.

Brain Dead: Strange Find Analyzed. A 2,500-year-old human skull uncovered in England was less of a surprise than what was in it: the brain. The discovery of the yellowish, crinkly, shrunken brain prompted questions about how such a fragile organ could have survived so long and how frequently this strange type of preservation occurs. Skulls of Spanish Women Grew Over 300 Years. Like his body, a man's skull and its features are generally larger than a woman's. An analysis of Spanish skulls spanning approximately 300 years showed, however, that the difference between the sexes' cranial features shrank over time. This conclusion is based on examinations of more than 200 crania — the part of the skull that holds the brain — contained in two collections, one amassed during the 19th century by a doctor, and one from an excavated cemetery dating back to the 16th through 17th centuries.

While both sexes' crania got bigger, women's grew more, decreasing the gender gap, the researchers found. There are multiple factors that could explain this change, according to lead researcher Ann Ross, an anthropologist at North Carolina State University. These include changes in nutrition, living conditions and genetic influences on the populations from which the skulls came — the earlier collection came from a more localized population, according to Ross. Do Brains Shrink As We Age? As we get older, our brains get smaller, or at least that's what many scientists believe. But a new study contradicts this assumption, concluding that when older brains are "healthy" there is little brain deterioration, and that only when people experience cognitive decline do their brains show significant signs of shrinking. The results suggest that many previous studies may have overestimated how much our brains shrink as we age, possibly because they failed to exclude people who were starting to develop brain diseases, such as dementia, that would lead to brain decay, or atrophy.

Top 10 Mysteries of the Mind. By Jeanna Bryner, Live Science Managing Editor | October 09, 2007 01:25pm ET. Is Your Brain Sleeping While You're Awake? The Brain Sees What We Don't. Sweet dreams are made of geomagnetic activity - life - 01 April 2009. Looking for an explanation for recurring nightmares of leaving the house without your trousers on or losing your teeth?

New research suggests you can blame the Earth's magnetic field, rather than a repressed childhood.