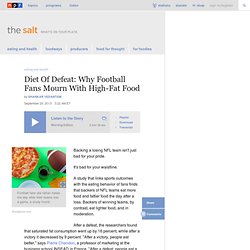 Backing a losing NFL team isn't just bad for your pride. It's bad for your waistline. A study that links sports outcomes with the eating behavior of fans finds that backers of NFL teams eat more food and fattier food the day after a loss. After a defeat, the researchers found that saturated fat consumption went up by 16 percent, while after a victory it decreased by 9 percent.

In many ways, the research fits with what we already know about the psychology of eating. Chandon and his co-author Yann Cornil, also at INSEAD, find the same thing happening with sports defeats. Why Schools Should Keep Teaching Handwriting, Even If Typing Is More Useful. Screenshot / Zaner-Bloser Publishing A sample from handwriting materials Columbus, Ohio, publishing company Zaner-Bloser makes for kindergarteners. 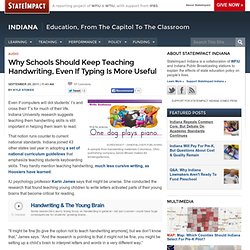 Even if computers will dot students’ I’s and cross their T’s for much of their life, Indiana University research suggests teaching them handwriting skills is still important in helping them learn to read. That notion runs counter to current national standards. Indiana joined 43 other states last year in adopting a set of national curriculum guidelines that emphasize teaching students keyboarding skills. They hardly mention teaching handwriting, much less cursive writing, as Hoosiers have learned. IU psychology professor Karin James says that might be unwise. Handwriting & The Young BrainSome researchers worry losing focus on handwriting in general—not just cursive—could have huge consequences for students’ growing brains.Download “It might be fine [to give the option not to teach handwriting anymore], but we don’t know that,” James says. The Year Of The Higgs, And Other Tiny Advances In Science. Hide captionScientists at the Large Hadron Collider announced the discovery of the Higgs boson on July 4, the long-sought building block of the universe. 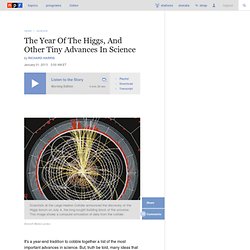 The Higgs is a long-sought building block of the universe. "There are certainly a number of physicists who are actually disappointed," says Sam Arbesman, a scientist and mathematician at the Kauffman Foundation. Arbesman and science historian W. Women With A Berry-Snacking Habit May Have Healthier Hearts : The Salt. Hide captionRegular consumption of blueberries, such as these found at Butler's Orchard in Maryland, may prevent heart attacks in middle-aged women. 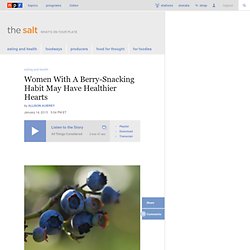 Maggie Starbard/NPR When it comes to supernutritious foods, the blueberry has long had a health halo floating over it. Going back to Colonial times when Native Americans and English settlers ground up blueberries and added them to porridge, in both dried and fresh forms, there have been hints of health-promoting effects. In recent years, regular consumption of berries has been linked to better brain health and a decreased risk of Type 2 diabetes.

Now, a new study published in the American Heart Association's journal Circulation suggests eating three servings per week of blueberries and strawberries helps cut the risk of heart attacks among some women. It's certainly not a perfect way to detect how certain foods may influence health, but it identifies important associations. So what's in blueberries that makes them so good for us? So, go ahead. 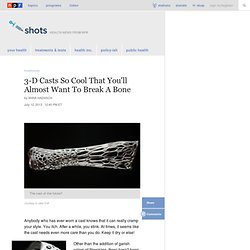 Courtesy of Jake Evill The cast of the future? Anybody who has ever worn a cast knows that it can really cramp your style. You itch. After a while, you stink. Hide captionThe waterproof material of the Cortex cast may hold up better in high-stress areas, such as hands. Other than the addition of garish colors of fiberglass, there hasn't been much innovation in cast technology in what seems like forever. The idea, which we first saw described by Wired, seems simple enough. The patient gets a superheroish exoskeleton that is sleek, breathable, durable, and perhaps best of all, shower-ready.

Shots spoke with Dr. Hide captionWhich would you prefer? Top: iStockphoto, Bottom: Courtesy of Jake Evill. A Patch Designed To Make You Invisible To Mosquitoes : All Tech Considered. Hide captionResearchers have come up with an innovative patch to help you win the war against mosquitoes. 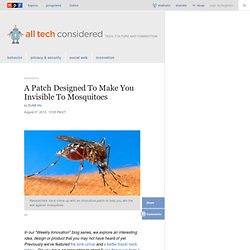 Researchers have come up with an innovative patch to help you win the war against mosquitoes. In our "Weekly Innovation" blog series, we explore an interesting idea, design or product that you may not have heard of yet. Previously we've featured the sink-urinal and a better travel neck pillow. (Do you have an innovation to share? Use this quick form.)