Know Your Lore, Tinfoil Hat Edition: The Curse of Flesh. The World of Warcraft is an expansive universe. 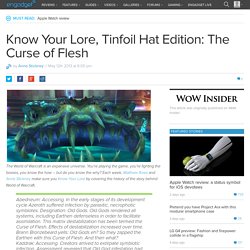 You're playing the game, you're fighting the bosses, you know the how -- but do you know the why? Each week, Matthew Rossi and Anne Stickney make sure you Know Your Lore by covering the history of the story behind World of Warcraft. A short history of Activision Blizzard or how... Petopia: Mists of Pandaria. WarcraftPets.com - WoW Battle Pets, Companions and Vanity Pets. 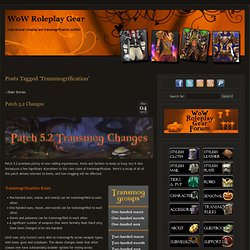 After twenty-four events spanning more than six months, the WoW Factor is now going into hibernation in preparation for Mists of Pandaria, but our finale on Deathwing was certainly a great way to end our first season of transmogrification events. Attendance was booming, with numerous visitors from other realms joining the Deathwing population to turn Sunfury Spire into a hive of activity long before the event itself began. The regular WoW Factor hosts were once more joined by Caylena as the guest judge for the week.

It was her sixth outing as a guest judge, but this event seemed more relevant than ever, as Caylena is a Deathwing local player herself, and had been eager to see a WoW Factor event on the realm since we first began. Iran's World of Warcraft fans blocked in line with US embargo, refused refunds. IranianWorld of Warcraft fans have been left outraged after the US company behind the game abruptly halted access in accordance with trade sanctions and refused to offer refunds. 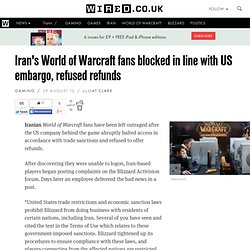 After discovering they were unable to logon, Iran-based players began posting complaints on the Blizzard Activision forum. Days later an employee delivered the bad news in a post. "United States trade restrictions and economic sanction laws prohibit Blizzard from doing business with residents of certain nations, including Iran. Several of you have seen and cited the text in the Terms of Use which relates to these government-imposed sanctions. 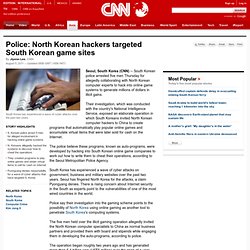 Their investigation, which was conducted with the country's National Intelligence Service, exposed an elaborate operation in which South Koreans invited North Korean computer hackers to China to create programs that automatically play popular online games and accumulate virtual items that were later sold for cash on the Internet. South Korea arrests five over gaming scam 'linked to hackers in North' South Korean police said Thursday that they have arrested five people who allegedly collaborated with North Korean hackers to steal millions of dollars in points from online gaming sites. 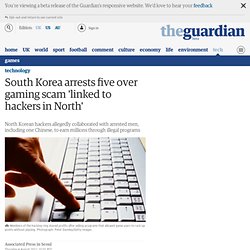 The five, including a Chinese man, were arrested and another nine people were booked without physical detainment after they worked with North Koreans to hack gaming sites in the South, the Seoul metropolitan police agency said in a statement. Members of the gang, which included North Korea's technological elite, worked in China and shared profits after they sold programs that allowed users to rack up points without actual play, police said. The points were later exchanged for cash through sites where players trade items to be used for their avatars. The police said the gang made about $6m (£3.7m) over the last year and a half. Tales of the Past 2 "FULL MOVIE" / "Machinima Film" Tales of the Past 3 "FULL MOVIE, / "Machinima Film"

5 Bizarre Ways Online Gaming Is Affecting the Real World. Every time there's a violent tragedy, we hear over and over that video games are to blame, leading everyone who has actually touched a joystick (or knows what that is) to automatically roll their eyes. 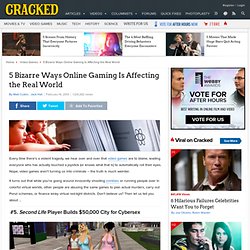 Nope, video games aren't turning us into criminals -- the truth is much weirder. It turns out that while you're going around innocently shooting zombies or running people over in colorful virtual worlds, other people are abusing the same games to plan actual murders, carry out Ponzi schemes, or finance kinky virtual red-light districts. WoW Addons, Minecraft Mods, Curse Client and Gaming News. Ultraxion Detailed Strategy Guide (Heroic Mode included) Introduction This guide is intended to provide a comprehensive description of the encounter with Ultraxion in Dragon Soul. 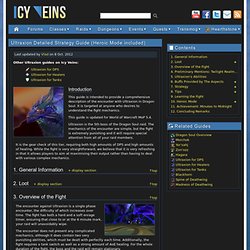 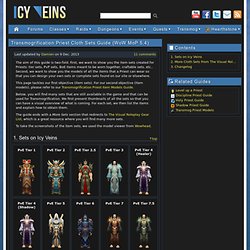 First, we want to show you the item sets created for Priests: tier sets, PvP sets, BoE items meant to be worn together, craftable sets, etc..