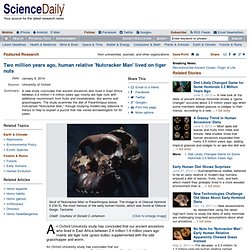 An Oxford University study has concluded that our ancient ancestors who lived in East Africa between 2.4 million-1.4 million years ago survived mainly on a diet of tiger nuts. Tiger nuts are edible grass bulbs still eaten in parts of the world today. The study published in the journal, PLOS ONE, also suggests that these early hominins may have sought additional nourishment from fruits and invertebrates, like worms and grasshoppers. Humans Tamed Fire by 1 Million Years Ago. Image: matthewvenn via Flickr The ability to control fire marked a major milestone in human evolution, helping our ancestors stay warm in the cold, enhance the nutritional value of their food and keep predators at bay, among other uses. 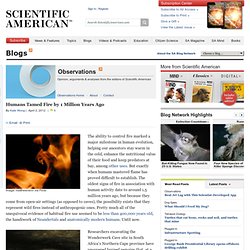 But exactly when humans mastered flame has proved difficult to establish. The real caveman diet: What did people eat in prehistoric times? Janek Skarzynski/AFP/Getty Images. 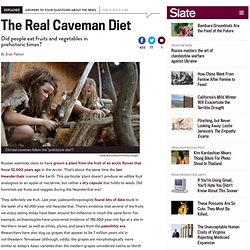 Russian scientists claim to have grown a plant from the fruit of an arctic flower that froze 32,000 years ago in the Arctic. That’s about the same time the last Neanderthals roamed the Earth. This particular plant doesn't produce an edible fruit analogous to an apple or nectarine, but rather a dry capsule that holds its seeds. Did hominids eat fruits and veggies during the Neanderthal era? They definitely ate fruit. Vegetables are a different story. Cavemen Ground Flour, Prepped Veggies. - People started grinding flour at least 30,000 years ago, new evidence suggests. - Prehistoric humans, and possibly Neanderthals, likely made bread and soup out of cattail flour. - The findings suggest that starches and vegetables played an important role in Paleolithic diets. 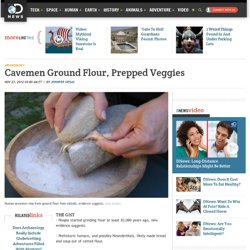 Dirty "kitchen" tools reveal that cavemen were grinding their own flour and preparing vegetables for meals at least 30,000 years ago, according to new research. The discoveries represent the oldest evidence for flour preparation and plant food processing. Since the techniques were already well established during the Mid-Upper Paleolithic Period, it's likely that modern humans, and possibly even Neanderthals, incorporated far more plant products into their diets than presently believed. Early chefs left indelible mark on human evolution - life - 22 March 2003. THE idea that the invention of cooking fundamentally influenced our evolutionary past has been given a boost by a study of modern diets. 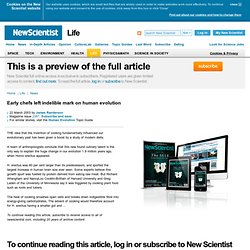 A team of anthropologists conclude that this new found culinary talent is the only way to explain the huge change in our evolution 1.9 million years ago, when appeared. was 60 per cent larger than its predecessors, and sported the largest increase in human brain size ever seen. Some experts believe this growth spurt was fuelled by protein derived from eating raw meat. Early Humans Skipped Fruit, Went for Nuts. Our human ancestors did not eat much fruit, but instead consumed a lot of root vegetables, nuts, insects and some meat, according to a new study. 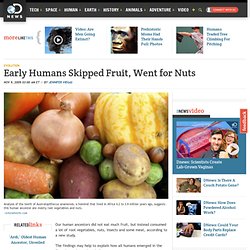 The findings may help to explain how all humans emerged in the first place, the authors believe. Early hominid ancestors may have left the trees to take advantage of ground-level foods, a behavioral shift that could have resulted in two of the major defining characteristics of humans: unique teeth and walking on two legs, a mode of locomotion known as bipedalism that is extremely rare elsewhere in the animal kingdom. Savanna chimpanzees use tools to ha... [Proc Natl Acad Sci U S A. 2007. Popular Science taps UCSC anthropologist Nathaniel Dominy for "Brilliant 10" issue. Popular Science magazine has named UC Santa Cruz anthropologist Nathaniel J. 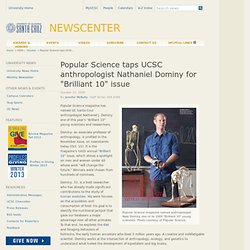 Dominy one of this year's "Brilliant 10" young scientists and researchers. Dominy, an associate professor of anthropology, is profiled in the November issue, on newsstands today (Oct. 15). It is the magazine's ninth annual "Brilliant 10" issue, which shines a spotlight on men and women under 40 whose work "will change the future. " We Are What They Ate. We Are What They Ate By Jennifer McNulty (831) 459-2495; jmcnulty@ucsc.edu If anthropologist Nathaniel Dominy had a time machine, he’d set the dial for 2 million years ago and transport himself back in time. 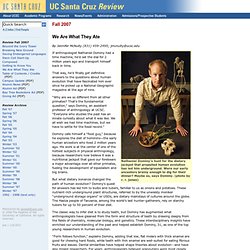 That way, he’d finally get definitive answers to the questions about human evolution that have fascinated him ever since he picked up a National Geographic magazine at the age of nine. Nathaniel J. Dominy. First Foodies Expanded Diet 3.5 Million Years Ago. Our ancestors used to dine almost exclusively on leaves and fruits from trees, shrubs and herbs until 3.5 million years ago when a major shift occurred, according to four new simultaneously published studies. 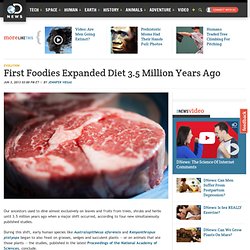 During this shift, early human species like Australopithecus afarensis and Kenyanthropus platyops began to also feast on grasses, sedges and succulent plants — or on animals that ate those plants — the studies, published in the latest Proceedings of the National Academy of Sciences, conclude. VIDEO: How Old Is the Human Race? 'Nutcracker Man' Ate Tiger Nuts (Not What it Sounds Like) A strong-jawed extinct relative of humans called "Nutcracker Man" might have lived up to its name by munching on tiger nuts — that is, grass bulbs known as tiger nuts still eaten in parts of the world today, researchers say. 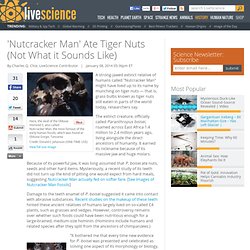 The extinct creature, officially called Paranthropus boisei, roamed across East Africa 1.4 million to 2.4 million years ago, living alongside the direct ancestors of humanity. It earned its nickname because of its massive jaw and huge molars. New technologies challenge old ideas about early hominid diets. New assessments by researchers using the latest high-tech tools to study the diets of early hominids are challenging long-held assumptions about what our ancestors ate, says a study by the University of Colorado Boulder and the University of Arkansas. Qph.is.quoracdn.

Early Human Ancestors Ate Grass. Early human ancestors in central Africa 3.5 million years ago ate a diet of mostly tropical grasses and sedges, finds new research. The study suggests our relatives were mostly plant-eaters before they evolved a taste for meaty flesh. Consider that tidbit while passing around the creamed spinach during Thanksgiving dinner. PHOTOS: Faces of Our Ancestors The study focused on Australopithecus bahrelghazali, which had quite a set of teeth. You can see a reconstruction of this human relative here. Human Ancestors Were Nearly All Vegetarians. Diet and body. Photos: The Life of Nutcracker Man. Reconstructing the diet of African hominid Australopithecus anamensis.