1:32 scale model airplanes are an exciting category because their large size tends to create more drama than smaller airplane scales. Along with the increased size comes added detail and realism that makes for imposing displays and impactful presentations. 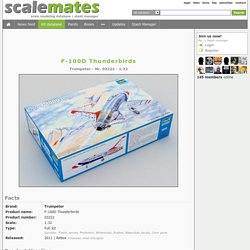 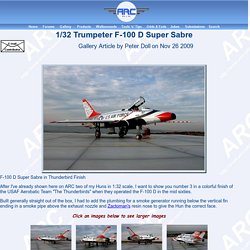 Built generally straight out of the box, I had to add the plumbing for a smoke generator running below the vertical fin ending in a smoke pipe above the exhaust nozzle and Zactoman's resin nose to give the Hun the correct face. Click on images below to see larger images Many articles have already been written on Trumpeter's big Hun, so I don't have to say much about the building and the quality of the kit. Only the kit's intake has to be corrected and that is a must. Unfortunately CAM has not yet released his forthcoming decals for a Thunderbird-Hun, so I had to paint my model with handmade masks.

As you can see my Hun-Fleet is growing and I swear that this was not my last model of this type. Peter Doll. 79th TFS 1/32 Trumpeter F-100D - Ready for Inspection - Aircraft. Trumpeter 02232: 1/32 North American F-100D. A brief history of the F-100 Super Sabre The first in the legendary "Century Series" of USAF fighter jets, North American aviation developed the F-100 as a evolutionary step from the F-86 Saber. 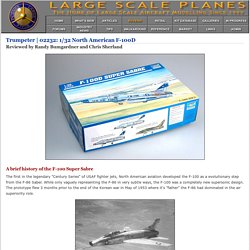 While only vaguely representing the F-86 in very subtle ways, the F-100 was a completely new supersonic design. The prototype flew 3 months prior to the end of the Korean war in May of 1953 where it's "father" the F-86 had dominated in the air superiority role. The F-100 went through initial teething pains as many aviation programs do, but the design was clearly ushering in the next generation of supersonic fighters, and the USAF took delivery in 1954. Indeed the "Hun" as it was to be called was the first fighter in the USAF inventory to exceed the speed of sound in level flight.

The F-100 claimed one of the first air to air combat victories over Viet Nam, shooting down a MiG-17 with it's 4 20mm cannon. 1/32 Trumpeter  F-100 D "Super Sabre" by Peter Doll. As already mentioned in my previous articles on ARC, I am a big fan of colourful USAF-Jets of the Cold War in their shiny natural metal finish and I couldn't wait to build Trumpeters Hun in the big scale, after having already filled my display cases with Monograms F-100's in 1:48. 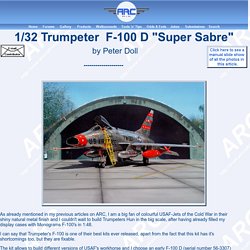 I can say that Trumpeter's F-100 is one of their best kits ever released, apart from the fact that this kit has it's shortcomings too, but they are fixable. The kit allows to build different versions of USAF's workhorse and I choose an early F-100 D (serial number 56-3307) flown by the commander of the 417 TFS/50 TFW while stationed at Ramstein A.B. Germany in the late fifties. The squadron markings consisted of a red band around the nose and two horizontal parallel bands across the fin with white stars superimposed on the bands. The squadron badge was placed in the center of the fin between the two bands. 56-3307, the boss bird, had a smaller third band in which the squadron badge was superimposed. Trumpeter F-100D Super Sabre 1:32 Scale. I. 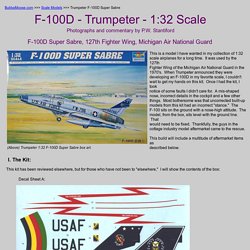 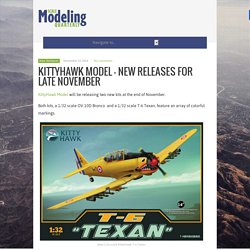