1968 Olympic Games &the 2 October Massacre. The [1968] Games was awarded to Mexico but, due to financial constraints and the general condition of the country’s economy, a much less ambitious approach was taken. 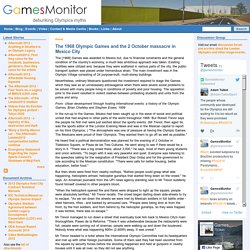 Existing facilities were utilized and, because they were scattered in various parts of the city, the public transport system was placed under tremendous strain. The main investment was in the Olympic Village consisting of 24 purpose-built, multi-storey buildings. Nevertheless, ordinary Mexicans questioned the investment required to stage the Games which they saw as an unnecessary extravagance when there were severe social problems to be solved with many people living in conditions of poverty and poor housing.

The opposition prior to the event resulted in violent clashes between protesting students and units from the police and army. From: Urban development through hosting international events: a history of the Olympic Games, Brian Chalkley and Stephen Essex, 1999. Untitled. 'The most terrifying night of my life'–R.Trevor. In October 1968, British journalist Robert Trevor was in Mexico City getting ready to cover the Olympic Games which were about to start. 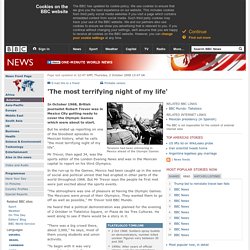 But he ended up reporting on one of the bloodiest episodes in Mexican history, what he calls "the most terrifying night of my life". Mr Trevor, then aged 34, was the sports editor of the London Evening News and was in the Mexican capital to report on his third Olympics. In the run-up to the Games, Mexico had been caught up in the wave of social and political unrest that had erupted in other parts of the world throughout 1968. But Mr Trevor says the people he first met were just excited about the sports events. Tlatelolco massacre. At the time, the government and the mainstream media in Mexico claimed that government forces had been provoked by protesters shooting at them.[1] But government documents made public since 2000 suggest that the snipers had been employed by the government. 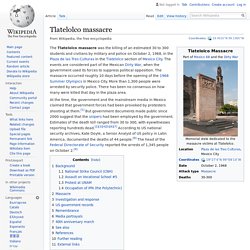 Estimates of the death toll ranged from 30 to 300, with eyewitnesses reporting hundreds dead.[2][3][4][5][6][7] According to US national security archives, Kate Doyle, a Senior Analyst of US policy in Latin America, documented the deaths of 44 people.[8] The head of the Federal Directorate of Security reported the arrests of 1,345 people on October 2.[9] Background[edit] "The year 1968 in Mexico City was a time of expansiveness and the breaking down of barriers: a time for forging alliances among students, workers, and the marginal urban poor and challenging the political regime. It was a time of great hope, seemingly on the verge of transformation. National Strike Council (CNH)[edit] Night of Tlatelolco Preceded by Months of Political Unrest. Oct 2, 2015 In the summer of 1968, Mexico was experiencing the birth of a new student movement. 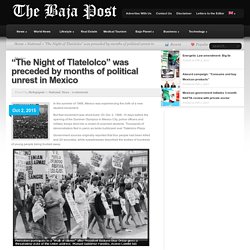 But that movement was short-lived. On Oct. 2, 1968, 10 days before the opening of the Summer Olympics in Mexico City, police officers and military troops shot into a crowd of unarmed students. Thousands of demonstrators fled in panic as tanks bulldozed over Tlatelolco Plaza. Centro Cultural Universitario Tlatelolco. Documental "El grito" Eyewitness Accounts– Oct. 2, 1968: `A brutal massacre’ and U.S. Government’s Role. By Malcolm Beith / The News / Oct 10, 2009 Clouds loomed as night closed in. 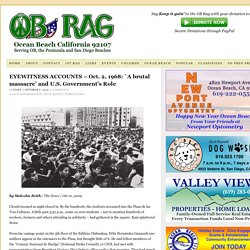 By the hundreds, the students streamed into the Plaza de las Tres Culturas. A little past 5:30 p.m., some 10,000 students – not to mention hundreds of workers, farmers and others attending in solidarity – had gathered in the square. Declassified Record on Tlatelolco Massacre Preceding ’68 Olympic Games. Mexican soldiers leading away protesters after the Tlatlelolco Massacre. 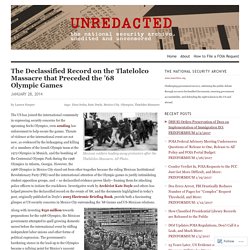 AP Photo. The US has joined the international community in expressing security concerns for the upcoming Sochi Olympics, even sending law enforcement to help secure the games. Threats of violence at the international event are not new, as evidenced by the kidnapping and killing of 11 members of the Israeli Olympic team at the 1972 Olympics in Munich, and the bombing of the Centennial Olympic Park during the 1996 Olympics in Atlanta, Georgia. However, the 1968 Olympics in Mexico City stand out from other tragedies because the ruling Mexican Institutional Revolutionary Party (PRI) used the international attention of the Olympic games to justify intimidating student opposition groups, and — as declassified evidence proves likely– framing them for attacking police officers to initiate the crackdown. 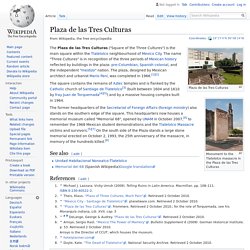