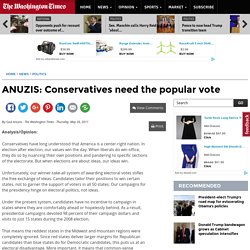 In election after election, our values win the day. When liberals do win office, they do so by nuancing their own positions and pandering to specific sections of the electorate. But when elections are about ideas, our ideas win. Unfortunately, our winner-take-all system of awarding electoral votes stifles the free exchange of ideas. Under the present system, candidates have no incentive to campaign in states where they are comfortably ahead or hopelessly behind. That means the reddest states in the Midwest and mountain regions were completely ignored. The truth is, under the present system, the only voices that matter are those of battleground states. And who can blame the campaigns for their myopia? DKos- Awarding electoral votes to the winner of the national popular vote. Could the Electoral College system ever change? Use one of the services below to sign in to PBS: You've just tried to add this video to your Watchlist so you can watch it later. 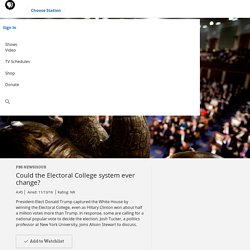 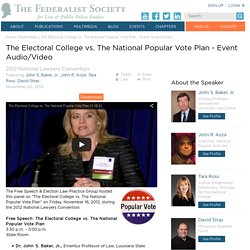 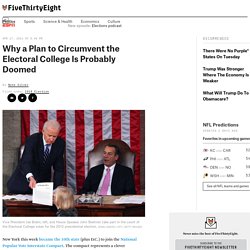 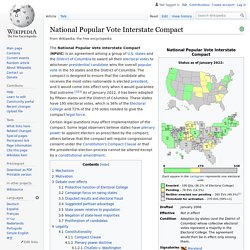 New Yorker- Misguided “Objectivity” on N.P.V. The New Republic’s ever-vigilant, hyper-smart Jonathan Chait had some highly intelligent things to say recently about the absurdities that flow from the assumption that “objectivity” in political journalism requires that Republicans and Democrats be treated as indistinguishably unscrupulous “mirror images of each other”: The problem is that this assumption has grown less and less true, which leaves journalists less and less able to describe reality in an accurate way. 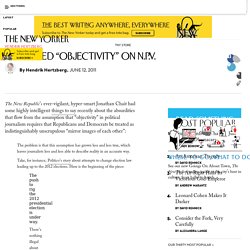 Take, for instance, Politico’s story about attempts to change election law leading up to the 2012 elections. Here is the beginning of the piece: The push to rig the 2012 presidential election is under way. There’s nothing illegal about it: Across the country, state legislatures are embroiled in partisan battles over election-law changes that, by design or effect, could play a significant role in determining the outcome of the presidency. After the lead Chait quotes, Politico’s story goes on for another 1,650 words. Outside the Box - WSJ.com. By PETE DU PONTMonday, August 28, 2006 12:01 A.M. 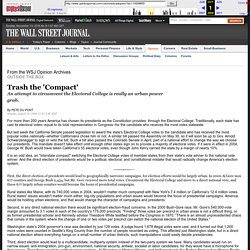 EDT For more than 200 years America has chosen its presidents as the Constitution provides: through the Electoral College. Traditionally, each state has cast its electoral votes--equal to its total representation in Congress--for the candidate who receives the most votes statewide. But last week the California Senate passed legislation to award the state's Electoral College votes to the candidate who has received the most popular votes nationally--whether Californians chose him or not. A similar bill passed the Assembly on May 30, so it will soon be up to Gov. It is an odd idea, an "interstate compact" switching the Electoral College votes of member states from their state's vote winner to the national vote winner. First, the direct election of presidents would lead to geographically narrower campaigns, for election efforts would be largely urban.

Second, in any direct national election there would be significant election-fraud concerns. Untitled.