"If you have nostalgia for the days when blacks kept quiet, gays were in the closet, immigrants were invisible and women stayed in the kitchen, Senator Jefferson Beauregard Sessions is your man.

No Senator has fought harder against the hopes and aspirations of Latinos, immigrants, and people of color than Sen. Sessions. He is a staunch opponent of legal immigration and someone who has blocked every effort to improve, modernize, and humanize our immigration system, which is two or three decades out-of-date. He ran for the Senate because he was deemed by the Senate Judiciary Committee as too racist to serve as a federal judge. He is the kind of person who will set back law enforcement, civil rights, the courts, and increase America’s mass incarceration industry and erase 50 years of progress." 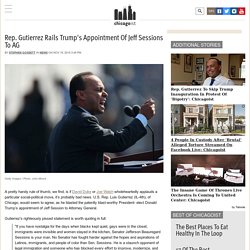 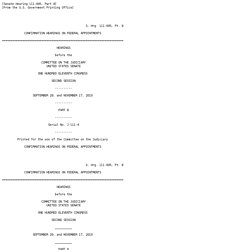 The Confirmation Sessions. Groups Call for Delay in Hearing Schedule. Sen. Jeff Sessions: Loyal To Trump, Defined By Race And Immigration. A lot has been said about the difficulty Donald Trump has had getting the Republican establishment behind him. 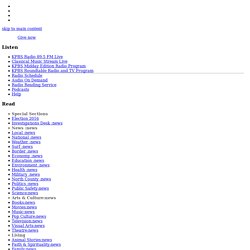 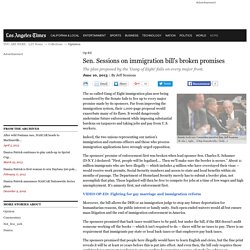 Jeff Sessions (R-Ala.), right,… (Chip Somodevilla / Getty…) The so-called Gang of Eight immigration plan now being considered by the Senate fails to live up to every major promise made by its sponsors. Far from improving the immigration system, their 1,000-page proposal would exacerbate many of its flaws. It would dangerously undermine future enforcement while imposing substantial burdens on taxpayers and taking jobs and pay from U.S. workers. Indeed, the two unions representing our nation's immigration and customs officers and those who process immigration applications have strongly urged opposition. MJ> Attorney General Sessions Would Be Good News for Private Prisons. Tom Williams/CQ Roll Call via AP When Donald Trump's victory on election night became clear, the shares of the largest private prison corporations shot up. 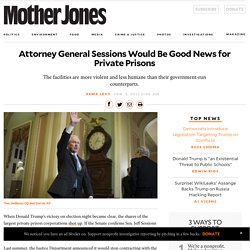 If the Senate confirms Sen. Jeff Sessions (R-Ala.) as the next attorney general in the coming weeks, the companies and their shareholders will have even more to celebrate. Last summer, the Justice Department announced it would stop contracting with the for-profit prison industry, whose facilities are more violent and less humane than government-run prisons. MJ> Step Aside, Steve King: Meet the Right's Most Powerful Immigration Foe. Bill Clark/CQ Roll Call It wasn't long ago that Sen. 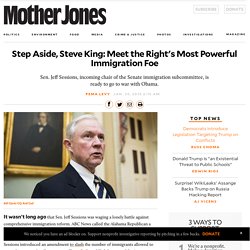 Jeff Sessions was waging a lonely battle against comprehensive immigration reform. ABC News called the Alabama Republican a "lone wolf" in his dogged quest to kill the Senate's immigration reform bill, which passed the upper chamber in June 2013 on a 68-32 bipartisan vote. At one point, Sessions introduced an amendment to slash the number of immigrants allowed to enter the country legally—not even Texas firebrand Ted Cruz voted for it. But Sessions' days of fighting immigration reform from the sidelines are over. "By choosing Sessions, Senate Republicans are handing over the agenda and a megaphone to their leading anti-immigrant voice," America's Voice, a pro-immigration-reform group, said in a seven-page memo circulated to reporters that enumerated Sessions' anti-immigration track record.

Everything You Need to Know About Jeff Sessions. On November 18, 2016, President-Elect Donald Trump announced that Alabama Senator Jeff Sessions will be his nominee for Attorney General of the United States. 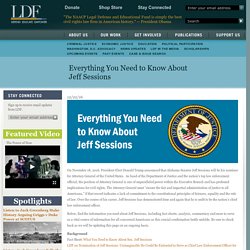 As head of the Department of Justice and the nation's top law enforcement official, the position of Attorney General is one of unparalleled power within the Executive Branch and has profound implications for civil rights. The Attorney General must "ensure the fair and impartial administration of justice to all Americans," if that record indicates a lack of commitment to the constitutional principles of fairness, equality and the rule of law. Over the course of his career, Jeff Sessions has demonstrated time and again that he is unfit to be the nation’s chief law enforcement officer. Below, find the information you need about Jeff Sessions, including fact sheets, analysis, commentary and more to serve as a vital source of information for all concerned Americans as this crucial confirmation battle unfolds.

Background. John Lewis -We Must Not Be Silent (Full Interview) Closed Sessions. On its own, the case might not have been enough to stain Sessions with the taint of racism, but there was more. 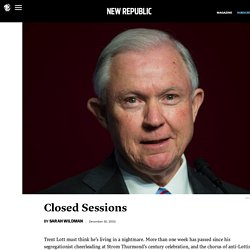 Senate Democrats tracked down a career Justice Department employee named J. Gerald Hebert, who testified, albeit reluctantly, that in a conversation between the two men Sessions had labeled the National Association for the Advancement of Colored People (NAACP) and the American Civil Liberties Union (ACLU) “un-American” and “Communist-inspired.” Hebert said Sessions had claimed these groups “forced civil rights down the throats of people.” In Sotomayor Hearings, Jeff Sessions Was Fixated on Discrimination Against White People. Charles Dharapak/AP With Sen. 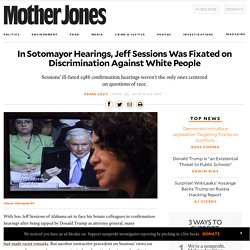 Jeff Sessions of Alabama set to face his Senate colleagues in confirmation hearings after being tapped by Donald Trump as attorney general, many comparisons are being made to the last time he sought confirmation, in 1986, when his nomination to a federal judgeship was derailed by numerous allegations that he had made racist remarks. But another instructive precedent on Sessions' views on race comes from a much more recent set of confirmation hearings, when Sessions challenged the Supreme Court nomination of Sonia Sotomayor. Republicans pushed back on President Barack Obama's 2009 nomination of Sotomayor by zeroing in on comments she had made about her Latina heritage.

They raised fears about reverse discrimination, suggesting that as a justice, she would give unfair preference to minorities. Politico> Sen. Jeff Sessions endorses Trump. Donald Trump won another major endorsement Sunday, surprising the political world when he walked onto the stage for a rally in Madison, Ala., with Alabama Sen. 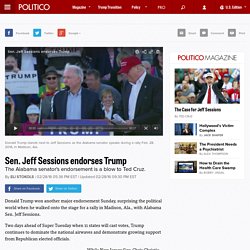 Many of those statements, they’re old, but they’re still troubling. . . . There are lots of questions that have to be asked. Let me give you one that relates to the old statements: What does he intend to do with the Civil Rights Division? I wouldn’t want to support him unless I was convinced that we would still have a strong Civil Rights Division in the Justice Department.” — Sen.

On immigration, Sen. Jeff Sessions tries to halt the inevitable- Dana Milbank. Not since George Wallace, perhaps, has an Alabamian taken as passionate a stand for a lost cause as the one Jeff Sessions is taking now. Bipartisan immigration legislation is making its way inexorably through the Senate Judiciary Committee. Although its ultimate fate is unclear, its passage by the committee is assured, and conservatives on the panel such as ranking Republican Chuck Grassley (Iowa) and Orrin Hatch (Utah) are doing what they can to improve the bill.