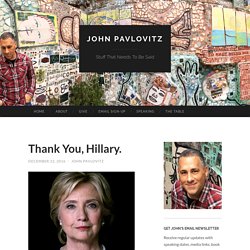 I’ve been meaning to write you for a while. I was thinking of you again today and I guess I just wanted to let you know that I appreciate you. I appreciate how hard you’ve worked for this country for the past five decades.I appreciate what you accomplished this year.I appreciate your dignity in the face of the most undignified behavior. I appreciate the seriousness with which you took the prospect of leading our nation.I appreciate the campaign of diversity, equality, and shared strength you ran with such grace.I appreciate you reminding America that it is already great. Clinton's Popular Vote Lead Is Going to Get a Lot Bigger. Morgan Freeman is voicing a new ad for Hillary Clinton. Morgan Freeman's voice is perhaps the most recognizable in America , and that voice is now telling you to vote for Hillary Clinton in the Democratic primaries. 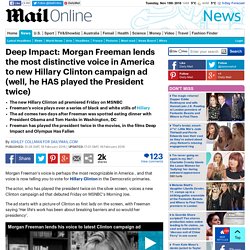 The actor, who has played the president twice on the silver screen, voices a new Clinton campaign ad that debuted Friday on MSNBC's Morning Joe. The ad starts with a picture of Clinton as first lady on the screen, with Freeman saying 'Her life's work has been about breaking barriers and so would her presidency'. Morgan Freeman lends his voice to latest Clinton campaign ad Loaded: 0% Progress: 0% MinimizeExpandClose The voice of God speaks: Morgan Freeman voices a new ad for Hillary Clinton.

The ad continues as a slideshow of black and white pictures of Hillary on the campaign trail meeting factory workers, smiling at babies and hugging voters. 'Together. The future: A photo of a young black girl holding up a sign reading 'Educators for Hillary' appears on the screen Race: The ad appears to be Clinton's latest pitch to black voters. Clinton announces Tim Kaine as VP pick. At a rally in Miami on July 23, Hillary Clinton introduced her running mate, Tim Kaine, one of the most qualified vice presidential candidates in history. 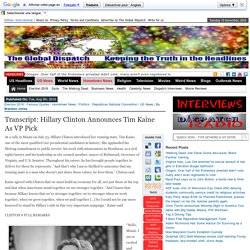 She applauded his lifelong commitment to public service: his work with missionaries in Honduras; as a civil rights lawyer and his leadership as city council member, mayor of Richmond, Governor of Virginia, and U.S. Senator. Throughout his career, he has brought people together to deliver for those he represents. “And that’s why I am so thrilled to announce that my running mate is a man who doesn’t just share those values, he lives them.” Clinton said. Hillary Clinton Speeches. Hillary Clinton. Clinton sweeps Sanders on 'Separation Tuesday' WEST PALM BEACH, Florida – Bernie Sanders’ upset in Michigan last week may have simply delayed the inevitable. 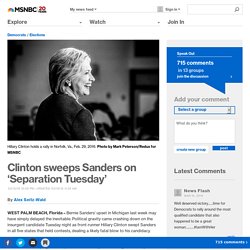 Political gravity came crashing down on the insurgent candidate Tuesday night as front-runner Hillary Clinton swept Sanders in all five states that held contests, dealing a likely fatal blow to his candidacy. Clinton headed into Tuesday’s contests with a more than 200 pledged delegates lead, and her campaign now expects to walk away from the night ahead by far more than 300 – double the largest lead Barack Obama ever had over Hillary Clinton in 2008. MSNBC Live, 3/15/16, 8:41 PM ET Hillary Clinton wins Ohio primary: NBC News NBC News projects Hillary Clinton wins the Ohio Democratic primary. Clinton for President. The next president will take office with bigoted, tribalist movements and their leaders on the march. 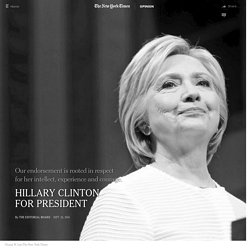 In the Middle East and across Asia, in Russia and Eastern Europe, even in Britain and the United States, war, terrorism and the pressures of globalization are eroding democratic values, fraying alliances and challenging the ideals of tolerance and charity. The 2016 campaign has brought to the surface the despair and rage of poor and middle-class Americans who say their government has done little to ease the burdens that recession, technological change, foreign competition and war have heaped on their families.

Over 40 years in public life, Hillary Clinton has studied these forces and weighed responses to these problems. Our endorsement is rooted in respect for her intellect, experience, toughness and courage over a career of almost continuous public service, often as the first or only woman in the arena. OPEN Timeline Mrs. Similarly, Mrs. Mrs. Clinton’s Substantial Popular Vote Win. Clinton’s Leaked Wall Street Speeches Reveal She Gets Wall Street. Now that a small portion of the speeches that Hillary Clinton has made to Wall Street have been leaked through hacked e-mails, it’s hard to discern why the Democratic nominee was so fastidiously paranoid about releasing the transcripts in the first place. 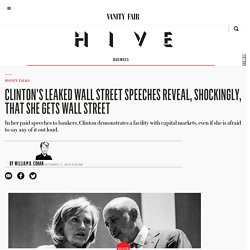 For years, there has been widespread speculation that Clinton must have engaged in extensive pandering in return for her $225,000 a pop speaking fee, or perhaps that she uttered statements that could have existentially undermined her candidacy. But while it may not have been wise to book a bunch of talks with financial elites in advance of a populist election season—no one has ever accused Clinton of profound political acuity—it seems like her greatest crime, at least according to these documents, is having a fairly nuanced understanding of capital markets.