Trump announced that he will nominate Betsy DeVos, a prominent advocate for school choice and charter schools, as education secretary.

“I am honored to work with the President-elect on his vision to make American education great again,” DeVos tweeted Wednesday.

“The status quo in ed is not acceptable.” Senate Democrats’ All Night Vigil Against DeVos. This is going down to the wire. 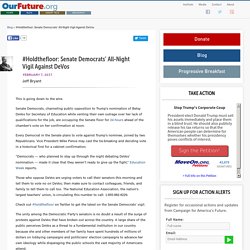 Senate Democrats, channeling public opposition to Trump’s nomination of Betsy DeVos for Secretary of Education while venting their own outrage over her lack of qualifications for the job, are occupying the Senate floor for 24 hours ahead of the chamber’s vote on her confirmation at noon. Every Democrat in the Senate plans to vote against Trump’s nominee, joined by two Republicans. Vice President Mike Pence may cast the tie-breaking and deciding vote in a historical first for a cabinet confirmation. Senate committee approves DeVos nomination. How Sen. Lamar Alexander slammed DeVos confirmation hearing through his committee. Republican Sen. 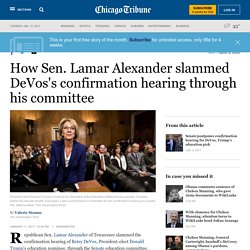 Lamar Alexander of Tennessee slammed the confirmation hearing of Betsy DeVos, President-elect Donald Trump's education nominee, through the Senate education committee, which he chairs - over the objections of Democrats who practically begged for more time to question her. Democratic members of the committee repeatedly asked for more time to ask DeVos questions during the hearing on Thursday evening. Over and over, he said he was sticking to the "rules" set for President Barack Obama's two education secretaries, Arne Duncan and John King Jr. and some past education nominees: Every member would get five minutes to ask questions, but only the chairman and the committee's top Democrat, Sen. Patty Murray of Washington, could get an extra five minutes. Public (School) Enemy No. 1: Billionaire Betsy DeVos, Trump’s Pick for Education Secretary. 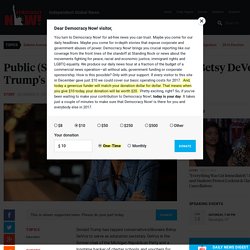 Copy may not be in its final form. NERMEEN SHAIKH: Donald Trump has tapped conservative billionaire Betsy DeVos to serve as education secretary. DeVos is the former chair of the Michigan Republican Party and a longtime backer of charter schools and vouchers for private and religious schools. In response, American Federations of Teachers President Randi Weingarten said, quote, "In nominating DeVos, Trump makes it loud and clear that his education policy will focus on privatizing, defunding and destroying public education in America," unquote. If confirmed by the Senate, DeVos could become the most anti-public school education secretary since the Office of Education was established in 1867. AMY GOODMAN: The DeVoses have bankrolled their school deregulation and privatization efforts through a dark money group called American Federation for Children, a major contributor to the right-wing corporate education movement. 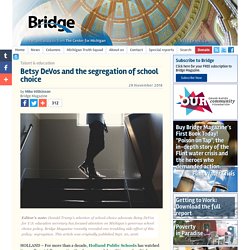 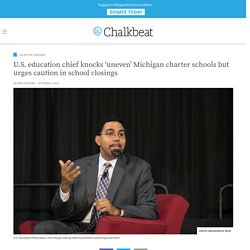 “The key question is: What are they being replaced with?” Asked U.S. What you should know about DeVos, and what her choice might tell us about his plans. Philanthropist Betsy DeVos, President-elect Donald Trump’s pick for education secretary, did not succeed in getting a school voucher program off the ground in her home state of Michigan. 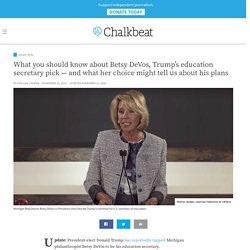 But her advocacy helped influence the program in neighboring Indiana, which is expansive, entrenched — and could be a model if Trump and DeVos move forward with trying to push a national voucher program. Here are six important things to know about vouchers in Indiana: Betsy DeVos not ready to back Donald Trump. Lansing — Betsy DeVos, a former Michigan Republican Party chair and GOP mega donor, isn’t ready to get behind Donald Trump as she prepares to head to Cleveland next week for the party’s formal nomination of the billionaire businessman for president. 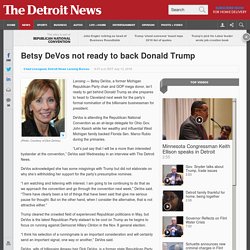 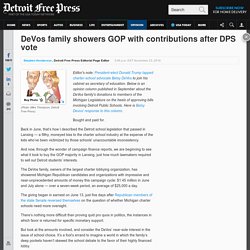 Below is an opinion column published in September about the DeVos family's donations to members of the Michigan Legislature on the heels of approving bills involving Detroit Public Schools. Here is Betsy Devos' response to this column. Bought and paid for. Back in June, that’s how I described the Detroit school legislation that passed in Lansing — a filthy, moneyed kiss to the charter school industry at the expense of the kids who’ve been victimized by those schools' unaccountable inconsistency.

And now, through the wonder of campaign finance reports, we are beginning to see what it took to buy the GOP majority in Lansing, just how much lawmakers required to sell out Detroit students’ interests. Betsy DeVos: Ohio’s Top Campaign Money Launderer, Trump’s Pick for Education Sec’y. Making Sense of DeVos Family Philanthropy. The more we write about the new philanthropy of recent years, the more we're struck by the role of wealthy family dynasties. 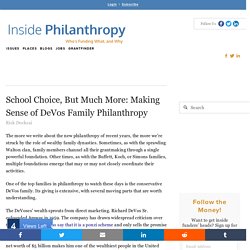 Sometimes, as with the sprawling Walton clan, family members channel all their grantmaking through a single powerful foundation. Other times, as with the Buffett, Koch, or Simons families, multiple foundations emerge that may or may not closely coordinate their activities. One of the top families in philanthropy to watch these days is the conservative DeVos family. Its giving is extensive, with several moving parts that are worth understanding. The DeVoses' wealth sprouts from direct marketing.

With this much wealth on hand, it's not surprising that the DeVoses are also heavy contributors to charity. Episode 517 with Lisa Grave. Episode 517 of the Matthew Filipowicz Show is now available to stream and download. 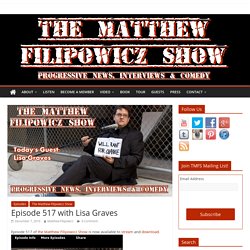 Coming up on today’s show we have Lisa Graves from the Center for Media and Democracy back on the show to discuss Donald Trump’s frightening choice to head the Department of Education, Betsy DeVos, as well as a disturbing Trump climate change memo. Plus, we’ll discuss David Waldman’s plan to get Obama’s Supreme Court nominee appointed. Remember, you can subscribe and podcast the show for free on iTunes, Stitcher and at www.matthewf.net. You can follow the show on Twitter, Facebook, Instagram, and Tumblr, You can watch video of the show on YouTube. Betsy DeVos says GOP should dump Agema; implies financial 'consequences' for intolerance. GRAND RAPIDS, MI — Well-known West Michigan business and political figure and major Republican Party donor Betsy DeVos has apparently had enough with Dave Agema. DeVos, former state GOP chair, told Detroit News columnist Nolan Finley that Agema should resign his position as national Republican Party Committeeman after his latest round of inflammatory remarks about gays and Muslims.

Her rebuke of Republican Party leadership for failure to condemn “intolerance and insensitivity” included the veiled threat of financial reprisals if Agema is not removed from his post somehow. “The expectation of leaders in a party is to stand up in situations like this,” she told the News. How and why Amway's DeVos family gives away billions. GRAND RAPIDS, MI -- Years ago, a Grand Rapids business owner was greeted by Rich DeVos with an expensive compliment. "You look like a million dollars," the Amway co-founder, Orlando Magic owner and Grand Rapids billionaire told Leslie Tassell, founder of autoparts maker Lescoa.

That was Tassell's cue to donate $1 million to a cause DeVos was supporting. Among West Michigan's wealthy, social clout doesn't come from the clothes you wear or car you drive. Influence comes from how much you give. And the DeVos name is at the pinnacle of social clout in West Michigan, along with other local wealthy and philanthropy-minded families such as Van Andel and Meijer. The DeVos family for the first time is shedding light on the totality of its philanthropy: nearly $1.2 billion in lifetime giving. That's what the family foundations reported to Forbes, which in October revealed that lifetime total and what the DeVoses gave in 2014, $94 million, ranking the family 20th on its annual Top 50 givers list. Michigan Falling Behind Nation in Early Reading. Secretary of Education Nominee Betsy DeVos: What You Need to Know. On November 23, 2016, President-Elect Donald Trump announced that Betsy DeVos, a billionaire philanthropist and education advocate from Michigan, will be his nominee for Secretary of Education.

The Department of Education's mission “is to promote student achievement and preparation for global competitiveness by fostering educational excellence and ensuring equal access.”[1] Policies that improve all students’ access to quality educational opportunities have enjoyed bipartisan support in previous administrations. To lead the charge in these efforts, any Secretary of Education nominee must have deep education policy expertise and a commitment to the principles of education equity, including eliminating exclusionary school discipline and testing practices. The Secretary must also be well equipped to closely monitor states’ implementation of the Every Student Succeeds Act of 2015, particularly the fair and efficient distribution of Title I funds to high poverty schools and school districts.

Sea of Charter Schools in Detroit Leaves Students Adrift. Then, at a bus stop for the private school, her daughter was recruited for a charter that promised college seminars and dual enrollment at local colleges — and rewarded her for enrolling with a raffle ticket for a $50 gift card. With all the new schools, Detroit has roughly 30,000 more seats, charter and traditional public, than it needs. The competition to get students to school on count day — the days in October and February when the head count determines how much money the state sends each school — can resemble a political campaign. Schools buy radio ads and billboards, sponsor count day pizza parties and carnivals. How Workable is Trumps $20 Billion School Choice Proposal?

UserID: iCustID: IsLogged: false IsSiteLicense: false UserType: anonymous DisplayName: Interview with Betsy DeVos, the Reformer. Betsy DeVos is a reformer. At Calvin College, the young Elisabeth Prince undertook her vocation, becoming involved with campus politics and remaining politically active ever since. For more than 30 years, Mrs. DeVos has led a variety of campaigns, party organizations, and political action committees, including six years as chairman of the Michigan Republican Party.

All Children Matter. DeVos vows to ‘end’ Common Core. Donald Trump welcomes Betsy DeVos to the stage during a rally Friday at DeltaPlex Arena in Grand Rapids, Mich. (AP) When Donald Trump was running for president, he said that should he win, he would “get rid” of the Common Core State Standards — as if the initiative had been mandated by the federal government. It actually was approved by state bodies, departments of education or legislatures.

No president can simply order it gone. Betsy DeVos, the Michigan billionaire whom the president-elect tapped to serve as education secretary, is now making the same pledge that Trump did. The Washington Examiner reported what DeVos said at the rally: “In deference to the U.S. The Core is a set of math and English language arts standards that were initially adopted fully by 45 states and the District of Columbia, with bipartisan support. A few states have in recent years dropped the Core, while others made minimal changes and gave the standards a new name. Local answer-sheet Dallas shooting updates true. The elephant in the room is DeVos. Senators press Betsy DeVos to pay $5.3 million fine. What Betsy DeVos did to education in Michigan — and what she might do as secretary of education.