TIME's Interview with Exiting Alaska Governor Sarah Palin. The Palins were staying with Sarah's in-laws Bob and Blanche Kallstrom when the soon-to-be-ex-governor of Alaska sat down for an interview. 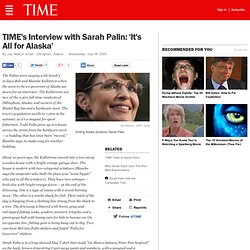 The Kallstroms are two of the 2,500 full-time residents of Dillingham, Alaska, and owners of the Bristol Bay Inn and a hardware store. The town's population swells to 7,000 in the summer, as it's a magnet for sport fishermen. Todd Palin grew up in a house across the street from the hardware store — a building that has since been "moved," Blanche says, to make way for another building. About 10 years ago, the Kallstroms moved into a two-story wooden house with a bright orange garage door. 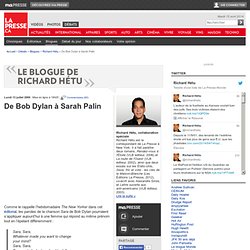 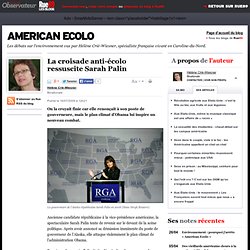 Sarah Palin - A 'Cap and Tax' Road to Economic Disaster - washin. There is no shortage of threats to our economy. 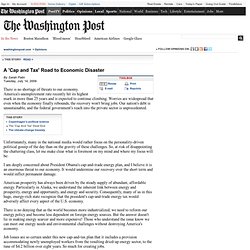 America's unemployment rate recently hit its highest mark in more than 25 years and is expected to continue climbing. Worries are widespread that even when the economy finally rebounds, the recovery won't bring jobs. Our nation's debt is unsustainable, and the federal government's reach into the private sector is unprecedented. Unfortunately, many in the national media would rather focus on the personality-driven political gossip of the day than on the gravity of these challenges. So, at risk of disappointing the chattering class, let me make clear what is foremost on my mind and where my focus will be: I am deeply concerned about President Obama's cap-and-trade energy plan, and I believe it is an enormous threat to our economy.

Gov. Parnell Faces A Post-Palin Alaska. Palin departing office amid biting criticism. ANCHORAGE — In Alaska, wildlife metaphors tend to be as abundant as their flesh-and-blood counterparts, and Republican Gov. 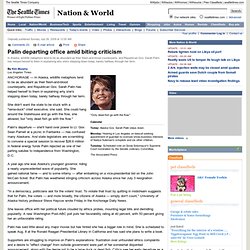 Sarah Palin has helped herself to them in explaining why she's stepping down today, barely halfway through her term. She didn't want the state to be stuck with a "lame-duck" chief executive, she said. She could hang around the Statehouse and go with the flow, she allowed, but "only dead fish go with the flow. " Palin's departure — she'll hand over power to Lt. Gov. A year ago she was Alaska's youngest governor, riding a nearly unprecedented wave of popularity. "In a democracy, politicians ask for the voters' trust. She leaves office with her political future clouded by ethics probes, mounting legal bills and dwindling popularity.

Palin Plays Grievance Card. A Vote of No Confidence for Palin - The Caucus Blog - NYTimes.co. Here’s one top Republican Sarah Palin should not be looking to should she run for president in 2012: Steve Schmidt, who was the chief strategist for the 2008 presidential campaign of Senator John McCain of Arizona. 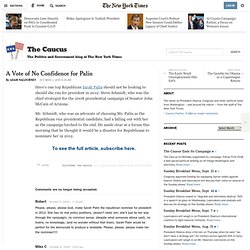 Mr. Schmidt, who was an advocate of choosing Ms. Palin as the Republican vice presidential candidate, had a falling out with her as the campaign lurched to the end. He made clear at a forum this morning that he thought it would be a disaster for Republicans to nominate her in 2012. “I think she has talents,” Mr. He said that Ms. “I don’t think it’s inconceivable that she could be the Republican nominee for president of the United States,” Mr.