Rust fungi are one of the most diverse groups of plant pathogens. 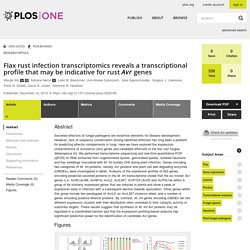 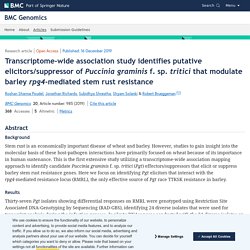 These original assumptions followed the central dogma of Flor’s gene-for-gene hypothesis [47], which has held up in characterized Flax-flax rust [37] and wheat-wheat stem rust [36, 38] pathosystem interactions. However, gene expression comparisons of both the host and pathogen during the infection process with a set of RMRL and Rpg1 virulent -vs- avirulent isolates (Table 2; Additional file 1: Table S13) led to the development of the different hypothesis; dominant virulence genes suppress defense mechanisms in barley that are elicited by the barley stem rust resistance gene Rpg5 at the RMRL. A single time point (5DPI), that had shown effector expression during the colonization process [17] was used for analysis.

Host-parasite interaction during subepidermal sporulation and pustule opening in rust fungi ( Pucciniales ) Molecular Characterization of International Collections of the Wheat Stripe Rust Pathogen Puccinia striiformis f. sp. tritici Reveals High Diversity and Intercontinental Migration. Endemic and panglobal genetic groups, and divergence of host-associated forms in worldwide collections of the wheat leaf rust fungus Puccinia triticina as determined by genotyping by sequencing. Genome compartmentalization predates species divergence in the plant pathogen genus Zymoseptoria. Cryptosexuality and the Genetic Diversity Paradox in Coffee Rust, Hemileia vastatrix. Abstract Background Despite the fact that coffee rust was first investigated scientifically more than a century ago, and that the disease is one of the major constraints to coffee production - constantly changing the socio-economic and historical landscape of the crop - critical aspects of the life cycle of the pathogen, Hemileia vastatrix, remain unclear.

The asexual urediniospores are regarded as the only functional propagule: theoretically, making H. vastatrix a clonal species. However, the well-documented emergence of new rust pathotypes and the breakdown in genetic resistance of coffee cultivars, present a paradox. Methods and Results Here, using computer-assisted DNA image cytometry, following a modified nuclear stoichiometric staining technique with Feulgen, we show that meiosis occurs within the urediniospores. Conclusions Editor: Kirsten Nielsen, University of Minnesota, United States of America Received: June 6, 2011; Accepted: September 26, 2011; Published: November 15, 2011. Emergence of the Ug99 lineage of the wheat stem rust pathogen through somatic hybridisation. Prospects for Durable Resistance Against an Old Soybean Enemy: A Four-Decade Journey from Rpp1 (Resistance to Phakopsora pachyrhizi) to Rpp7. Soybean rust (SBR), caused by Phakopsora spp., is a major global concern for soybean producers.

SBR causing fungi are polycyclic and obligate biotrophs, rendering the study of their biology particularly tedious. Over the past four decades, substantial progress has been made towards understanding the epidemiology of the disease, the identification of sources of resistance, and the mapping of soybean loci conferring resistance to P. pachyrhizi (Rpp genes), since this species is particularly well established and widespread in many soybean growing areas. Although host-plant resistance is generally considered as the most desirable solution from an environmental, economic, and social perspective, other disease control approaches such as agronomic practices and chemical application are also important, and influence rust epidemiology as well as the durability of host plant resistance. Leaf rust ( Puccinia triticina) mediated RNAi in wheat ( Triticum aestivum L.) prompting host susceptibility. 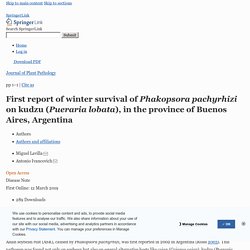 A comparison of isozymes of Phakopsora pachyrhizi from the eastern hemisphere and the new world. Duplications and losses in gene families of rust pathogens highlight putative effectors. Introduction Rust fungi are plant infecting filamentous fungi in the order Pucciniales (Basidiomycota) that are unified by obligate biotrophy (Voegele and Mendgen, 2011). 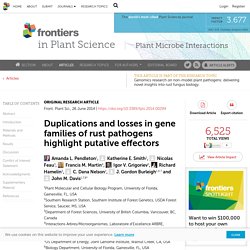 This form of pathogenicity requires a live host to establish a parasitic relationship. This is accomplished through the establishment of a molecularly intimate interaction at the host-pathogen interface characterized by the secretion of an arsenal of proteins from the pathogen that suppress host defense mechanisms and promote the acquisition of essential nutrients by the pathogen (Dodds et al., 2009; Stergiopoulos and de Wit, 2009). Such proteins, termed effectors, are thought to establish and maintain a compatible interaction between the pathogen and host. 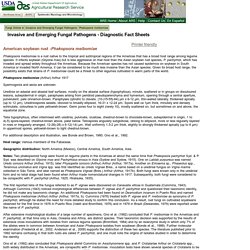 It infects soybean (Glycine max) but is less aggressive on that host than the Asian soybean rust species, P. pachyrhizi, which has invaded and spread widely throughout the Americas. Because the American species has not caused epidemics on soybean in South America or invaded North America, it can be considered to be much less invasive than the Asian species. Given its broad host range, the possibility exists that strains of P. meibomiae could be a threat to other legumes cultivated in warm parts of the world. Phakopsora meibomiae (Arthur) Arthur 1917 Spermogonia and aecia are unknown. Telia hypophyllous, often intermixed with uredinia, pulvinate, crustose, chestnut-brown to chocolate-brown, subepidermal in origin, 1 to 4(-5) spore-layered, chestnut-brown above, paler below. First Report of Phakopsora pachyrhizi Telia on Kudzu in the United States. Draft genome sequence resource of switchgrass rust pathogen, Puccinia novopanici isolate Ard-01. 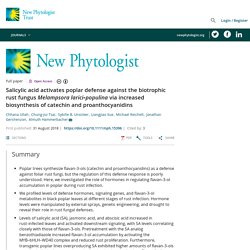 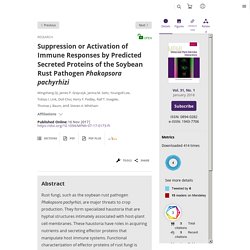 Unraveling the functions of effectors in plants is necessary for understanding the mechanisms that control virulence and pathogenicity and is expected to aid in the development of plant disease resistance (Dangl et al. 2013).