The Crux of Rosicrucianism. Rosicrucianism, like Hermetism (or Hermeticism) and Gnosticism, is something that means different things, depending on whom you ask and about when you are speaking. 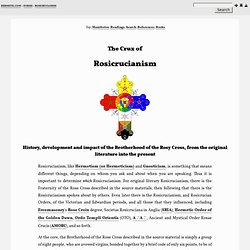 Thus it is important to determine which Rosicrucianism. Heinrich Khunrath's Cosmic Dew - 09_heinrichk_cosmic_dew_052411.pdf. The Rosy Cross Unveiled. The Hieroglyphic Monad - deemonad.pdf. English translation of the Rosarium philosophorum\374 - English translation of the Rosarium philosophorum.pdf. The 'Opus majus' of Roger Bacon, ed - Bacon_Opus Majus I.pdf. The Real History of the Rosicrucians Index. 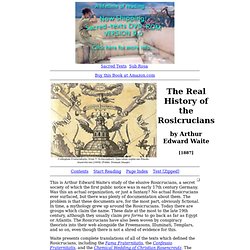 Was this an actual organization, or just a fantasy? No actual Rosicrucians ever surfaced, but there was plenty of documentation about them. The Secret Doctrine of the Rosicrucians Index. Sacred Texts Sub Rosa Buy this Book at Amazon.com Contents Start Reading Page Index Text [Zipped] This is one of the numerous Yogi Publication Society (YPS) books which have been attributed to William Walker Atkinson under pseudonym. 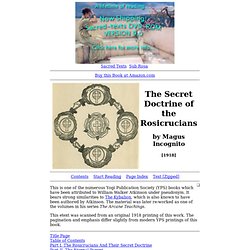 It bears strong similarities to The Kybalion, which is also known to have been authored by Atkinson. With the Adepts Index. Contents Start Reading Page Index Text [Zipped] Franz Hartmann was a 19th century Bavarian physician, theosophist and writer. 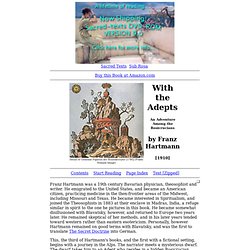 He emigrated to the United States, and became an American citizen, practicing medicine in the then-frontier areas of the Midwest, including Missouri and Texas. He became interested in Spiritualism, and joined the Theosophists in 1883 at their enclave in Madras, India, a refuge similar in spirit to the one he pictures in this book. He became somewhat disillusioned with Blavatsky, however, and returned to Europe two years later. He remained skeptical of her methods, and in his later years tended toward western rather than eastern esotericism. In the Pronaos of the Temple of Wisdom Index. 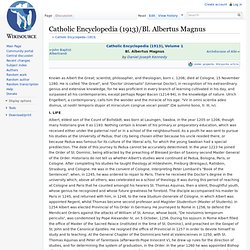 He is called "the Great", and "Doctor Universalis" (Universal Doctor), in recognition of his extraordinary genius and extensive knowledge, for he was proficient in every branch of learning cultivated in his day, and surpassed all his contemporaries, except perhaps Roger Bacon (1214-94), in the knowledge of nature. Ulrich Engelbert, a contemporary, calls him the wonder and the miracle of his age: "Vir in omni scientia adeo divinus, ut nostri temporis stupor et miraculum congrue vocari possit" (De summo bono, tr. The Rosicrucians: Part I: Chapter I. Critics of the Rosicrucians Criticized. Sacred Texts Sub Rosa Index Previous Next Buy this Book at Amazon.com p. 1 THAT modern science, spite of its assumptions and of its intolerant dogmatism, is much at fault--nay, to a great extent a very vain thing--is a conclusion that often presents itself to the minds of thinking persons. 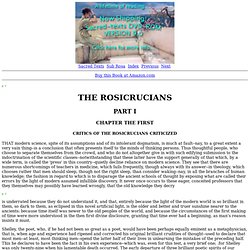 Thus thoughtful people, who choose to separate themselves from the crowd, and who do not altogether give in with such edifying submission to the indoctrination of the scientific classes--notwithstanding that these latter have the support generally of that which, by a wide term, is called the 'press' in this country--quietly decline reliance on modern science. P. 2 p. 3 great, reputations will be diminution and disappearance. From this obstinacy and conceit arise such underrating and false comment as is implied in the following p. 4 p. 5 written much more fully of it from other means; for The Spectator's account is very full of errors, and was evidently gained afar off, and merely from hearsay, as it were. The Alchemical Dream: by Erik Davis. Sometime around 1996, the psychedelic raconteur Terence McKenna set off to Europe with a small film crew in order to make a movie about a poignant and esoteric period of European history that the great scholar Frances Yates dubbed “the Rosicrucian Enlightenment.” 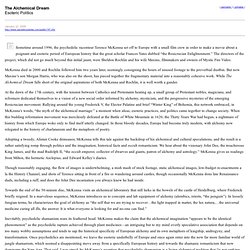 The directors of the project, which did not go much beyond this initial jaunt, were Sheldon Rochlin and his wife Maxine, filmmakers and owners of Mystic Fire Video. McKenna died in 2000 and Rochlin followed him two years later, seemingly consigning the hours of unused footage to the proverbial dustbin. But now Maxine’s son Morgan Harris, who was also on the shoot, has pieced together the fragmentary material into a reasonably cohesive work. An Analysis of Tarot Cards by Manly P. Hall. Spinoza’s Rose. Spinoza would sign his letters with the above image of a rose and the word “caute” (Latin for caution, carefully, beware). 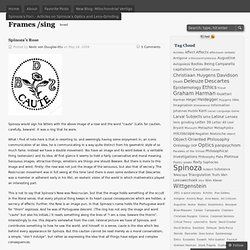 It was a ring that he wore. What I find of note here is that in resorting to, and seemingly having some enjoyment in, an iconic communication of an idea, he is communicating in a way quite distinct from his geometric style of so much fame. Instead we have a double movement. You have an image and its word below it, a veritable thing (extension) and its idea. Af first glance it seems to hold a fairly conservative and moral meaning.