Lamina Design. Design tools for inflatable structures. CNC routing with Grasshopper for Rhino : Ponoko Community Hub. Simulating Water Drops on Wood. Step 1: To begin you will need to find a source image of water drops so that you can study the relationship of the wave spacing and intensity. 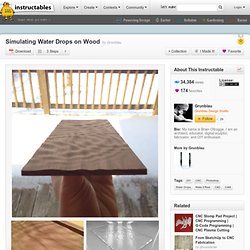 You might find one that is better than the one I used. Step 2: Bring that image into Photoshop and draw vertical lines at the peaks and valleys of the waves. Step 3: Select the Gradient Tool. Step 4: Click on the window in the options bar that shows the active gradient ramp. This opens the Gradient Editor Dialogue box. Step 5: Click underneath the gradient bar to add more color swatches. Step 6: Expand the window horizontally until the gradient bar spans these vertical lines representing the peaks and valleys.

Step 7: We will now define the colors of these swatches keeping in mind the visual reference of the source water drop image. The values I used were the following from left to right. another way to look at this to get an idea of relative amplitude of the waves... CAD addict: Rhino Plugins: Paneling Tools. Rhino Tech Tips: 3D puzzles with Grasshopper! VOXEL3D Especialistas Rhino Cursos - Bogota [Colombia] - Caracas [Venezuela] - Rhinoceros ARTC Authorized Rhinoceros Training Center. E, Catia, Inventor, Rino & other 3D CAD Applications. ModeLab. A technology publication created & maintained by case.

Tectónicas Digitales. Computational Design Lab. The goal of this project is developing a wireless glove and a software framework to manipulate a parametric model in Rhino 3D. 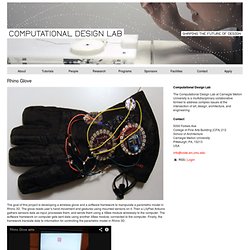 The glove reads user’s hand movement and gestures using mounted sensors on it. Then a LilyPad Arduino gathers sensors data as input, processes them, and sends them using a XBee module wirelessly to the computer. The software framework on computer gets sent data using another XBee module, connected to the computer. Finally, the framework translate data to information for controlling the parametric model in Rhino 3D. 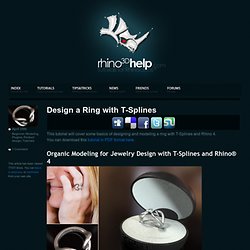 The best way to read this tutorial about how to model a ring using T-Splines is by looking at the 3D model at the same time. ParametricModel - a library of parts. Resources. Engines with extraordinary attributes Torque-FreeVibration-FreeOil-FreeAir CooledLight WeightHigh EfficiencyHigh Power-to-Weight Ratio {Copyright (C) 2007 McVan Aerospace, LLC. 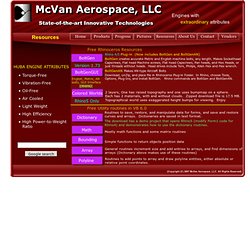 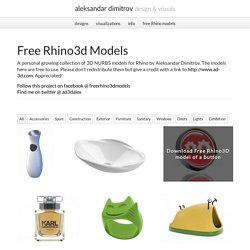 The models here are free to use. Please don’t redistribute them but give a credit with a link to Appreciated! Follow this project on facebook @ freerhino3dmodelsFind me on twitter @ ad3dalex All Accessories Sport. Creators of V-Ray - 3D Rendering Software. Tuk Tuk. MATSYS. Plugins for Rhino and SketchUp. The plug-in community service for Rhino. Grasshopper - generative modeling for Rhino. DIVA for Rhino - Home. 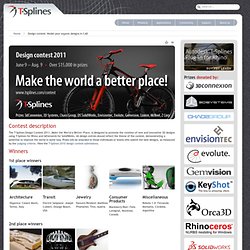 All design entries should reflect the theme of the contest, demonstrating a potential to improve the world in some way. Prizes will be awarded to those individuals or teams who submit the best designs, as measured by the judging criteria. Assembly Plugin for Rhino. Introduction Rhinoceros1 is a 3D computer-aided design (CAD) application developed for Windows since 1992 by Robert McNeel and Associates (Seattle, WA, USA)2.

It is popularly known as â€œRhinoâ€, and is used by more than 150,000 professionals around the globe for its powerful freeform modeling. Rhinoâ€™s license fees start below $1,000, yet its functionality is similar to that found in products typically costing 20 to 50 times more. It is based on the open 3DM file format, which is available to any software developer for reading/writing in the framework of the openNURBS initiative3.