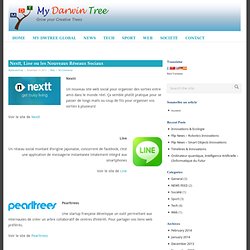 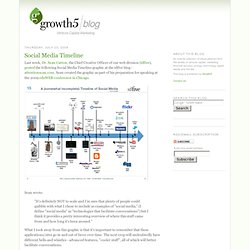 Sean Carton, the Chief Creative Officer of our web division (idfive), posted the following Social Media Timeline graphic at the idfive blog - attentionscan.com. Sean created the graphic as part of his preparation for speaking at the 2009 eduWEB conference in Chicago. Sean wrote: "It's definitely NOT to scale and I'm sure that plenty of people could quibble with what I chose to include as examples of "social media," (I define "social media" as "technologies that facilitate conversations") but I think it provides a pretty interesting overview of where this stuff came from and how long it's been around.

" What I took away from this graphic is that it's important to remember that these applications/sites go in and out of favor over time. As marketers we need to put the product where the right audience will see it, hear it, read it. Social media infographic. Social Media Year Infographic. Much has changed over the last year in social media. 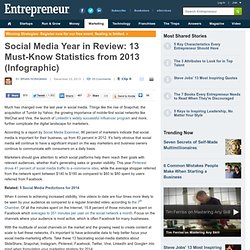 Things like the rise of Snapchat, the acquisition of Tumblr by Yahoo, the growing importance of mobile-first social networks like WeChat and Vine, the launch of LinkedIn's widely successful Influencer program and more, further complicate the digital landscape for marketers. According to a report by Social Media Examiner, 86 percent of marketers indicate that social media is important for their business, up from 83 percent in 2012. It's fairly obvious that social media will continue to have a significant impact on the way marketers and business owners continue to communicate with consumers on a daily basis. Socialmediatl_05. Socialmedia_evolution. The History and Evolution of Social Media an Infographic. The History and Evolution of Social Media an Infographic Social Media are Internet sites where people interact freely, sharing and discussing information about each other and their lives, using a multimedia mix of personal words, pictures, videos and audio. 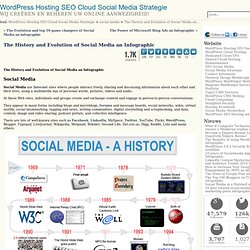 When You Fall in Love, This Is What Facebook Sees - Robinson Meyer. “During the 100 days before the relationship starts, we observe a slow but steady increase in the number of timeline posts shared between the future couple.” 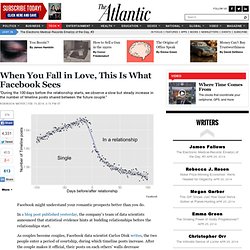 Facebook Facebook might understand your romantic prospects better than you do. In a blog post published yesterday, the company’s team of data scientists announced that statistical evidence hints at budding relationships before the relationships start. As couples become couples, Facebook data scientist Carlos Diuk writes, the two people enter a period of courtship, during which timeline posts increase. After the couple makes it official, their posts on each others’ walls decrease—presumably because the happy two are spending more time together.

In the post on Facebook’s data science blog, Diuk gives hard numbers: During the 100 days before the relationship starts, we observe a slow but steady increase in the number of timeline posts shared between the future couple. You can see these data in the chart above. Vine.