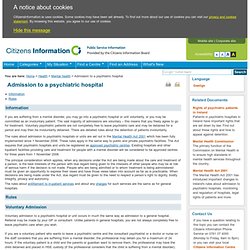 Referral may be made by your GP or consultant. Unlike patients in general hospitals, you are not always completely free to leave psychiatric care when you wish. If you are a voluntary patient who wants to leave a psychiatric centre and the consultant psychiatrist or a doctor or nurse on the staff considers that you are suffering from a mental disorder, the professional may detain you for a maximum of 24 hours. The consultant psychiatrist must either discharge you or arrange for an examination by another consultant psychiatrist. Involuntary Admission Under the Mental Health Act 2001, you may be involuntarily admitted and detained in an approved psychiatric centre if you are suffering from a mental disorder. NATIONAL CENTER for PTSD Home. Ptsd. Posttraumatic Stress Disorder Symptoms, Causes, Treatment - What is the treatment for PTSD? on MedicineNet. How is PTSD assessed? 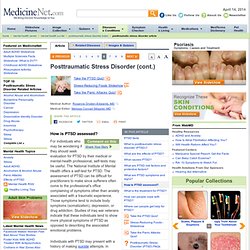 For individuals who may be wondering if they should seek evaluation for PTSD by their medical or mental-health professional, self-tests may be useful. The National Institute of Mental Health offers a self-test for PTSD. The assessment of PTSD can be difficult for practitioners to make since sufferers often come to the professional's office complaining of symptoms other than anxiety associated with a traumatic experience. Those symptoms tend to include body symptoms (somatization), depression, or drug addiction.

Studies of Iraq war veterans indicate that these individuals tend to show more physical symptoms of PTSD as opposed to describing the associated emotional problems. Individuals with PTSD may present with a history of making suicide attempts. Most practitioners who examine a child or teenager for PTSD will interview both the parent and the child, usually separately, in order to allow each party to speak freely. United Children of Veterans. PTSD & The Brain. Bet you didn’t know that the psychological experience of trauma can actually cause neurological changes, did you? 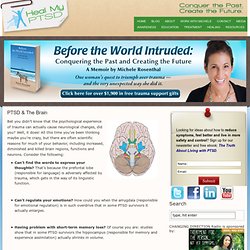 Well, it does! All this time you’ve been thinking maybe you’re crazy, but there are often scientific reasons for much of your behavior, including increased, diminished and killed brain regions, functions and neurons. Consider the following: Can’t find the words to express your thoughts? That’s because the prefontal lobe (responsible for language) is adversely affected by trauma, which gets in the way of its linguistic function.Can’t regulate your emotions? Knowing that there’s a biology to trauma lets you understand in a scientific sense why you can’t ’just get over it.’ Our free radio show archives, YOUR LIFE AFTER TRAUMA, feature experts discussing many aspects of how trauma impacts the brain, including how and why that impact leads to PTSD. 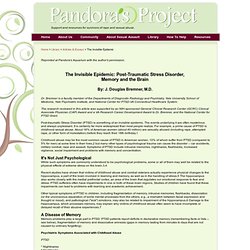 Dr. Bremner is a faculty member of the Departments of Diagnostic Radiology and Psychiatry, Yale University School of Medicine, Yale Psychiatric Institute, and National Center for PTSD-VA Connecticut Healthcare System. The research reviewed in this article was supported by an NIH-sponsored General Clinical Research Center (GCRC) Clinical Associate Physician (CAP) Award and a VA Research Career Development Award to Dr. Bremner, and the National Center for PTSD Grant. Imaging Ties PTSD to Altered Brain Function  PTSD & The Brain: How Transcendental Meditation can help. Now more than ever we are aware of the impact of post-traumatic stress disorder (PTSD) on veterans returning from the front lines of wars in the middle east, raging for the last ten years. 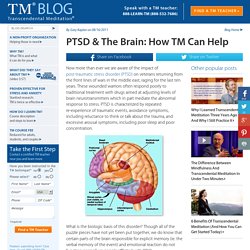 These wounded warriors often respond poorly to traditional treatment with drugs aimed at adjusting levels of brain neurotransmitters which in part mediate the abnormal response to stress. PTSD is characterized by repeated re-experience of traumatic events, avoidance symptoms, including reluctance to think or talk about the trauma, and excessive arousal symptoms, including poor sleep and poor concentration. What is the biologic basis of this disorder? Though all of the puzzle pieces have not yet been put together, we do know that certain parts of the brain responsible for explicit memory (ie. the verbal memory of the event) and emotional reaction do not function normally in people afflicted with PTSD. 1. Iraq war Veteran David George speaks out about PTSD and the effect of Transcendental Meditation: Dr. Why Don't All Traumatized People Develop PTSD? - Psychiatry. 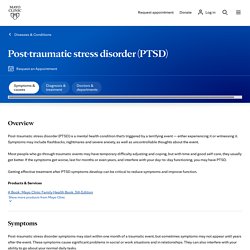 Symptoms may include flashbacks, nightmares and severe anxiety, as well as uncontrollable thoughts about the event. Many people who go through traumatic events have difficulty adjusting and coping for a while. But with time and taking care of yourself, such traumatic reactions usually get better. In some cases, though, the symptoms can get worse or last for months or even years. Sometimes they may completely shake up your life. NATIONAL CENTER for PTSD Home.