If you are worried about correlations this week have ago through the attached web page on correlation - it's nice and clear and covers everything we will be studying. – laurashelley

Here is a tick off what you need to know sheet for correlations. 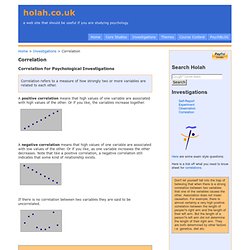 Don't let yourself fall into the trap of believing that when there is a strong correlation between two variables that one of the variables causes the other. Association does not mean causation. For example, there is almost certainly a very high positive correlation between the length of people? S right arm and the length of their left arm. A matching coefficient quiz. When conducting correlational analysis it is important to operationalise the variables.

Reliability 101. Validity. Reliability. Observation. Ext variables 2012. Experimental methodology. Types of Data: Nominal, Ordinal, Interval/Ratio - Statistics Help. Psychological Research - Crash Course Psychology #2. Ethical issues in psychology & social research. Five secrets to revising that can boost your grades. How do you get the most out of your revision time, and end up with the best grades you can? 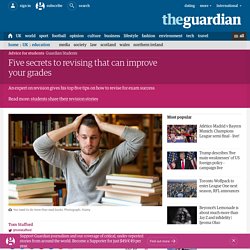 Or, if you're a different sort of student, how can you get the same grades you're getting now, but spend less time revising? Either way, you need to know how to learn better. And fortunately, decades of research carried out by psychologists about learning and memory has produced some clear advice on doing just that. As an experimental psychologist, I am especially interested in learning. Most research on learning is done in a lab, with volunteers who come in once or twice to learn simple skills or lists of words. Wouldn't it be better, I thought, if we could study learning by looking at a skill people are practising anyway?

Computer games provide a great way to study learning: they are something people spend many hours practising, and they automatically record every action people take as they practise. So here are my five evidence-based tips on how to learn: 1. 2. 3. Simpsons sampling. Gimme gimme gimme: how to increase your willpower. Two varieties of human emerge from the pages of The Marshmallow Test, a new book by the esteemed psychologist professor Walter Mischel. 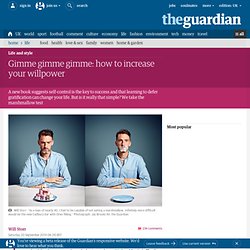 The first kind is optimistic, hopeful for the future. They're more likely to be successful in school, work and love. They're also thinner, calmer, more sociable, less likely to be addicted and better savers of money. The other kind of human is the other kind of human. And, yes, there I was, deconstructed across the pages in the mercilessly rational tone of the scientist: the creature who couldn't concentrate at school, failed at education, was "rejection-sensitive" and struggled with alcohol, drugs, petty criminality, fat, love, sugar and friends. I've arranged to meet Mischel in a coffee bar in the low-lit rear of a Soho hotel. I have a personal interest in those same questions, for my daily life is pocked with failures of self-control. Right. Mischel explains how he manipulated his own hot/cold systems when he was giving up smoking. Duck Quacks Don't Echo TV Series - Episodes. Duck Quacks Don't Echo Season 2 | Episode 6 Programme synopsis not currently available Not currently available Season 2 | Episode 5 New & Exclusive. 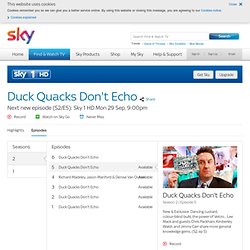 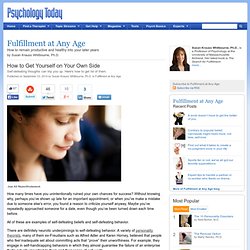 Without knowing why, perhaps you’ve shown up late for an important appointment, or when you've make a mistake due to someone else's error, you found a reason to criticize yourself anyway. Maybe you’ve repeatedly approached someone for a date, even though you’ve been turned down each time before. All of these are examples of self-defeating beliefs and self-defeating behavior. There are definitely neurotic underpinnings to self-defeating behavior. The classic example of this type of self-handicapping is the student who doesn’t study for an important test and then, as a result, performs poorly.