Calypso II. Calypso II, " Watchdog of the Planet ", will be an observation platform where Captain Cousteau's spirit of environmental and human discovery will live on. 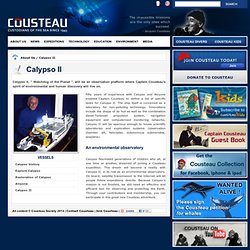 Fifty years of experience with Calypso and Alcyone enabled Captain Cousteau to define a list of specific tasks for Calypso II. The ship itself is conceived as a laboratory for non-polluting technology. Innovations include the shape of its hull as well as the combination diesel-Turbosail propulsion system, navigation equipment and computerized monitoring networks. Calypso II will be spacious enough to house scientific laboratories and exploration systems (observation chamber aft, helicopter, autonomous submersible, seaplane). An environmental observatory. Magnus effect. The Magnus effect, depicted with a back-spinning cylinder or ball in an air stream. 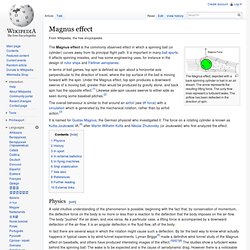 The arrow represents the resulting lifting force. The curly flow lines represent a turbulent wake. The airflow has been deflected in the direction of spin. The Magnus effect is the commonly observed effect in which a spinning ball (or cylinder) curves away from its principal flight path.